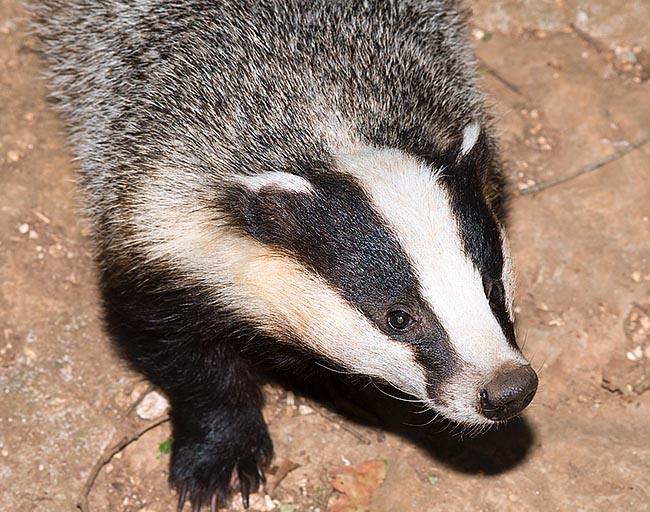 The European badger (Meles meles Linnaeus 1758) is a relatively big mustelid belonging to the order of the Carnivores (Carnivora), to the family of the Mustelids (Mustelidae), to the genus Meles and to the species Meles meles.

Various are the reported subspecies:

The name of the genus and of the species “meles” is the name the Romans were giving to the badger.

The geographic distribution of the badger interests the Palearctic region, excepting the northernmost territories, various Mediterranean islands and North Africa. Its range extends in the temperate Europe, from central Scandinavia to the Mediterranean regions, including the Aegean Sea islands and Crete. In Asia, the species is present from Siberia, but its northernmost lands, up to Korea and Japan and, southwards, up to Tibet, northern Burma and southern China. Furthermore, it is present also in Asia Minor, Palestine and Persia.

The natural habitat of the badger is the forestall one, of plain as well as of mountain, from the sea level up to about 2000 metres of altitude. It prefers the broad-leaved trees or mixed ones woods even if limited extension, alternated with open zones, bushy, stony, shrubby and uncultivated. In the northern regions it usually frequents also the conifers woods. It usually avoids the intensely cultivated lands frequenting the agricultural areas, close to its den, looking for food. 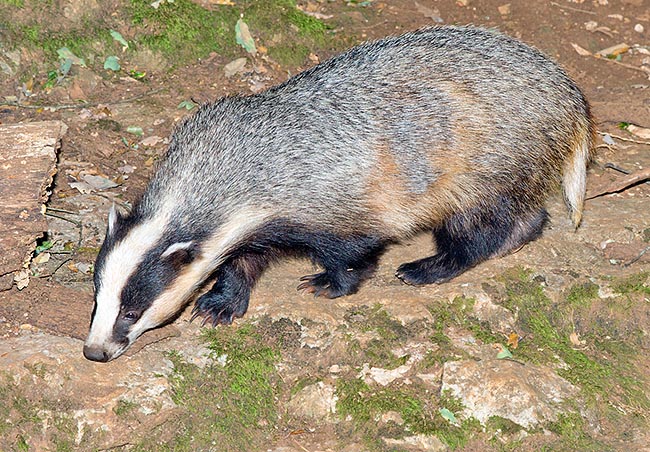 Careful and prudent, of night habits, has exceptional sense of smell © Giuseppe Mazza

The badger has a bulky and heavy structure, has a head-body length of about 60-80 cm, the head is elongated and pointed, the tail is blunt and short, about 15-20 cm, and has a height at the withers of about 30 cm. Its weight is approximately of 10-20 kg.

The ears are small and round (3-5 cm) but emerge from the fur. The eyes are small but with round pupil and dark brown iris (the badger eyesight is not excellent and it is rather short-sighted).

The limbs are short and the feet have 5 fingers with robust nails, suitable for digging. The hind feet are slightly longer (8,5-11 cm) than the fore ones and the plantar surface is glabrous.

The fur is rough and rather sparse, has guard hairs longer on the sides of the body. In the lower parts, the mantle is so sparse that occasionally it lets see the skin.

The dominant colours of the upper parts are the grizzled black and the dirty white, both paler on the sides. The throat, the lower parts and the limbs are blackish.

The head is white, with two characteristic black bands that, starting little after the nostrils, cross longitudinally and in parallel the two sides of the head, passing through the ocular and auricular region up to the sides of the neck. These two dark bands widen slightly proceeding backwards. Between the two black bands and on the sides of the same are other bands (3) of white colour contrasting with the two black ones; these white-black bands, together, confer an “arrow-like” look to the snout, already triangular, of the badger.

The ears are black, grizzled at the base and dirty white at the apex. The truffle of the nose is fairly developed. Sexes are similar. 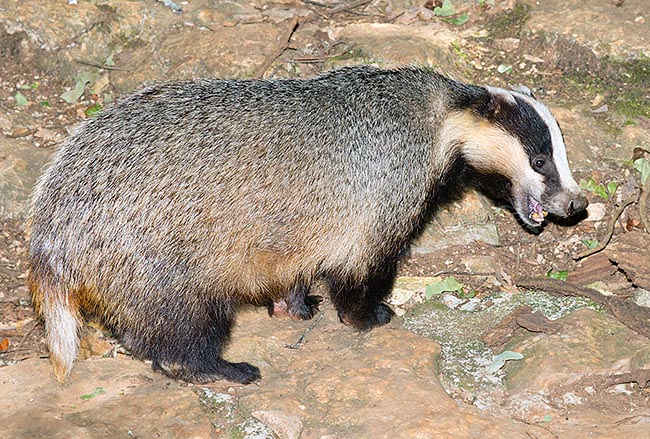 The badger is of elusive nature, cautious and prudent and of essentially crepuscular and nocturnal habits.

It leads a solitary life or lives in small familiar groups, which may share the same den, gregarious behaviours usually manifest in autumn. The vocal communications of this mustelid are particularly noisy and variously expressive. Its vocalizations consist in grunts, puffs, snorts and acute yells when irritated. During the mating season, it frequently emits a shrill cry resembling the cry of a child.

The badger walks at pace, at trot or heavy gallop. Only occasionally it climbs the plants, if necessary is able to swim. Its 5-7 cm long footprints are easy to recognize (semi-plantigrade): wide with long fingers and nails, well evident are the plantar and digital pads (due to the absence of hair).

The badger is an excellent burrower and constructor of dens. The burrows are realized with its powerful nails. The dens are usually placed where the soil is dry and sandy, along riverbanks or on sunny slopes rich of vegetation whose roots compact the earth. Due to the remarkable quantity of soil it removes, it is easy to detect the locations where the dens have been built especially if these are frequented for long periods by numerous successive generations as they assume important developments due to the continuous modifications and expansions to which they are submitted; they are real labyrinths of passages and chambers developing horizontally for some tens of metres and up to 5-6 metres in depth. 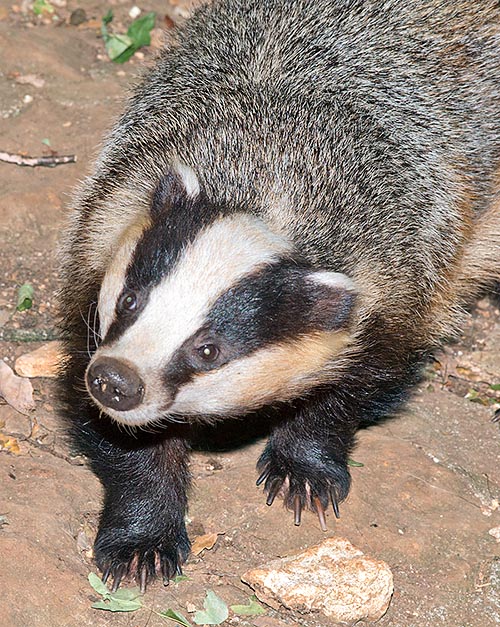 The ample chambers are the real and proper refuge where the animal stays, whilst the numerous and ramified tunnels have the purpose of allowing the access and the exit, as well as of acting as ventilation chimneys. The main chamber is covered by huge quantities of leaves, moss, grass and other vegetal material the badger takes into the den dragging it walking backwards and holding it between the chin and the chest. This material is often piled up over a platform of twigs which, keeping it raised, prevents the litter to absorb humidity from the soil. The litter is periodically trimmed with care and renewed.

During the breeding of puppies there is also a small room acting as latrine. The den of the badger is consequently very comfortable, provided with warm and dry shelters, where the animals can spend calmly hours of rest. Close to some entrances to the den, outside, are present holes for the excreta. It may happen that the badger shares some parts of its own den, separately, with foxes (Vulpes vulpes). During the cold season, the badger in the den spends periods of inactivity which may last for some months in the regions with particularly rigid climate.

It does not fall in a true hibernation; it yields to a deep sleep during which the metabolism gets a strong slowdown. In this period, as it does not eat, it consumes the reserves of body fat accumulated in autumn. The populations of this species living in the southernmost of the range keep active all the year round. The badger, in the territory where it lives, crosses fixed paths, often recognizable.

The food is sought for utilizing the excellent sense of smell. The nourishment is found over as well as under the soil; the earth is moved with the snout or digging with the robust big nails. The badger has an omnivorous alimentation including an ample variety of foods: the characteristics of its teeth (with not too much developed canines) and the relative length of the intestine (which, in the badger is longer than that of the mainly carnivorous animals) are elements indicating the omnivorous diet, which, even if varying along with the seasons, is always rich of vegetal substances. Fruits, berries, seeds, fungi, roots, tubers, acorns, beechnuts, grasses and barks can form up to the 70-75% of the daily diet. Earthworms, insects, snails, other invertebrates, small and medium-sized vertebrates do complete the diet.

The badgers mate during the summer; the females in heat move walking round in front of the males. The pairs usually live together having monogamous behaviours. In the badger, the mating does not coincide with the implantation of the fecundated ovules. As a matter of fact, the zygote spends a period of quiescence of 4-5 months after which it gets into the uterine mucosa; the embryonic development lasts 6-8 weeks. Then the gestation, estimated of 7-8 months from the moment of the conception, continues after a long pause. By late winter-early spring (January-April) the female delivers, in a chamber especially prepared with soft litter, 3-5 cubs. 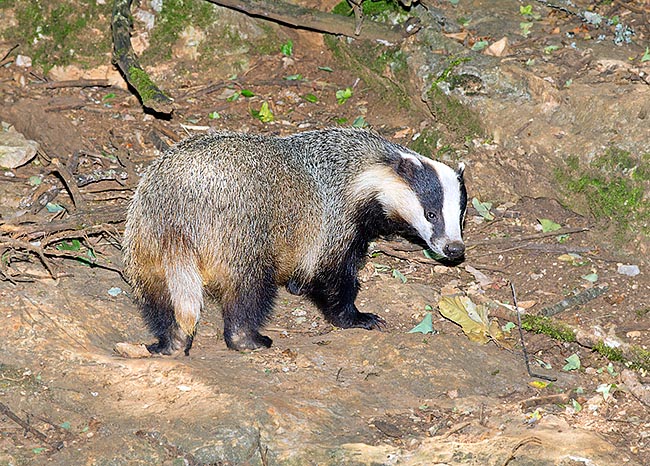 The female has three pairs of udders. The newborns have a whitish mantle (even if the skin can be glimpsed with the pigmentations of the characteristic drawings of the mantle), are about 10-12 cm long and have the eyes closed. They open their eyes after some weeks and are nursed for about three and more months. During the weaning they begin to get out from the den, looking for food, accompanied by the mother.

The juveniles reach more or less the size of the adults and become autonomous in autumn.

Some young remain with the mother also during the winter following the birth (others get away and create own, initially simple, dens already in autumn), but are sent away when the successive delivery is approaching.

The sexual maturity is reached around the second year of life. The lifespan of this species is of about 15 years.

The European badger is presently protected in several countries. In the past, it was hunted for the flesh, deemed tasty, the fat and the fur and for the fact that at times it causes damages (actually, modest and limited) in the cultivated zones. Among the rural populations of Venetia and Piedmont exists a belief after which there are two species of badger: the dog, or doggy, badger and the pork, or porcine, badger.

After this belief, the first one, carnivorous and fast, should not be edible; the second, vegetarian and slow, should have excellent flesh. This legend should have arisen due to the different in size among the meager badgers seen in spring (after the winter fasting) and those, fat, seen in autumn (fat and ready for the winter rest). The hand-reared badgers are sweet and gay creatures expressing strong sociality; attention, however, if are found wild injured badgers (they are often victims of collisions with vehicles), because they are endowed of extraordinary strength and of powerful bites.