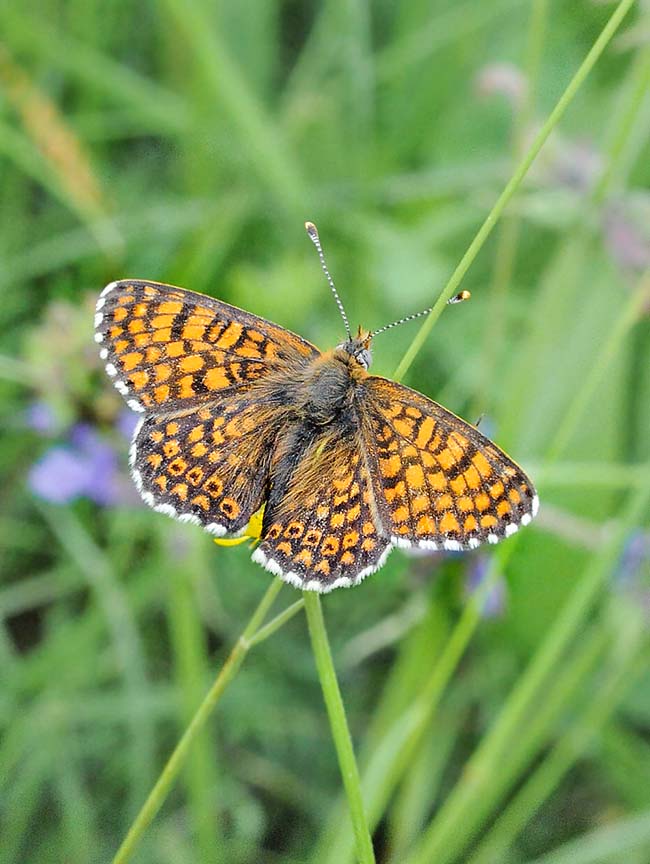 Common in most Europe but also in Asia and North Africa temperate zones, Melitaea cinxia is easy to identify due to its black small dots in the cells of the post-discal belt © Gianfranco Colombo

The Glanville fritillary (Melitaea cinxia Linnaeus, 1758) belongs to the order of the Lepidoptera and to the family of the Nymphalidae.

In this family are usually included more than 6.000 species of butterflies distributed all over the world, therefore it is considered as the most consistent among those grouping the diurnal lepidopterans.

To this butterfly is linked a rather particular and unpleasant remembrance which is often reminded by those who have done of the study of the lepidopterans the aim of their life or of simple and pure passion. In England, this nice butterfly has the name of Glanville Fritillary, in memory to the noblewoman Eleanor Glanville, a British collector who lived between the XVII and the XVII centuries who discovered it during her researches in the Somerset countryside and in the island of Wight, unique Anglo-Saxon piece of land where this butterfly lives.

Unluckily, Lady Glanville paid for her entomological passion with very high pressures inside her family, especially with her second husband, so much to get one of her sons contesting her will upon her death. The heir in fact won the case and the properties were distributed differently. The judge, referring to the mother, sentenced that “no human being in his right mind could have a passion such to take him running after the butterflies in the fields with a butterfly net in his hands”.

The etymology of the scientific name of the Melitaea cinxia is, like all names given by the first naturalists, subject to various interpretations.

In particular, the genus Melitaea has had several explanations. Fabricius, 1807, has as usual gambled on the name, by mediating various interpretations given by other contemporary naturalists. Eventually, he proposed a solution indicating the origin from the Greek “meli” = honey, evidencing in this way the strong attraction this butterfly has for the very sweet nectars. Sodoffsky, 1837, derived it with a slight distortion, from “Melinaea”, referring to one of the numerous nicknames given to Aphrodite (Venus). Pickard and others derived it from Melitaea, the name of a city of Thessaly. Mcleod, from the Greek “melitaios” = coming from Malta. Finally, Mélitea was also one of the Nereids, daughter of Nereus and Doris. Thus, all interpretations given during the time by the various naturalists are quite acceptable and supported by correct linguistic evaluations.

For what concerns the term “cinxia”, the Latin derivation from “cinctus” = encircled, surrounded, is simple. Furthermore, Cinxia was the name given to the god Janus when he took over the duties and powers of Lucina, the childbirth goddess, in the moment when she loosened her girdles of bride. An elegant way for indicating that she conceded herself to the groom. 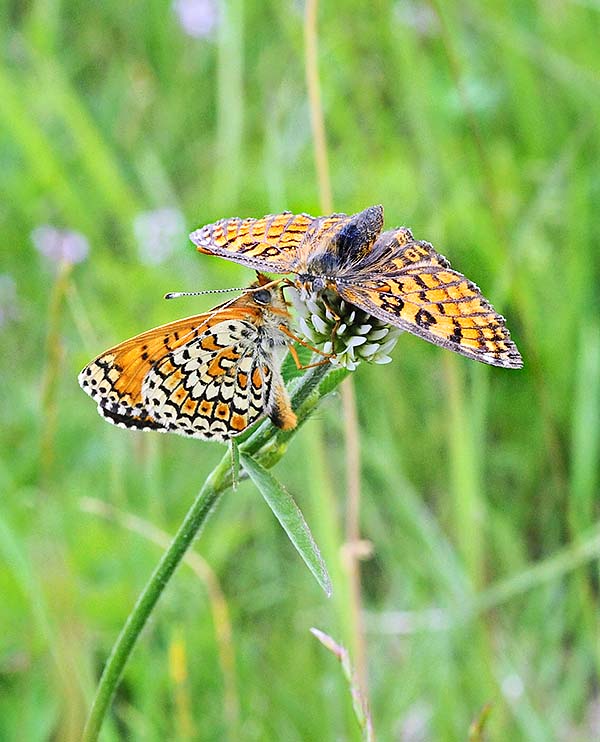 Dotting present also on the back of the wing, as evident in this love approach © Gianfranco Colombo

The vulgar European names are quite different and, moreover, not all countries have defined a specific name for this butterfly, seen the remarkable quantity of species of fritillaries present on their territory and the difficulty in distinguishing them. In English, Glanville Fritillary; in French, Damier de plantain; in German, Wegerich-Scheckenfalter; in Dutch, Veldparelmoervlinder; and in Catalan, Damer puntejat.

The Glanville fritillary is present in almost all European territory but Great Britain (present only in the Channel Islands), the Scandinavian Peninsula and southern Spain. It is also found in all Asia along the temperate belt and in North Africa where some subspecies are found.

Where present, it is a very common butterfly, even if subject to strong reduction during the last decades and in sole locations totally disappeared.

It lives well sunny meadows where is a great number of flowers and of herbaceous essences.

It is present from the sea level up to the 2.000 metres of altitude on the Alps. The ideal habitat stands between the 300 and 600 m. It does not love the woody or densely wooded locations.

The Melitaea cinxia is a medium sized butterfly, easy to mistake with all congener Fritillaries present in the same area. As a matter of fact, it overlaps many other species and can be easily distinguished only if observed closely.

Perhaps, it is one of the few fritillaries distinguishable with certainty by observing the only drawings carried on the upper face of the wings, almost impossible operation in all other congeners.

Its wingspan is of about 5 cm with a slight dimorphism for the female who is slightly bigger and with more marked drawings. The surface of the wings is of a uniform orange yellowish colour, marked by a well defined reticle with black lines forming along the coast, on three parallel belts, squared cells.

Peculiar characteristic of this butterfly is the presence inside the post-discal belt, of small black dots that starting from this belt then disappear when close to the back margin of the fore wing. This dotting is easily detectable also on the back, thus facilitating even more the correct determination. 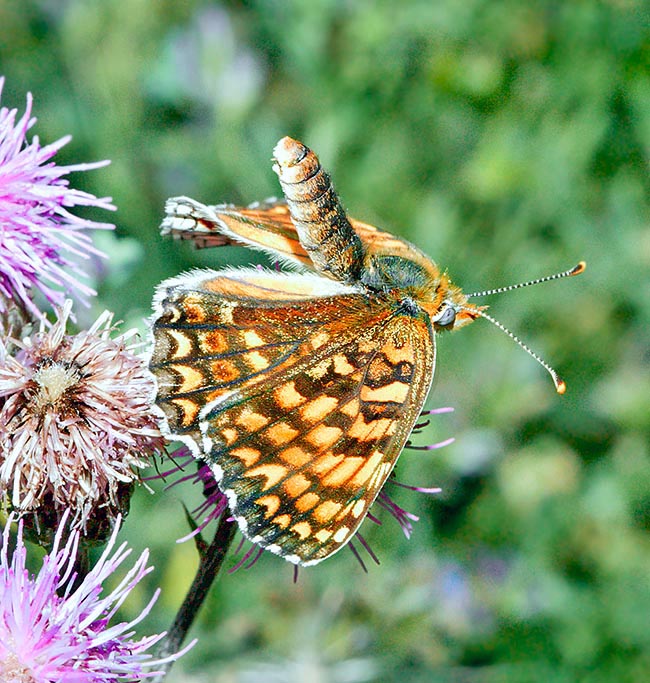 Only the Melitaea arduinna has this characteristic but the geographic overlapping of these two butterflies takes place only in some areas of South-East Europe and of Asia and furthermore the different dimensions and the drawing of the back of the hind wing, further facilitate the distinction.

Like many Fritillaries, it flies from May to late September. The male is used to fly over the flowered meadows looking for the females who willingly keep motionless in the grass but in the meantime often loves to stop on the flowers for sucking their nectar.

It is a butterfly easy to be seen due to the dimensions as well as due the continuous twirling done on the meadows where is present. It’s a continuously moving butterfly but easy to approach and observe when feeding.

The Melitaea cinxia is monovoltine in the coldest areas, whilst performs two generations in the Mediterranean regions and in the warmest areas of their area.

It lays the eggs directly on the host plant in huge quantity, reaching even 200 eggs and the caterpillars live in community for most of their larval life.

They take shelter and live together in a typical nest of silk where they hibernate during the bad season or also in very dry summer periods. When scared, all the larvae raise the head at the same time in sign of defence towards the potential foe. The following year, by their awakening in the warm season, they disperse for reaching the final stage and pupate in separate locations.

The about 3 cm long caterpillar is blackish, fraught with small hairy protuberances and has vivid orange head. The pupa has an incubation of about three weeks, a period corresponding in broad terms to the same life of this butterfly. Host plants are the Plantago lanceolata and Veronica sp.