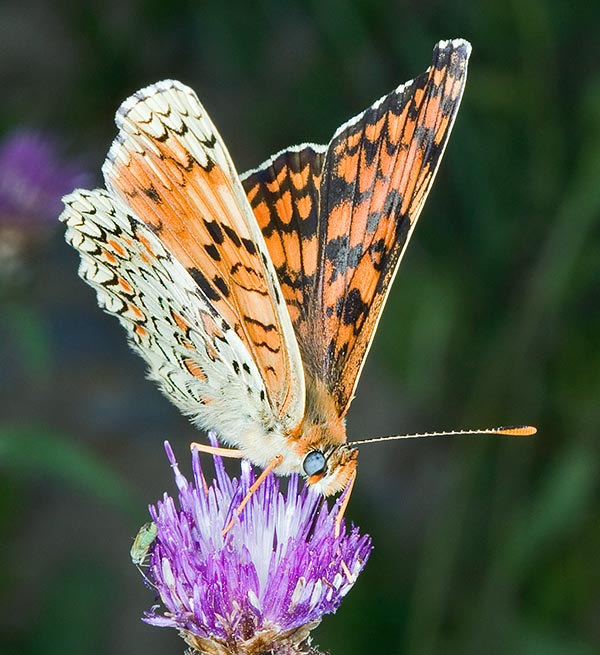 The Knapweed fritillary (Melitaea phoebe Denis & Schiffermuller, 1775), belongs to the order of the Lepidoptera and to the family of the Nymphalidae.

As already said, in this family are usually included more than 6.000 species of butterflies scattered all over the world, and consequently it is considered as being the most consistent amongst those grouping the diurnal lepidopterans.

This is one of the most common fritillaries in the southern part of Europe and stands also amongst the most variable ones as per size and drawing in this group of butterflies.

Various are the interpretations of the terms “phoebe”: Phoebe comes from the Greek “phoibos” = brilliant, luminous, but may be referred also to Phoebos, one of the names utilized for identifying the god Apollo or Phoebe, a Titanid daughter of Gaia and Uranus, whose name was used for the goddess Artemis.

Furthermore, in the Bible there is a reference to Phoebe, a deacon of the church in Cenchreae.

Nowadays, Phoebe has become also a female first name quite common in the Anglo-Saxon world, used as identifier of beauty and luminosity.

The name of this butterfly is strictly linked to the congener Melitaea didyma due to the extreme resemblance among these two butterflies: “didyma” from the Greek “didumos” = twin, rightly of the phoebe. 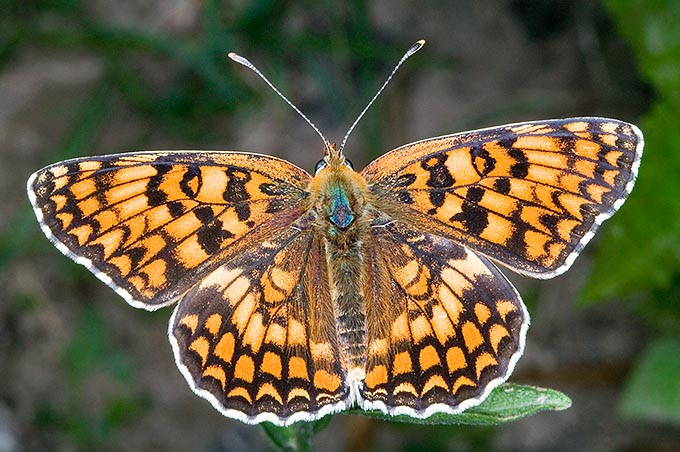 The current European names are rather different and mainly identify some characteristics of this butterfly.

The knapweed fritillary is amply present in the southern Europe part and fairly diffused in the continental part of the same, with the exception of the more northern areas (Great Britain, Scandinavia, Holland and Belgium).

It is present in North Africa and in Asia in a belt going from the Middle East and Turkey up to Mongolia and Manchuria. Its range overlaps, almost perfectly, that of its twin Melitaea didyma.

It lives in all sunny meadows and in grassy and flowery clearings up to about 2000 m above the sea level. 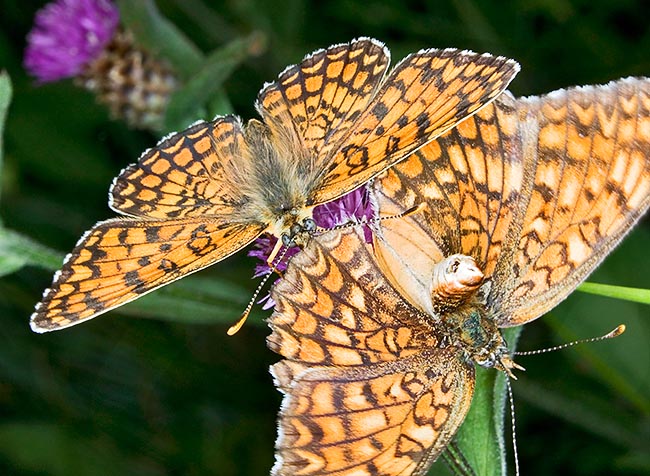 It reaches the 5 cm of wingspan. Here a mating approach © Giuseppe Mazza

The Melitaea phoebe is a medium sized butterfly, easy to mistake with all its congener fritillaries present in the same area.

It has a wingspan of 5 cm about with a slight sexual dimorphism for the female which proves slightly bigger, with a more massive body and brighter colour.

The upper face of the wings is orange/yellowish crossed by a series of lines and black spots with a reticulated pattern, with very variable drawings.

The drawing of the wings s quite similar to that of the Melitaea cinxia but lacks of the typical black small spots inside the cells of the second discal belt (please see Melitaea cinxia).

The female has a paler colour than the male with a greater contrast between the pale coloured and dark coloured zones.

Conversely, typical are the characteristics of the drawings on the lower page, especially on the hind wings where is easily identified the presence of a post-discal orange belt usually lacking of spotting or dots (Please see Melitaea cinxia). 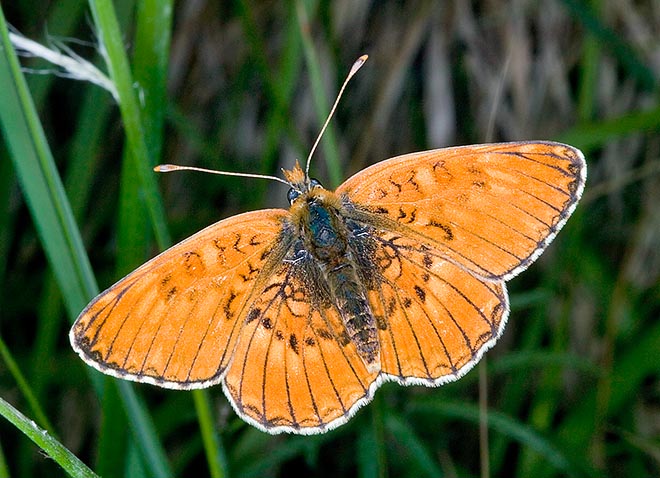 An aberrant form, maybe due to climate, which has almost lost the drawing © Giuseppe Mazza

It flies from April to late September on grassy and flowered prairies.

Also Melitaea phoebe is an easy to be seen butterfly as it spends much time flying, going from flower to flower and also easy to be approached and observed when feeding.

It lays a high number of eggs and therefore each generation sees a remarkable quantity of specimens taking flight.

The eggs are normally spawned on the host plants but at times also on closer essences and have a hatching period of two/three weeks.

Upon their birth, the caterpillars keep in community in a small silky nest which they abandon after about 15 days for then dispersing and complete the growth. 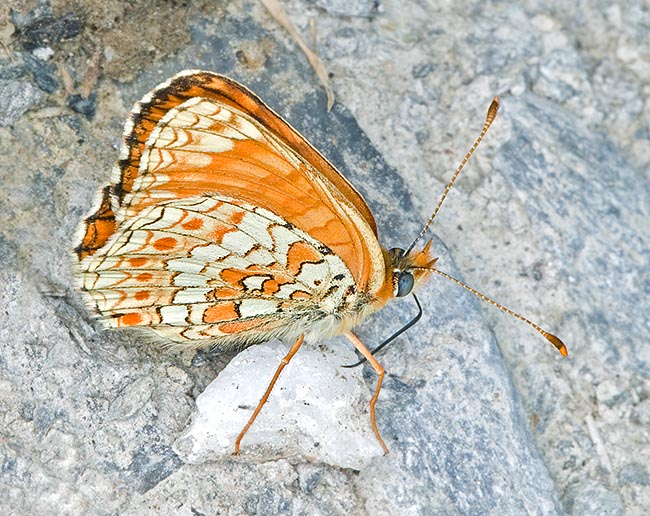 Also the wings lower page is quite different © Giuseppe Mazza

The last generation spends the winter in the stage of small larva hidden in its own nest or even isolated.

Besides the usual predation of the larvae done by small animals and insects, it has been verified that there is a very low survival of the small caterpillars during the rather cool or strongly humid, winters.

The adult caterpillar is about 2,5 cm long, is black with the body crossed by alternate and parallel white and orange rows surmounted by protuberances on which are placed small silky rosettes of black hairs. The pupa has an incubation period of about 20 days.

Among the host plants are Plantago, Cirsium, Veronica, Centaurea and Linaria.