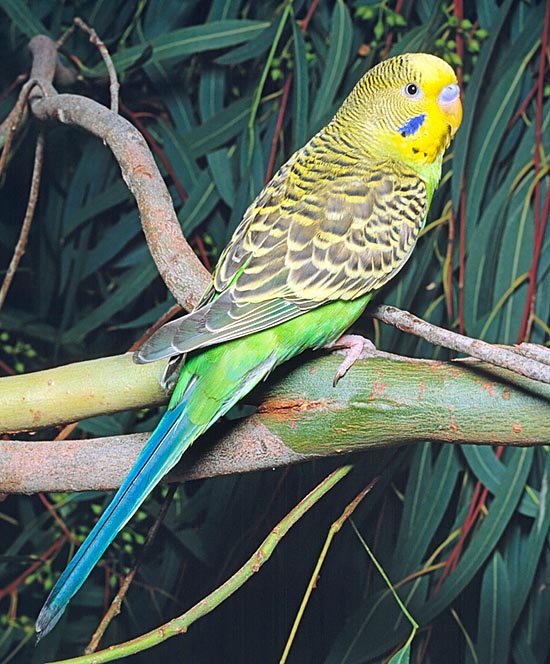 At home in Australia, Melopsittacus undulatus has reached Europe in 1840 © Giuseppe Mazza

Known since the year 1789 and introduced in Europe for the first time by J. Gould in the 1840, the Budgerigar (Melopsittacus undulatus Shaw, 1805) belongs to the order of the Psittaciformes and to the family Psittacidae, subfamily Psittacinae.

The name of the genus “melopsittacus” comes from the Greek “melos” = song and “psittakos” = parrot, it is, in short, a “singing parrot”.

The name of the species “undulatus” from the Latin “undosus” = wavy refers to the drawings of the livery.

It is present in the entire Australian continent, from the steppe to the tropical zones, with exclusion of the coastal areas and of the Cape York Peninsula.

As already mentioned, it lives and moves in flocks all over the Australian continent, but its country is the South where we note very crowded flocks, excepting the coastal zones and the Australian satellite islands.

Despite having suffered massive seizures in the past, it is still now deemed as abundant, with its five and more million of specimens.

It lives in a free state, in numerous flying flocks, usually in the eucalyptus forests for which it has a particular preference.

It moves during the coolest day hours looking for food and for puddles, covering hundreds of kilometres, till when it finds a place suitable for living due to the presence of seeds and other.

It likes the open meadows, the savannahs with mulgas (Acacia aneura) and eucalyptus (Eucalyptus gracilis), the areas cultivated with groundnuts and the expanses of Triodia wiseana a grass rich of silica. The flocks of these parrots never station far away from the water streams and from the banks of the rivers. 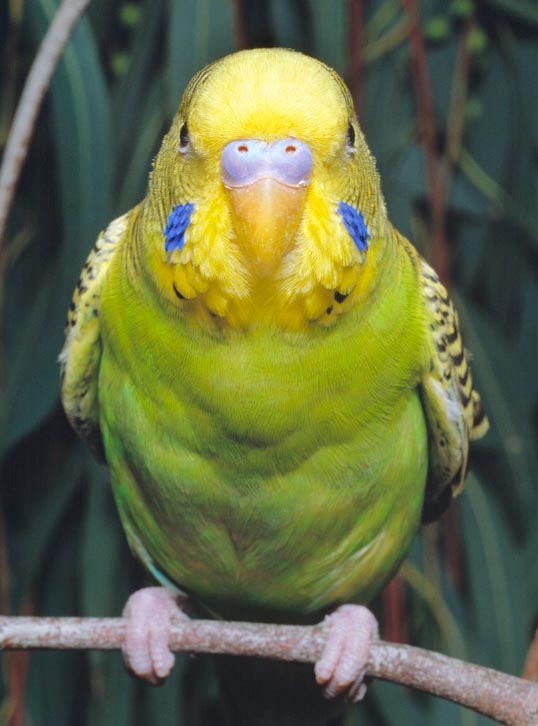 On the cheeks a blue trait, over the beak the cere reveals its sex © Giuseppe Mazza

Being nomads par excellence, the colonies change on a yearly basis their stationing zones, zones they find without a fixed route. During the coldest months the move northwards, whilst they come back south in the warm months.

The “budgie” has the front, the fore part of the head, the lower part of the cheeks and the throat of sulphur yellow colour; towards the middle of each cheek it shows a blue trait and each side of the neck, upward, has two or three round spots, also blue.

Most of the feathers of the wings are undulated in black and yellow, as well the nape and the back. All the upper part of the body, the chest and the belly, the rump and the upper feathers of it has a nice grass green colour. The feathers of the tail are green with yellow stripes in the middle, but the two central, long and pointed, which are dark blue. The iris is yellowish white, the beak horn colour and the legs are of pale blue colour.

They have a size of 18-20 cm, 11 cm of which form the tail. With outstretched wings, it measures about 30 cm, so much to allow an extremely fast flight.

They live harmoniously and reproduce in community even if they are monogamous; it is not rare however that one unique male copulates with different females, but of only one takes care during the incubation and the breeding of the chicks. Generally, they are suitable for mating by the sixth or seventh month of life. The greater is the number of the colony, the better is the outcome of their reproduction. The cavities and the crevices of the eucalypti and of the euphorbia host their nest and they remain there until the young fly away. 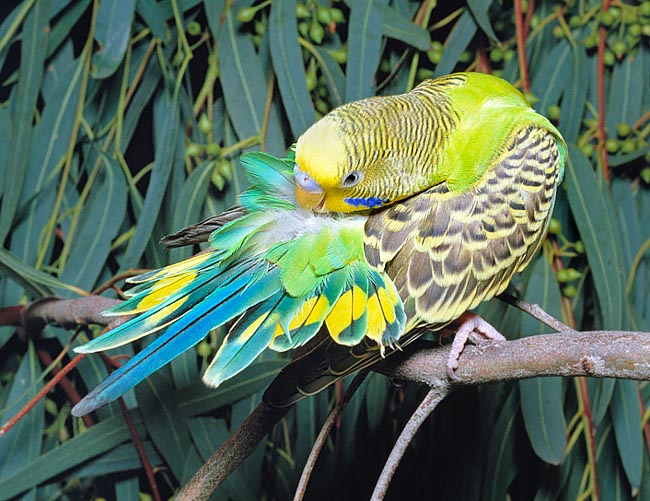 But when the sun does not heat up sufficiently or a serious drought happens, they migrate towards more rainy and humid zones. In the origin country, the deliveries virtually take place all over the year, butt they prefer the period between August and January in the southern regions and June-September in the north. The female spawns four to ten eggs, seven as an average.  The incubation varies from 16 to 18 days, depending on the local temperature, and might last even 21 days.

The chicks come to life bare and only after a few days they cover of a yellow down, when twelve they open the eyes and, at last, after one month they leave the nest, but are still nourished by both parents for two more weeks, with seeds of spinifex (Triodia sp.), which, by means of its flowers, performs a detoxifying and antiparasitic action, and with seeds of Mitchell grass (Astrebla pectinata) and of millet. Meanwhile, the female gets ready for a subsequent nidification.