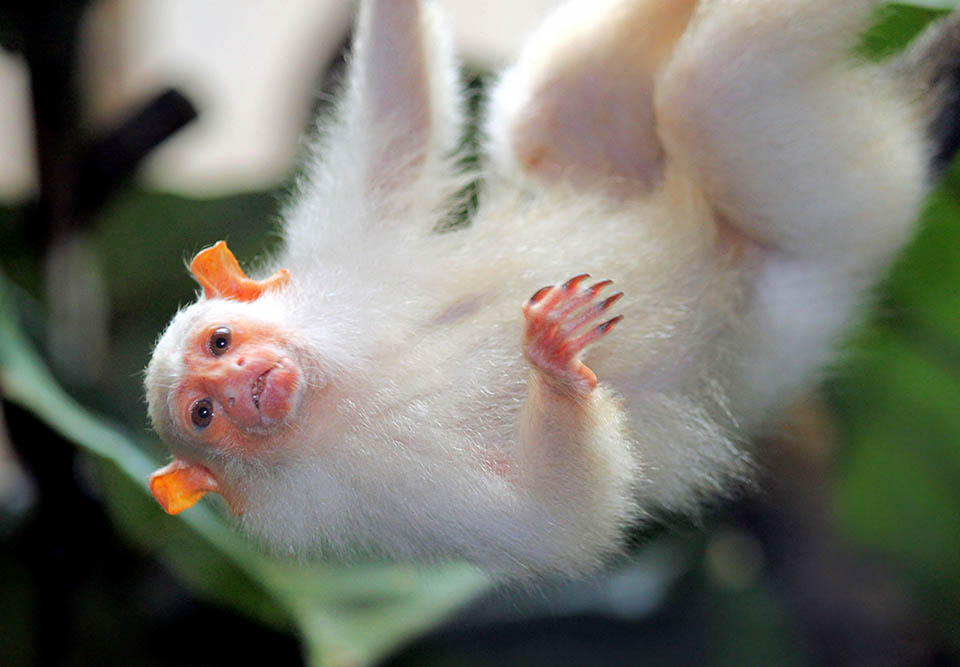 Long at most 22 cm plus about 29 of tail, the Silvery marmoset (Mico argentatus) is one of the smallest New World monkeys © Gary Burke

Mico argentatus (Linnaeus 1766), commonly known as Silvery marmoset, is a small primate of the New World, belonging to the family of the Callitrichidae. The genus Mico, originates from the name used in Amazonia to indicate small monkeys, whilst the specific epithet argentatus, silvery in Latin, refers to the colour of its mantle.

The Silvery marmoset is mainly diffused in the south-eastern area of the Amazon River in Brazil, relatively isolated from the other marmosets, excepting the delta of the river, are shared with the Common marmoset (Callithrix jacchus). 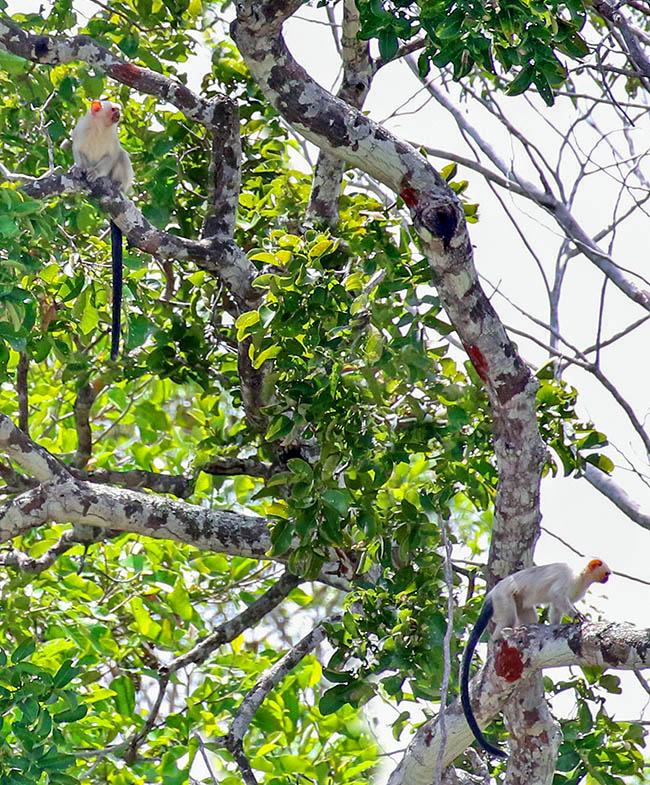 Between the Xingu and the Tocantins rivers, it may get in touch with Saguinus niger, the Black tamarin, that also occupies the mountain forests of the Guiana Shield.

The habitat of the Silvery marmoset is formed by secondary forests and by plains primary ones.

It is an arboricolous primate mainly linked to the rubber trees growing in the pluvial Amazonian Forest.

Besides the primary and secondary forests, the Silvery marmoset is found also in a limited area of the mountain forests present in the zone south to the “Brazilian Shield” (Brazilian tectonically stable area).

At the mouth of the river Tapajòs, the Silvery marmoset is present in small forest areas amidst the sandy Amazonic savannah.

Groups studied in these zones did occupy territories that included forest areas in territories having clayey soil, marginal/apical areas and forests with white sandy soil (campinarana).

These forests are preferred because they present a high density of rubber trees, mostly Tapirira guianensis, that furnishes fruits too.

The length of the head-body goes from 20 to 22 cm, whilst the tail is averagely 29 cm long. The weight hardly in nature reaches 450 g, with an average of about 300 g in both sexes.

Peculiar morphological characteristic is the narrowing of the apical part of the jaw, definitely sharp. It has small and thin canines, evolutionary adaptation to the habitat occupied and to their specialized diet.

The mantle, in accordance with the name, is pale silvery grey in the upper part of the body and pale yellow/cream, with a quite evident demarcation of the two colourations. 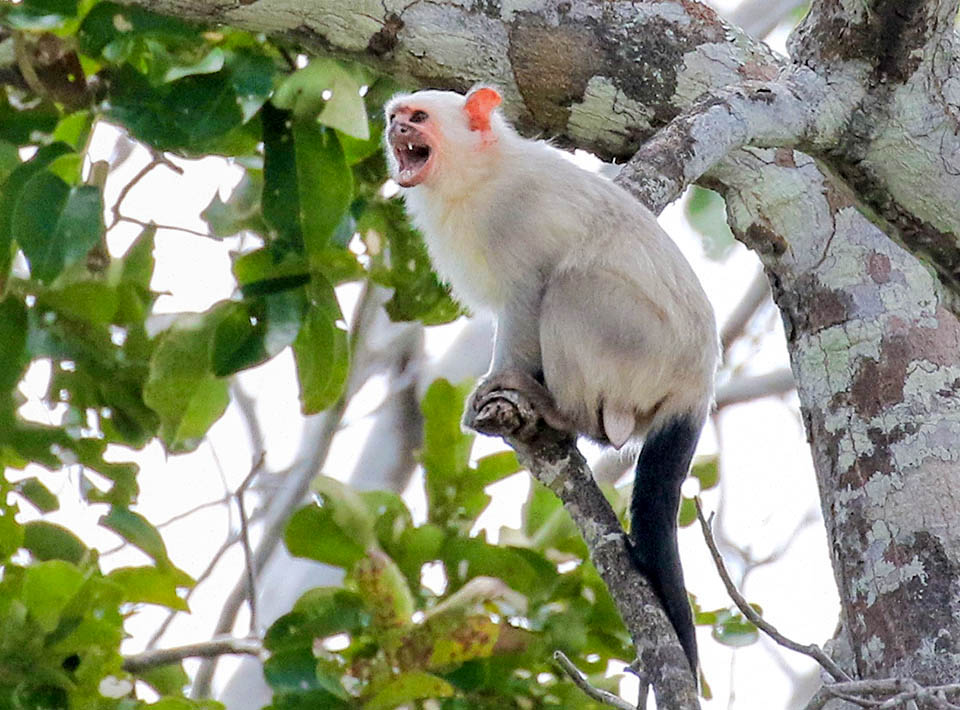 Lives in small social groups of 4-11 members. Vocal communication serves to define the territory, to keep in touch in the thick of branches and signal predators’ arrival © Cat Rayner

The head is clear white, hands and feet are slightly darker, and the tail, wholly black is in clear contrast with the rest. A way perhaps, to look smaller and to confuse predators’ ideas, camouflaged as they are in the chiaroscuro of the forest. The face and the ears are glabrous and pink, often covered by small red dots. The external part of the genitals is red.

Mico argentatus is an almost totally arboreal diurnal species. The nails are long and curved to cling to the bark of the trees and to support the weight of the body. 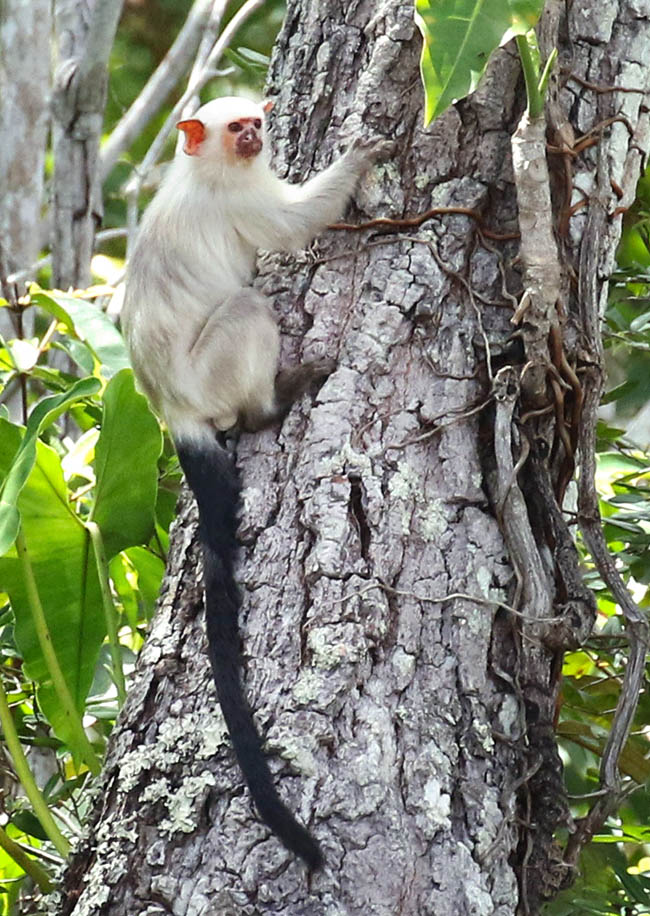 Nails are long and curved, to cling to the bark of the trees. The black tail breaks the outline of the body © Cat Rayner

The typical jaw, with canines as small as the incisors, allows it to scrape the bark of the trees and to make holes to reach the sappy exudates and the gum.

However, its diet may vary depending on the food availability in the zone, and can be occasionally integrated with fruits, flowers, leaves, insects, spiders, and small vertebrates such as lizards and anurans.

A study carried out on two groups of Silvery marmosets that occupied a 25 hectares forest in an area of savannah with sandy soil, it has revealed that they ate fruits from 35 different plants, gum from 8 species and nectar from two ones.

The gum of Tapirina guianensis and the nectar of Symphonia globulifera have a particular importance when fruits and insects are lacking during the warmest months in the dry season.

During this period, the consumption of fruits decreases in favour of that of the gum; moreover, the time devoted to research and to feed increases.

The typical day of the Silvery marmoset is characterized by two main activities during the first hours of the day: to move and to nourish (of plant resources first, then of animal prey).

During the central hours of the day it rests, to then resume feeding more actively. Finally, it reaches the site for the nocturnal rest, an environment with tall trees characterized by tangles of lianas and dense foliage.

The Silvery marmoset lives in social groups of 4-11 individuals. To these belong 1-2 adult females, 1-3 adult males, several subadults, youths and kids. Inside the family group, the only reproductive couple is the dominant one. As a matter of fact, the females release pheromones that can inhibit the ovulation of the other females.

The childs of the Silvery marmoset are mainly born in February, at the beginning of the rain season, and in July, by the end of the rain time.

The period of gestation amounts to about 5 months and usually the female generates a couple of twins, even if single or triplet deliveries are not rare. 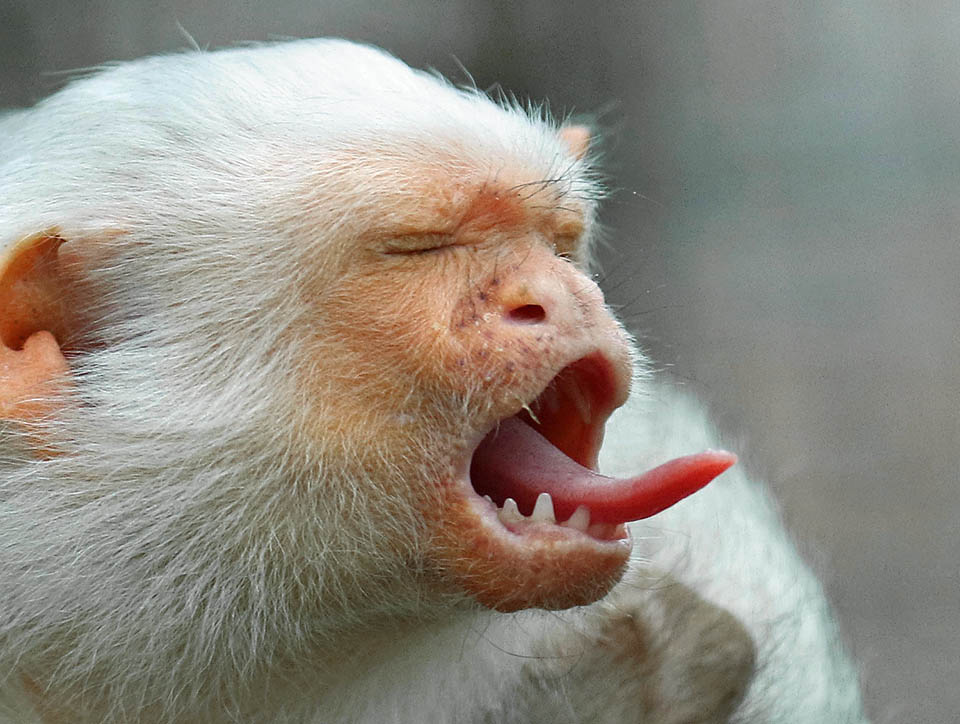 The canines, well visible in this yawn, are small, like the incisors, to scrape the bark of the trees and create holes through which to reach with the long tongue the sappy exudates and gum. Sometimes Silvery marmoset eats also fruits, flowers, leaves, insects, spiders and small vertebrates it finds in the branches, like lizards and anurans © Jon Isaacs

After delivery, the subsequent ovulation takes place fast and may occur during the following ten-twenty days. The care of the newborns is entrusted to all members of the group, that is brothers and cousins, who provide to control, protect, and play with the kids. The mother nourishes them for about 6 months, until weaning. The adult age occurs around the second year of age.

The vocal communication is utilized by the family group to define their own territory and to keep in touch with each other. The movement towards and out from the night resting zone takes place with slow motions and in spaces where the vegetation is thicker, this not to attract the predators’, usually snakes and raptors, attention. 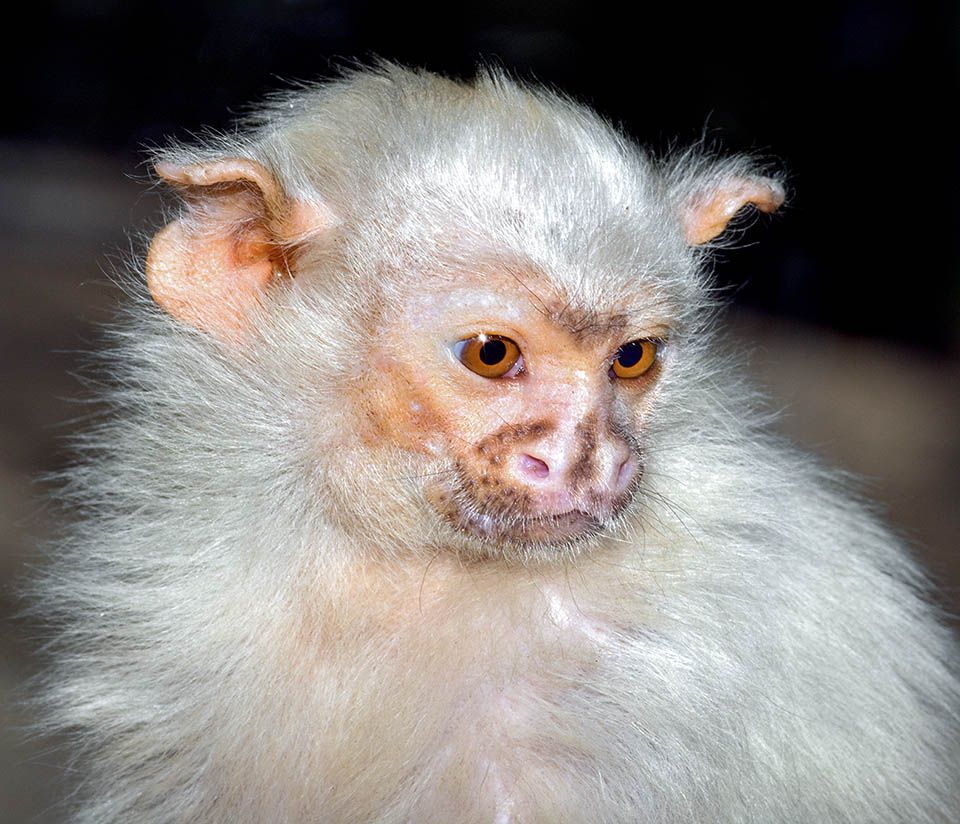 In the group, the only reproductive pair is the dominant one. Gestation lasts about 5 months and usually the female generates two twins © Giuseppe Mazza

The sighting of a danger is promptly signaled by the individuals emitting alarm calls, a series of “cracks” of the lips, produced with the animal lowering its eyebrows.

Despite the constant loss of habitat due to the deforestation of the Brazilian pluvial forests, after the Red List of the IUCN (International Union for Conservation of Nature), the conservative status of this species is of “Least Concern”.

Unluckily, the loss of habitat and the decrease in number of the members of the populations, have carried into several groups phenomena of genetic drifting, thus favouring the inbreeding. 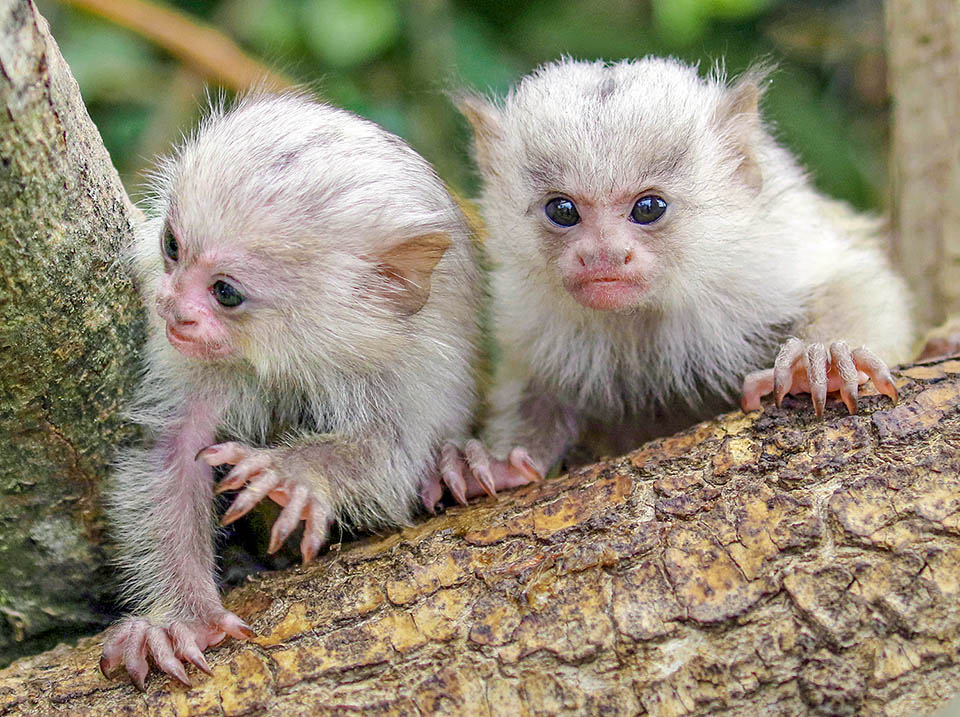 Pampered by all members of the group. Mother nourishes them for about 6 months, up to weaning. Adult age is around the two years © Jon Isaacs

The lower genetic variability caused by the decrease of the genetic flux between the populations could generate local extinctions of entire groups.

Another important danger to their conservation stands in the legal and illegal trade. In fact, this primate is marketed as a pet and as food at the local level.