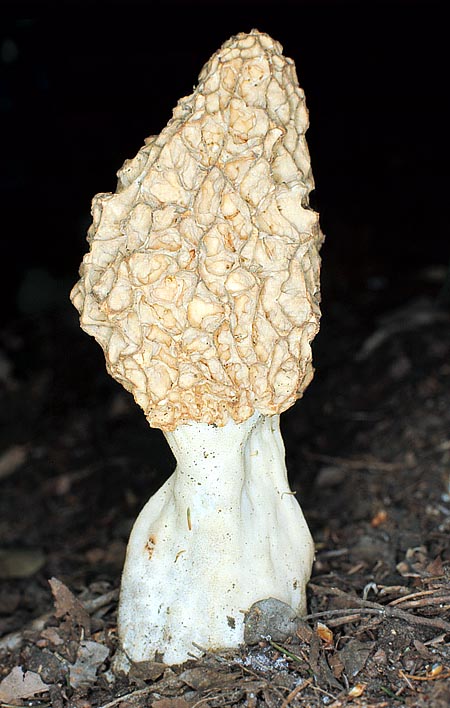 Morchella esculenta is edible only after long cooking © Giuseppe Mazza

The name “esculenta” comes from the Latin “esculentus” which means “edible”.

The Morchella are much sought fungi in spite of being edible only after cooking; consequently also the vulgar names are many: we mention here the most common ones. In Italy, it is known as spugnola, rocchetto; in France as morille blonde, morilel comestible; in Spain as morilla, morel, cagarria; in Germany as Speise-Morchel, Rund-Morchel; in England as common morel, morel, yellow morel, true morel, morel mushroom and sponge morel.

To the genus Morchella are ascribed spring mushrooms, terricolous, saprotrophic, of medium and large size. The carpophores present a honeycomb-like cap that may be conical, globulous or roundish and cylindroid stem, whitish, granulous or furfuraceous, at times compressed or grooved. The cap has the surface formed by irregularly shaped pits, symmetrical as well as asymmetrical; the edge is attached to the stem by means of a vallecula (annular depression separating the base of the cap from the summit of the stem). The flesh has waxy, elastic, fragile consistency. The spores are smooth, ellipsoidal, and yellowish in mass.

Habitat: it grows in the humid and cool zones, in particular in the riparian ones, in presence of elms, ashes or rosaceous plants.

Edibility: edible after long cooking; the raw or little cooked Morchella are toxic.

Remarks. The dimensions of the ascocarp, the shape of the cape, the colour and the arrangement of the apothecia change depending on the varieties; more or less recognised of this species: 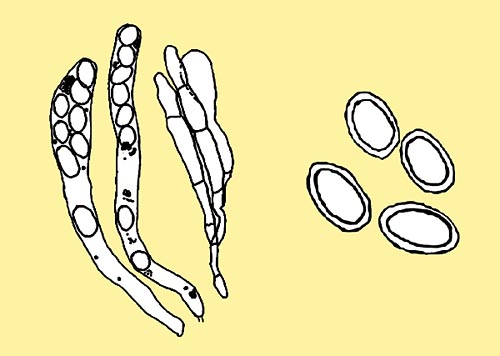 ►Morchella esculenta var. rotunda (Persoon) P. E.M. Fries, of medium or big size, mainly round cap, of pale yellow, yellow-brown or ochraceous colour; large and irregular pits, thin ribs, concolorous but staining rust with the age. More or less cylindrical stem, slightly wider at the base, pruinose, whitish with ochraceous spots at the base.

►Morchella esculenta var. crassipes (Ventenant) Kreisel, much similar to the var. vulgaris, distinguishers from the same due to the bigger size and the base of the stem, decidedly widened and massive.

Similar for the appearance and the pitted cap to Mitrophora semilibera and Verpa bohemica, distinguishes from them for the stockier overall look, the always more or less enlarged at the base stem and especially due to the junction of the cap to the stem, placed at the base of the same. In Mitrophora semilibera, as the name states, the cap attaches to the stem at about the half of its height and in the Verpa bohemica the junction is placed at the apex of the cap.