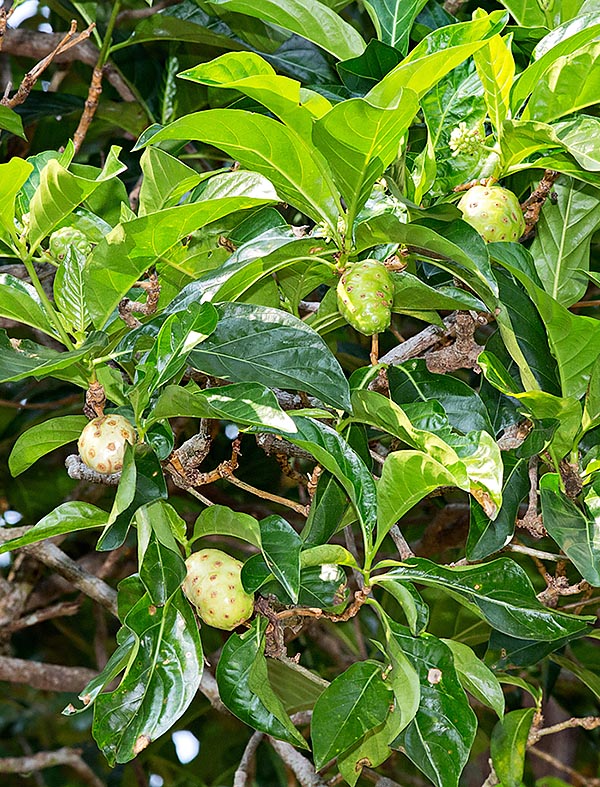 The Morinda citrifolia L. (1753) is a shrub or a 3-8 m tall evergreen tree with a stem of up to 15 cm of diameter and branches with section almost quadrangular. The leaves, on a 0,2-2 cm long petiole, are opposite or single opposite to an inflorescence, oblong-elliptic to ovate with evident venations, 10-30 cm long and 5-15 cm broad, of glossy intense green colour, and semi-circular to bilobed 0,8 x 0,5 cm, persistent, stipules. Inflorescences, on a 1-2 cm long peduncle, opposite to a leaf, oblong to sub-globose, carrying numerous hermaphroditic sessile flowers with hypanthia (involucres shaped like a bowl wrapping the ovary) partially merged, white funnel-shaped corolla with about 1,3 cm long tube and 5 ovate-lanceolate lobes, 0,5-0,6 cm long and curved. The fruit is a fleshy syncarp (a whole of more fruits grown together and merged) from ovoid to sub-globose, 3-12 cm long and of 3-5 cm of diameter, initially green, then whitish or pale yellow when ripe, containing numerous seeds compressed on one side, about 0,8 cm long and 0,5 cm broad, of brown colour, floating thanks to the presence of an inner air chamber, thing which has facilitated its dispersion. It easily reproduces by seed which has duration of germinability of about 6 months or more, in sandy loam maintained humid at the temperature of 26-28 °C, with germination times of 2-6 months or more that can be reduced to less than one month if previously scarified. It can reproduce also by 20-40 cm long woody cutting, in sandy loam, by air layering and root suckers. The species is cultivable in full sun, but also in shaded position, in the tropical and subtropical zones, where temperatures of less than +10 °C are exceptional and very short lasting events, as well as in climates characterized by high and well distributed annual rainfall and also in those markedly seasonal, as it can bear, if well rooted, long periods of drought. It has a high degree of adaptability about the sol, even poor, as it can grow on coralline rocks and basaltic lavas as well as in brackish ponds, having a high tolerance to the saltiness; moreover, its bears the pruning, even if drastic, and the fires, regenerating from the roots. 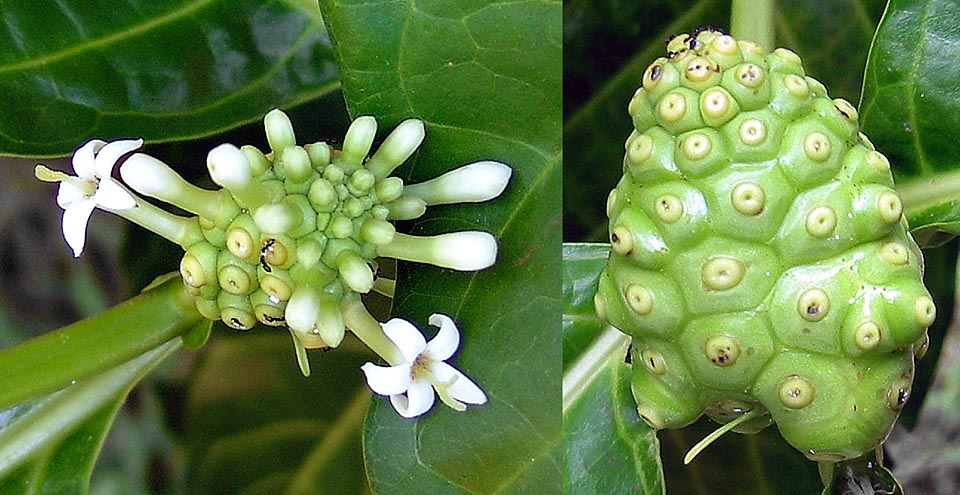 The Morinda citrifolia, commonly and commercially called with the Polynesian name noni, is a widely diffused species in nature and is cultivated in many tropical and subtropical countries for its alleged medicinal virtues, in particular utilized since remote times in the Chinese traditional medicine, by the populations of south-eastern Asia, the Pacific islands and by the Australian natives for a vast number of pathologies. The fruit has a discrete content of vitamin C, a relatively high content of potassium and antioxidants not too different from those contained in other foods. The ripe fruit has a bitter taste and a decidedly unpleasant odour of rancid cheese and despite this is consumed raw or cooked, but especially as juice, as it is or dehydrated, not so much as food, as it has a modest nutritional value, but for the healthy virtues attributed and which now is commercialized in several countries as dietary supplement under various forms and with addition of other ingredients for rendering acceptable its taste. Scientific proofs of the efficacy as anti-inflammatory, antimicrobial, antioxidant, anticarcinogenic and analgesic are still (2012) very scarce and in some case inconsistent, furthermore they have found cases of hepatotoxicity due to its consumption, but the studies about its properties are increasingly numerous. Also to the leaves and the roots are attributed medicinal properties, used under form of decoction as tonic and antipyretic and, naturally, for external local applications for relieving rheumatic pains. Besides for the curative uses, the young leaves in some south-eastern Asian countries are eaten cooked as vegetables or are used for wrapping fishes or other meats for cooking.

In the past, by the Polynesians, the wood was utilized for fabricating paddles and various tools, as fuel and mainly for getting a red dye, whilst a yellow dye was gotten from the roots, pigments that still now are used for colouring fabrics.