The Red mullet (Mullus surmuletus Linnaeus, 1758) belongs to the class of the (Actinopterygii), the ray-finned fishes, to the order of (Perciformes) and to the small family of Mullidae.

The name of the genus, “mullus”, was that given by the Romans to the mullet, fish vey much appreciated since the ancient times, so much that it is reported that Octavius purchased, for the emperor Tiberius, a huge specimen, weighing almost 2 kg, for the crazy amount of 5.000 sestertii.

The origin of the name of the species is rather complicated. The prefix “sur-” should come from “sor-”, which, in the old French means “reddish”, and “muletus” comes from “mullet”, the name given to this fish by the French and the British. In short, concluding, “mullus” = mullet and “surmelutus” = red mullet. Linnaeus wanted to emphasize the European reputation of this unmistakably coloured fish.

It is present all over the Mediterranean, Black Sea included, and, after Gibraltar Strait, along the adjacent Atlantic coasts, from Mauritania to England and to the western part of Norway.

Usually, it lives close to the coast, and rarely dives under the 90 m, and, in spite of its Italian name, “triglia di scoglio” (= reef mullet), it is found more easily on the sand than on the rocks, less off the cost and at shallower depths than the similar Mud mullet (Mullus barbatus), even if we have to add, to be fair, that for some ichthyologists these two mullets should be actually the variants of one single species. 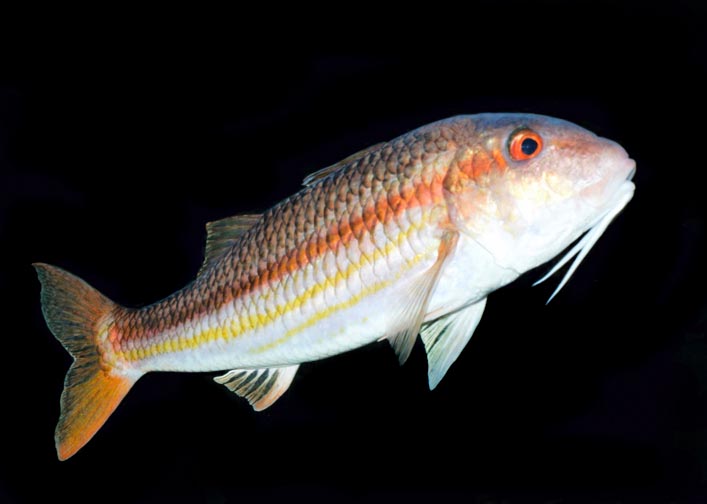 Apart from the above-mentioned legendary specimen, it reaches, as a maximum, the 40 cm of length and 1 kg of weight.

The two long mobile barbels have an important tactile function for exploring the seabed looking for food.

More scarlet than the Mullus barbatus it differs for the red band and mainly for the yellow bands on the sides. But it is good to add that the colouration of the mullets depends from the contraction of the expansion of the chromatophores, the cells, located under the scales, containing the pigment. So, on the pale sandy bottoms, the mud mullet becomes pale yellow with the red of the band turning to dark brown, and in the underwater prairies the whole livery tends to the green.

It should be noted that the typical vermilion colour we find by the fishmonger, appears only when the animal is traumatized, for instance, if it is harpooned by a diver. And this is well known by the fishermen, who, when extracting the mullets from the nets, scratch them with the nails in order that they die with a more appealing colour.

At dusk, the Mullus surmuletus is fully active. It goes around looking for crustaceans, molluscs, worms, and, if it’s the case, of some young echinoderm or some small fish. Unabated, it swallows the small preys together with the sand, which it spits immediately, quickly and very professionally.

It reproduces between April and August. The eggs are fecundated on the seabed and then surface becoming pelagic. The young, semi-transparent, when 5 mm assumes a blue colouration which will last till when they live in the high seas.

When they reach the 30 mm, the get close to the coasts, but still swim on the surface with their pelagic livery they keep longer than the Mullus barbatus, until when they are about 60 mm long, when they go down to the bottom and assume progressively the adults tints.

The vulnerability index of this species is of 39 over 100.