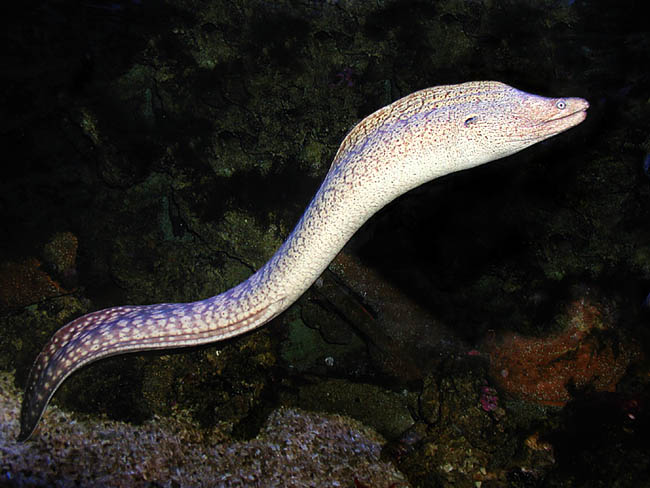 The Moray (Muraena helena Linnaeus, 1758) belongs to the class of Actinopterygii, the ray-finned fishes, to the order of Anguilliformes and to the family of Muraenidae which counts about 200 species and 15 genera present in the temperate and tropical waters of the whole world.

The name of the genus Muraena comes from the Greek “myraina”, reported by Aristotle, and from the Latin “murena”. Finally, it is the name the Greeks and the Romans were giving to this fish. The name of the species helena refers to Helen, the most beautiful woman in the world after Aphrodite, mythic daughter of Zeus and wife of Menelaus, king of Sparta, who, kidnapped by Paris, caused the famous war of Troy. This is a possible reference to the elegant livery and to the fearful teeth which are a veritable war machine.

Is present in the Mediterranean but the Black Sea. After Gibraltar Strait, it goes into the eastern Atlantic: on one side it reaches the Channel, on the other, Senegal, including the Canary, Madeira, Cape Verde and Acores islands. 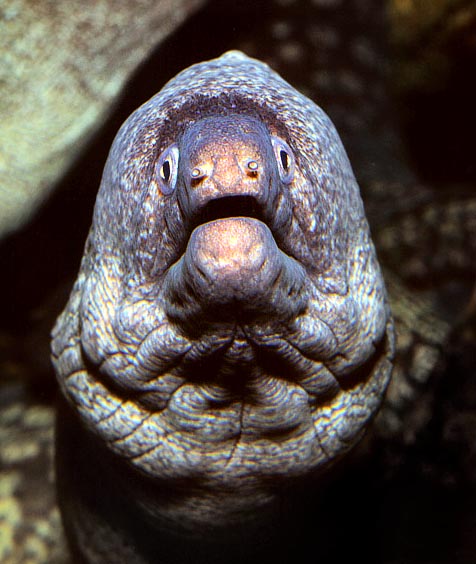 We find it in the rocky crevices, in shallow waters but also on the precipices or n the wrecks, up to 100 m of depth.

The branchial orifices are reduced to two holes at the centre of an oval blackish spot. Four nostrils shaped like a small tube with vibratile cilia for a good circulation of the water ensure an exceptional sense of smell. The anterior ones, longer and bent forward, are placed at the extremity of the snout and the rear ones close to the eyes.

On the contrary, their eyesight is very poor, but it is of no need, seen the nocturnal habits.

The mouth is very ample, with the slightly protruding upper jaw of pyramidal shape. Both jaws have a row of sharp and robust teeth curved backwards.

Among these, there are some more prominent, straight as daggers, and we note, hidden under the skin, some spare teeth, ready to replace those fallen during the bloodiest attacks. Teeth are present also on the vomer, but not on the tongue. 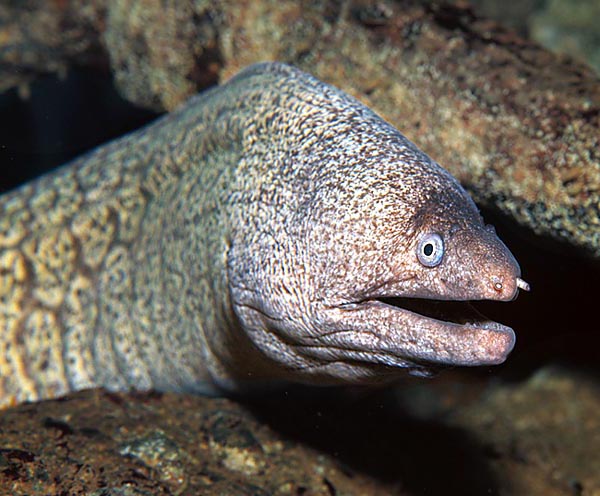 Almost blind, it has a very fine sense of smell and impressive teeth © Giuseppe Mazza

The drawing on the livery is much variable depending on the zone, but after many arguments and renames, by counting the number of the vertebrae (139-143), they got the confirmation that it is matter of only one species.

From the overall colour, dark brown with violet hues, stand out, however, some elegant pale drawings, often yellowish, having a clear mimetic function.

During the day, the moray keeps hiding in its den and hunts only in the darkness.

It is a bad swimmer, and taking advantage from the darkness and its mimetic livery, ambushes to the unfortunate passing by: octopuses, cuttlefishes, squids and fishes which it locates with its sense of smell. Thanks to this, it finds also the crabs and in a heartbeat the carcasses of dead animals which it tears without any effort.

The reproduction takes place between July and September. The eggs are floating and the larvae are leptocephalus, a character of primitivity in the world of the fishes, characterized by forms shaped like a willow leaf, transparent, with the head reduced at the minimum size. They nourish of plankton, drifting for about one year, and then reach the bottom. When they exceed the 12 cm, their livery is already much similar to that of the adults. Contrary to the beliefs, it is not aggressive but is territorial, and when disturbed it does not hesitate to bite. 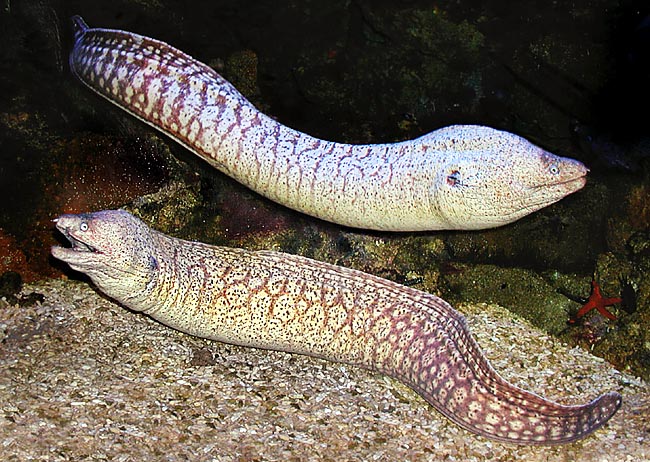 The flesh is excellent, in spite of the spines, but the the species is endangered © Giuseppe Mazza

Pain and tears apart, the wounds may aver dangerous, due to the presence in the saliva of haemolytic and neurotoxic substances and the inevitable infections due to the presence of pathogenic agents in the alimentary residues decomposing between the teeth.

For keeping clean, the Muraena helena often lives almost in symbiosis with the Lysmata seticaudata, a shrimp of the Mediterranean which nourishes of the parasites of the skin, carefully cleaning the branchial orifice and the teeth.

The flesh of the moray is excellent, in spite of the spines and the venomous blood, which disappears while cooking but requires a certain care in cleaning it. While it is true that it seldom ends up in the nets, it does not escape the longlines, the fish traps and the harpoons of the Sundays’ subs, who, after having hit to death the anima are often not able to take it off from the den.

So, day after day, this species, almost disappeared in the Adriatic Sea, has become rare with a truly worrying level of vulnerability: 79 on a scale of 100.