The species is native to Borneo (Sabah) where it lives in the underwood of the pluvial forest at low altitudes.

After some the genus was honoured to the Roman physician and botanist Anotnius Musa (63 BC – 14 AD), after others the name comes from the Arabic “mawzah” = banana; the species is dedicated to the Italian botanist Odoardo Beccari (1843-1920).

The Musa beccarii N.W.Simmonds (1960) is a rhizomatous herbaceous plant, cespitous, up to about 3 m tall, with short and underground stem, and a pseudostem, formed by the foliar bases strictly wrapping one on the other, 1-1,5 m tall. The pseudostem ends in a tuft of leaves, on a grooved petiole 30-60 cm long, ascending, oblong-lanceolate with obtuse apex, up to 1,2 m long and 30-40 cm broad, of intense green colour, waxy, with prominent central vein in the lower page and thin lateral parallel veins. The inflorescence, on a 5-7 cm long peduncle covered by a short and rigid down, is a vertical terminal spike with tubular yellow flowers merged in groups along the floral axis, with each group covered by a scarlet red lanceolate bract with obtuse greenish apex, deciduous; the inflorescence in bud is particularly tapered, about 12 cm long and of 4 cm of diameter. The flowers at the base, in groups of 1-3, are female or hermaphroditic that may self pollinate, 8-10 cm long, followed by the male ones, in groups of 2-5 per bract, about 4 cm long, that fall at the same time as the bract; the male flowers and relevant bracts follow one another for several months. 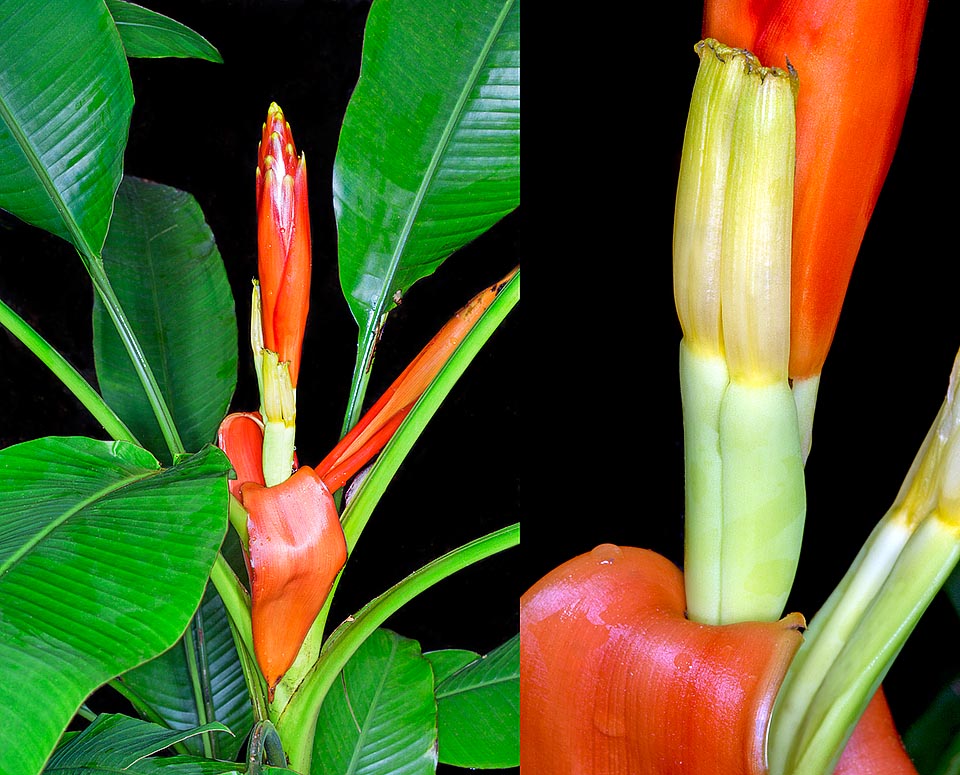 Originating from the rainforests of Borneo, Musa beccarii is a rhizomatous herbaceous species that can reach 1,5 m in height. Long blooming and easy cultivation in pot © Giuseppe Mazza

The fruits, on short peduncle, are almost cylindrical berries, thinned and truncated at the apex, 7-12 cm long and of 2-2,5 cm of diameter, initially of green colour, then pallid yellow when ripe, containing many oblong seeds, around 4 mm long, immersed in white pulp. After the blooming and eventual fructification the pseudostem dies, but from the rhizome new offshoots continue to generate.

It reproduces easily by division of the offshoots provided of roots and by seed, previously kept in lukewarm water for 2 days, in organic draining loam maintained constantly humid at the temperature of 24-26 °C, with germination times from 1 to 3 months.

One of the most ornamental among the Musa of contained size thanks to the luxuriant foliage and the long lasting bright red inflorescences, is moreover one of the few ones able to easily bloom and fructify in pot in indoor environments even if little luminous. Of fast growth, it can be cultivated in parks and gardens, even if limited extension, in the tropical and humid subtropical zones, in preferably shady position, even if it bears the full sun, and sheltered from the wind, in fertile soil, well draining, from slightly acidic to neutral, maintained constantly humid. Elsewhere, it can be cultivated in pot to be sheltered during the coldest months in a protected place with lowest temperatures preferably over the 16 °C, lower temperatures stop its growth. Abundant waterings from spring to autumn, slightly more spaced in winter, but without ever allowing the substratum to dry up completely, and regular fertilizations. The cut inflorescences are utilized in the floral arrangements.