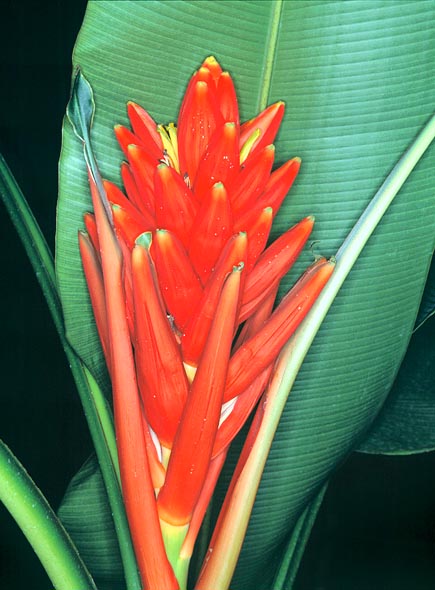 The species is native to the humid forests of southern China (Guangdong, Guangxi and Yunnan) and of Viet Nam, where it is almost extinct.

After some, the genus was honoured to the Roman physician and botanist Antonius Musa (63 BC-14 AD), after others, the name comes from the Arabic “mawzah” = banana; the Latin name of the species, “coccinea” = scarlet, refers to the colour of the inflorescence.

The Musa coccinea Andrews (1799) is a rhizomatous, caespitose, monocotyledonous herbaceous plant, with a waxy green pseudostem, formed by the foliar bases strictly wrapping one on the other, 1-2 m tall and 5 cm of diameter.

The pseudostem ends in a tuft of leaves, on a 30-50 cm long petiole, oblong, of pale green colour, 1,8-1,2 m long and 15-30 cm broad, with central prominent nervation in the lower page, and thin parallel lateral veins.

The inflorescence is an erect terminal spike, on a short, about 4 cm, peduncle, with tubular, 3-4 cm long, flowers, of orange yellow colour united in groups along the floral axis, with each group covered by a scarlet bract with yellow or green apex, the first being about 15 cm long, the others, about 8 cm; the bracts remain unchanged for many days after the withering of the flowers.

The flowers are unisexual, the female ones at the base placed in groups of 1-3 on one only row, followed by the male ones, two per bract, separated by a sterile zone. Due to the particular disposition of the flowers which inhibits the pollination between flowers of the same inflorescence, thus favouring the crossed one, more individuals flowering at the same time are necessary for the fertilization and the complete development of the fruits.

These ones, not edible, are fusiform, 10-12 cm long, berries of orange yellow colour when ripe, containing several black seeds, almost cylindrical and about 6 mm long. After flowering, the pseudostem dies, but from the rhizome new suckers continue to produce. It easily reproduces by division, by suckers equipped with roots and by seed, dipped for 2-3 days in water before being planted in a sandy substratum, kept humid, at the temperature of 20-24 °C; the seeds may take some months for germinating.

Often known in cultivation under the wrong name of Musa uronoscopus, it has immediately drawn the interest for the showy and lasting inflorescences and the reduced dimensions which easy its cultivation also in small gardens, besides rendering it suitable for the cultivation in pot.

It needs a humid warm climate, temperatures around the 0 °C cause damage to the leaves, till the loss of the aerial part, but at level of rhizome it may resist to some degrees under the 0 °C vegetating again in spring, in such case, however, it does not bloom, being necessary about 10 months of averagely high temperatures for producing flowers starting from the rhizome.

Therefore, it may be cultivated in full ground, in full sun as well as in light shade, in the zones where the temperatures around the zero are rare events and, if so, short-lasting, elsewhere it can be kept in pot in order to shelter it in winter in a luminous location with temperatures over the 14 °C.

It requires an acidic or neutral soil, excellent drainage and much water during the vegetative time, but no stagnations, as it may rather quickly decay. The cut inflorescence is often utilized in the compositions, being long-lasting, about one month.