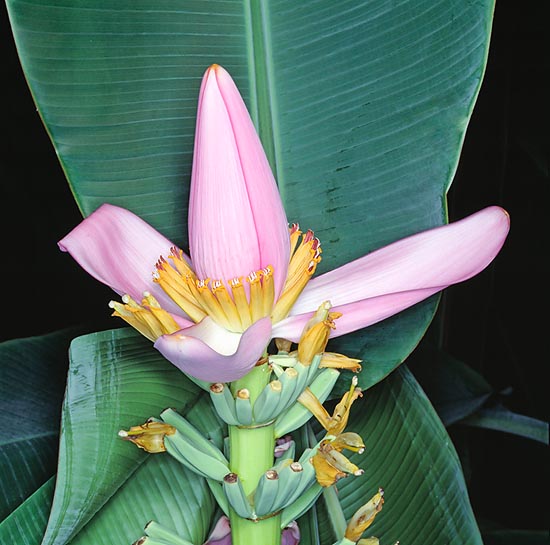 This plant is native to the humid forests of Assam (India), Bangladesh and Myanmar, where it is practically extinct.

After some, the genus was honoured to the Roman physician and botanist Antonius Musa (63 BC – 14 AD), after others, the name comes from the Arabic “mawzah” = banana; the name of the species is the Latin term “ornate” = elegant, beautiful, with obvious reference.

The Musa ornata Roxb. (1824) is a monocotyledonous herbaceous plant, rhizomatous, caespitose, with a pseudo-stem formed by the foliar bases closely wrapping each other, about 1,2 m tall and with a diameter of 10-12 cm. The pseudo-stem end in a tuft of 5-7 oblong leaves, 1,5-2 m long and 35 cm broad, of a blue-green colour with prominent central nervation in the lower page, slightly pink and thin parallel lateral nervations; the specimens in the wild may reach greater dimensions.

The inflorescence is an erect terminal spike, on a robust peduncle, with yellow tubular flowers united in groups along the floral axis, with each group covered by a thick, lilac pink and deciduous, bract. The flowers are unisexual, the female ones stand at the base, placed in 3-5 groups with 3-6 flowers each on only one row, followed by the male ones, 3-5 per bract on one row only, separated by a sterile zone. The fruits, not edible, are fusiform berries, 6-8 cm long, of greenish yellow colour when ripe; containing several irregularly shaped black seeds, 6 x 4 mm, dipped in a thin layer of cream-white pulp.

Due to the particular disposition of the flower which hinders the pollination between flowers of the same inflorescence, thus favouring the crossed one, more specimens in flower are necessary, at the same time, for the fecundation and the complete development of the fruits. After the blooming, the pseudo-stem dies, but new suckers will continue to generate from the rhizome.

It easily reproduces by suckers provided of roots, by division and by seed, which is to be previously scarified, in order to damage the hard and waterproof surface, or dipped for 2-3 days in water before planting the same in a sandy substratum, kept humid, at the temperature of 22-26 °C and in luminous position; the seeds may need some months for germinating.

It is one of the most ornamental and diffused banana plants, together with its numerous hybrids and varieties, in particular due to its adapting to the cultivation in pot and in apartment, where it can also bloom, reaching, of course, more contained dimensions. It may be cultivated in the tropical, subtropical zones as well as in the warm temperate ones, as it resists to temperatures down to about -4 °C even if with damage to the foliage, temperatures of a few degrees less destroy the aerial part, but it can vegetate again from the rhizome, especially if well mulched.

When in open ground, it requires an exposition in full sun or in filtered sunlight, even if it stands the partial shade, light soil, draining, rich of organic substance and a position sheltered from the strong winds which would cause damage to the great leaves. During the vegetative period, the irrigations must be abundant, without leaving the soil to dry up, with regular fertilizations, and reduced in winter.

If in pot and in apartment, the most luminous possible position is to be chosen, and also a soil with the above described characteristics, with possible addition of coarse sand for about the 30% in order to improve the drainage, kept constantly humid in summer, rather dry in winter, with temperatures over the 14 °C; the fertilizations in summer must be done preferably with slow-release products.