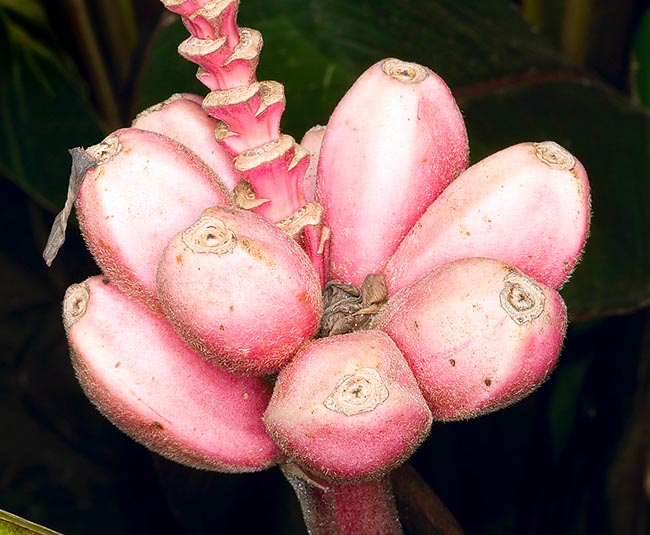 This species is native to India (Arunachal Pradesh and Assam) and northern Myanmar, where it grows in the humid forests at low altitudes.

After some, the genus was honoured to the Roman physician and botanist Anotnius Musa (63 BC-14 AD), after others, the name comes from the Arabic “mawzah” = banana; the name of the species is the Latin term “velutina” = velvety, derived from the Medieval Latin “velutum” = velvet, with reference to the surface of its fruits.

The Musa velutina H.Wendl. & Drude (1875) is a rhizomatous, caespitose, monocotyledonous herbaceous plant, with a short and underground stem and a pseudostem, formed by the foliar bases strictly wrapping each other, of 1-1,8 m of height and 5-8 cm of diameter. The pseudostem ends in a tuft of ovate leaves, about 1 m long and 35 cm broad, of an intense green colour, waxy, with central nervation, prominent in the lower page, of pink colour and thin parallel lateral veins.

The inflorescence, on a reddish pubescent peduncle, is a terminal spike with tubular orange flowers united in groups along the floral axis, with each group covered by a pink, deciduous, lanceolate bract. The flowers at the base are female or hermaphrodite, which may self pollinate, placed in about 5 groups of 3-5 flowers each, on a row, followed by the male ones, averagely 5 per bract, they too on a row and deciduous. The fruits, on a short peduncle, are about 7 cm long berries, sharply truncated at the apex, of a violaceous colour, pubescent, with three or more ribs, with a white pulp where are dipped several black seeds, tubercled, flattened, of about 5 mm of diameter and 2-3 mm of width. The fruits open spontaneously when ripe (dehiscent) and are to be deemed as not edible because of the presence of the very hard seeds, even if the pulp has a pleasant taste, just a little acidulous.

After the flowering the pseudostem dies, but new suckers continue to produce from the rhizome. It easily reproduces by division and by seed which is to be previously scarified, in order to notch the hard and waterproof surface, or dipped for 2-3 days in water before to be planted in a sandy substratum, kept humid, at the temperature of 22-26 °C and in luminous position; the seeds may take a month or more for germinating.

The Musa velutina is one of the most diffused banana plants, not only for its intrinsic characteristics, but also for the speed of growth, the hardiness at the level of the rhizome and the facility with which it blooms and fructifies in pot in indoor spaces. It is cultivable in open ground in the tropical, subtropical and temperate climate zones, as it resists to temperatures as low as about -5 °C, even if with the loss of the aerial part, and to some degree less at the level of the rhizome, if it has been well mulched, resurfacing in spring and flowering by late summer. Thanks to its speed of growth, it is, in fact, the only Musa capable to complete the life cycle, starting from the rhizome, in about 20 weeks.

It requires an exposition in full sun or slight shade, light soil, well drained, rich of organic substance, acidic or neutral, kept constantly humid in the warmest months, and a position sheltered from the wind as this would damage the leaves. When in pot and in apartment, the most luminous position is to be chosen, as well as a soil with the aforementioned characteristics, and kept constantly humid in summer, rather dry in winter. In the origin countries, inflorescences and fruits are utilized in the religious celebrations as well as in the festivities in general.