The genus Myripristis, includes few exotic species with a bright colouration, even if usually uniform, rather similar to the fishes of the genus Holocentrum, the so-called soldier fishes. The Myripristis are afferent to the group Fishes (Pisces), class Osteichthyans or Osteoichthyans (Osteichthyes), subclass Actinopterygians (Actinopterygii), order Beryciforms (Beryciformes), family Holocentrids (Holocentridae), genus Myripristis.  The order of the Beryciforms (Beryciformes) is an order of ray-finned fishes still little understood, and, to say the truth, also little studied. It is formed by 16 families, 57 genera and about 219 species.

Amongst the few species of the genus Myripristis, one of the most studied by the marine and ichthiological biologists is the Pinecone soldierfish (Myripristis murdjan Forsskål, 1775), object of this text. We must not forget the Anglo-Saxons, when calling it in such a way, create confusion, because, as previously said, the epithet of soldier is specific of the species of the genus Holocentrum, always afferent to the beryciforms holocentrids.

The Myripristis murdjan, like the other species of the Myripristis, is present in the Indian and southern Pacific Oceans, especially in the Indo-Pacific region.

These holocentrids do live preferably in the Coral Seas, where they get more abundant nourishment, formed by plankton and crab larvae and where they mostly remain in the low waters, from 1 to 50 m, carrying on a nocturnal and gregarious life. They can live also within the reefs and in the little deep marine lagoons; often they make a benthic-pelagic life, inside or close to marine caves. Having poor quality flesh, they are not usually fished for alimentary purposes, not even by the autochthonous populations, whist, due to their elegant livery, they are fairly appreciated as ornamental and aquarium fishes. 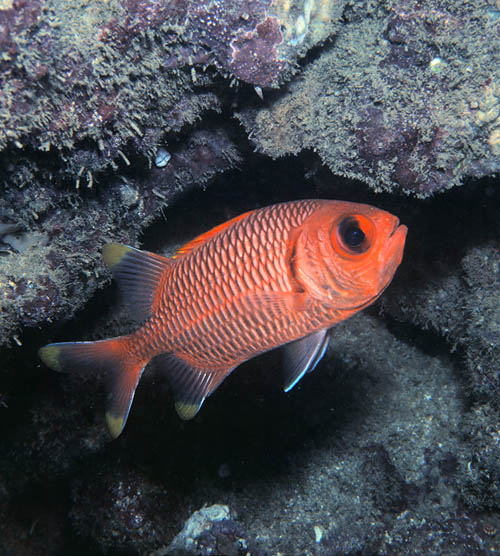 The Myripristis murdjan is often found near the grottoes © Giuseppe Mazza

Like all Holocentridae, the Myripristis in a general line, have the body covered by very much robust ctenoid scales; we remind that the term “ctenoid” comes from the ancient Greek and means “having a comb-like shape”.

As a matter of fact, in the scales of these fishes, and so also of the Myripristis murdjan, we may observe along the edge several and tiny very sharp, spin-like, protuberances which render these fishes very much rough to the touch.

In the fishes of this genus, in a general line, the body is stocky, fairly compressed on the sides; the snout is short and blunt, the eyes are particularly large and dark.

The tail, flat and forked, is implanted on a robust and fairly wide caudal peduncle.

Due to the general characteristics and the fairly average dimensions, these fishes get close to the Holocentrum, but they may differ from them for the shape and for the absence of the strong armours, formed by thorny rays exceptionally thickened on some fins and by robust opercular spines which have granted the name of soldierfish to the species afferent to the genus Holocentrum.

Furthermore, the soldierfishes have a more slender silhouette, a more varied livery and, especially, the profile of the snout is more elongated, with smaller eyes. The pinecone soldierfish is remarkable mainly for its vivid colours. The body is of a nice, almost uniform, bright red colour; the fins are bright red too, uniform and homogenous on the pectoral, the ventral and the thorny rayed anterior dorsal ones, whilst the hind dorsal and the anal ones are red with a big black dot on the rear corner. A similar colouration is also shown by the tail, red at the centre and with the apices of the lobes black.

The shape of the body is stocky, relatively high; the snout is short and quite blunt at the apex, as is the case of all the species of this genus. There is no somatic sexual dimorphism between male and female, and usually they are from 18 to 25 cm long, even if 60 cm specimens have been caught.

It is a gregarious species with a benthic-pelagic life; in fact, during the night, they get out from the coastal crannies or from the marine grottoes, for nourishing themselves; the reproduction is oviparous: the eggs and the larvae (embryos) are planktonic. The vulnerability index of this species is of 35 over 100.