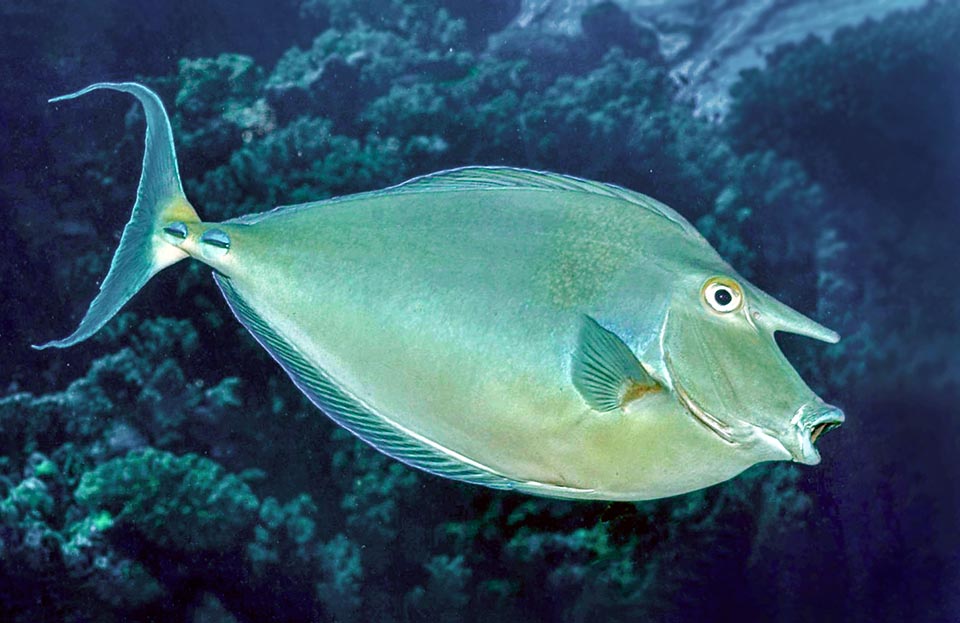 Naso unicornis (Forsskål, 1775), commonly known as Bluespine unicornfish, belongs to the class of the  Actinopterygii, the ray-finned fishes, to the order of the  Perciformes, and to the family of the Acanthuridae, that dedicated to the surgeonfishes,  counting 6 genera and 84 species, characterized, even if in this species the defensive organ is a little different, by a sharp, extractable blade present on both sides of the caudal peduncle.

About twenty of these fishes have been regrouped in the family of the Nasinae, the so-called unicornfishes, because of the strange and long bony protuberance on the snout.

They have all been assigned to the genus Naso, coming from the Latin word “nasus” = nose, with reference to this odd bump growing near the nostrils, at the place of the nose. The specific name unicornis, states, always in Latin, that the appendage is unique. 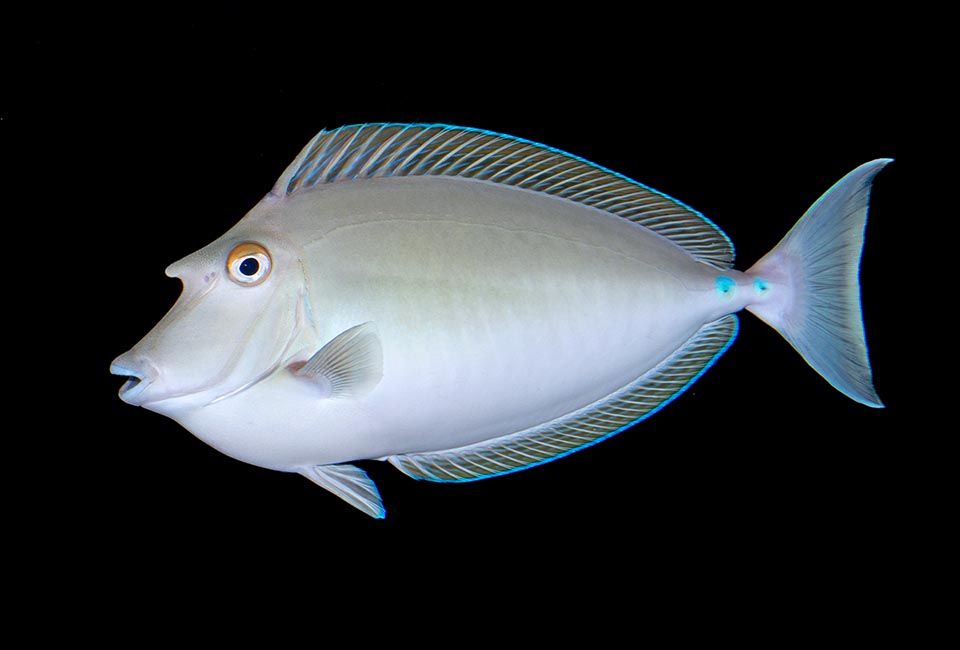 Young adult with growing bony horn. In the females is slightly shorter, and the caudal fin filaments are longer than in the males © Giuseppe Mazza

Naso unicornis has a very vast distribution in the tropical Indo-Pacific. Indicatively, starting from the Red Sea, we find it along the African coast up to South Africa, in Madagascar and in the Comoro Islands, Réunion, Mauritius, Seychelles and Maldives. It is present along the coasts of India, Sri Lanka, Thailand, Malaysia, Indonesia and then, northwards, in Vietnam, Philippines, Taiwan, China, Japan and South Korea. In Oceania, after Australia and Papua New Guinea, it reaches New Caledonia and, more south, Lord Howe. Going eastwards, it has colonized the Fiji Islands, Tonga, Samoa, Cook Islands, Hawaii and finally French Polynesia and Pitcairn Island.

it is a diurnal benthopelagic fish that goes swimming also in the canals of the lagoons, and offshore, careless of the currents, on the outer side of the reefs, down to 180 m of depth, but it can be found also in one metre of water among the madreporic formations and the rocks, were the algae it nourishes of, do thrive. Conversely, the young prefer the calm waters, and often they grow on the sandy and clastic bottoms of the lagoons. 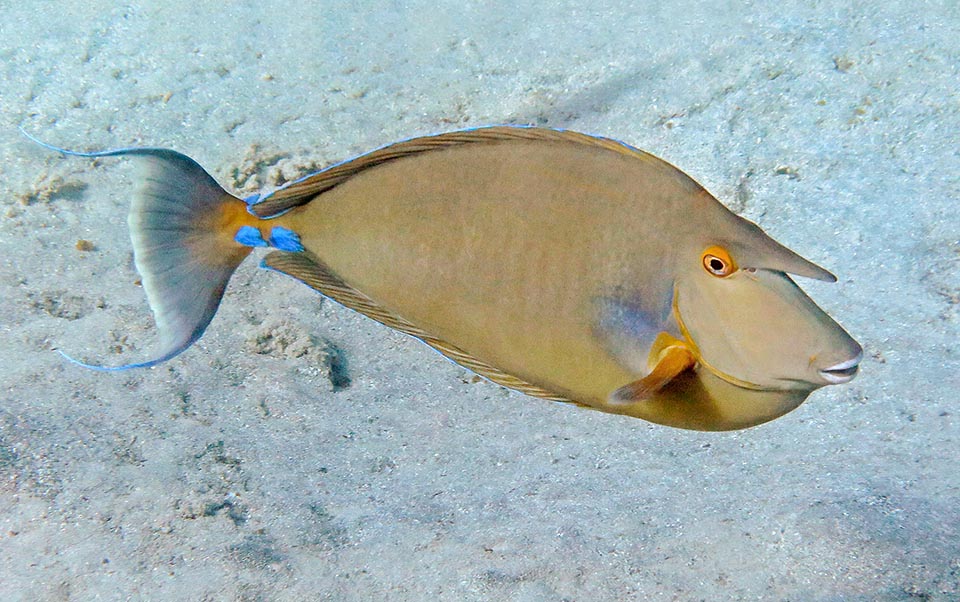 Very variable livery after the environment and the mood of the fish. The range, very vast, occupies almost all tropical Indo-Pacific © Gianemilio Rusconi

The Bluespine unicornfish can reach the length of 70 cm, but usually it slightly exceeds the 50 cm. The body is oval, very flat, so much that, in extreme instances, even if it has two showy cutting blue hooks per side on the caudal peduncle, when it realizes that the attacker is too big, it adheres perfectly, flattening, at the base of big rocks or madrepores thus hindering the aggressor to swallow it. Strategy that is adopted, at times, with mimetic pajamas, also for the night rest.

The profile of the head is concave, and the bony horn, about 12 cm long, almost never exceeds the vertical of the mouth. This one is small, with fleshy lips, clear or bluish, and serrated teeth to cut the algae it nourishes of. The eye is prominent, placed far from the mouth at the base of the body. It is big, with silvery iris and a golden outline widening up like eyebrows. 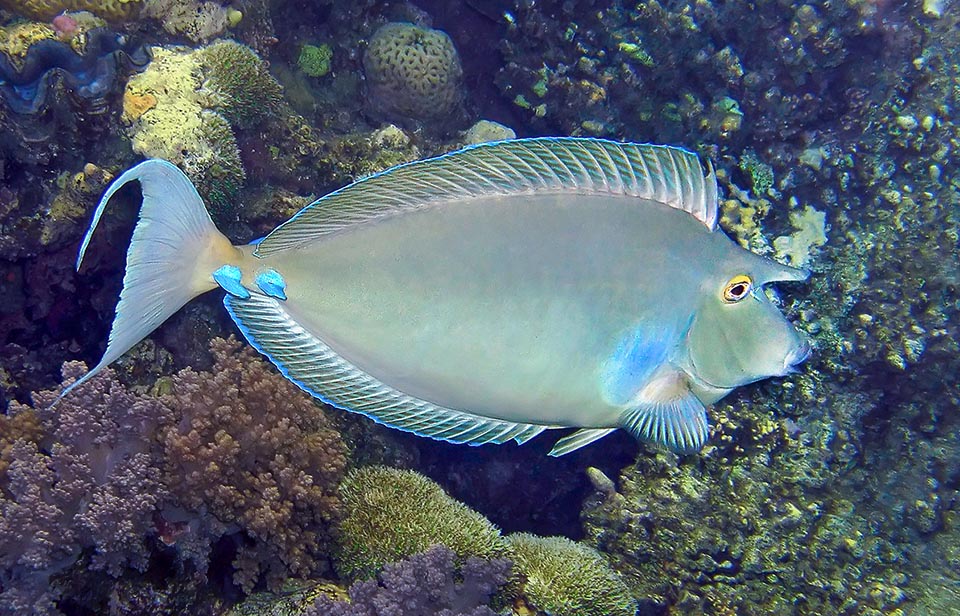 The caudal fin is lunate with filamentous lobes edged with blue growing out of all proportion with the age, slightly longer, as happens for the horn, in the males.

The body, covered by very small scales, looks almost smooth. It may quickly change colour thanks to the chromatophores after the mood of the fish and its camouflage needs. Usually it is silver grey or bluish, as the Italian name reminds, but it can be also greenish or bronze, and we often note a blue zone close to the pectoral fin.

Naso unicornis nourishes mainly of brown and red algae, mostly belonging to the genera Dictyota, Sargassum, Padina, Turbinaria and Jania, without ignoring the debris and the diatomaceous film and the microscopic algae it finds on the seabeds. 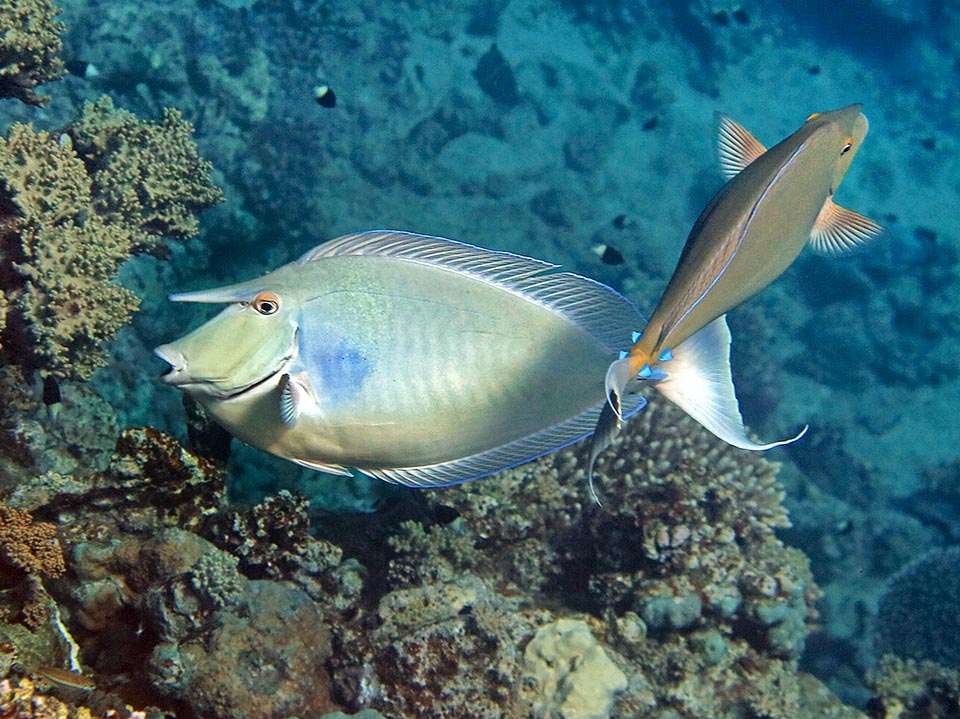 A couple. The female, right, is full of eggs. In the coupling ritual the spouses move up and down near the surface freeing the gametes © Gianemilio Rusconi

It is useful for the reefs as it cleans the madrepores from the infesting filamentous algae, but when it eats some poisonous dinoflagellates like the Gambierdiscus toxicus, its flesh can become dangerous for the man and not rare are the cases of ciguatera, a food poisoning, with no antidotes, with digestive, neurological and cardiovascular symptoms that may last even some months.

Solitary at times, the Bluespine unicornfish lives often in groups, more numerous during the reproductive period.

It reaches sexual maturity when about 35 cm in size, and the couplings, linked to the lunar cycle, usually occur in the evening. The couples then move up and down, in jerks, close to the surface, freeing the gametes. The eggs are entrusted to the currents.

The larval phase lasts almost two months. Thus, the young often grow in faraway locations, colonizing other reefs and this explains the enormous diffusion of this species. 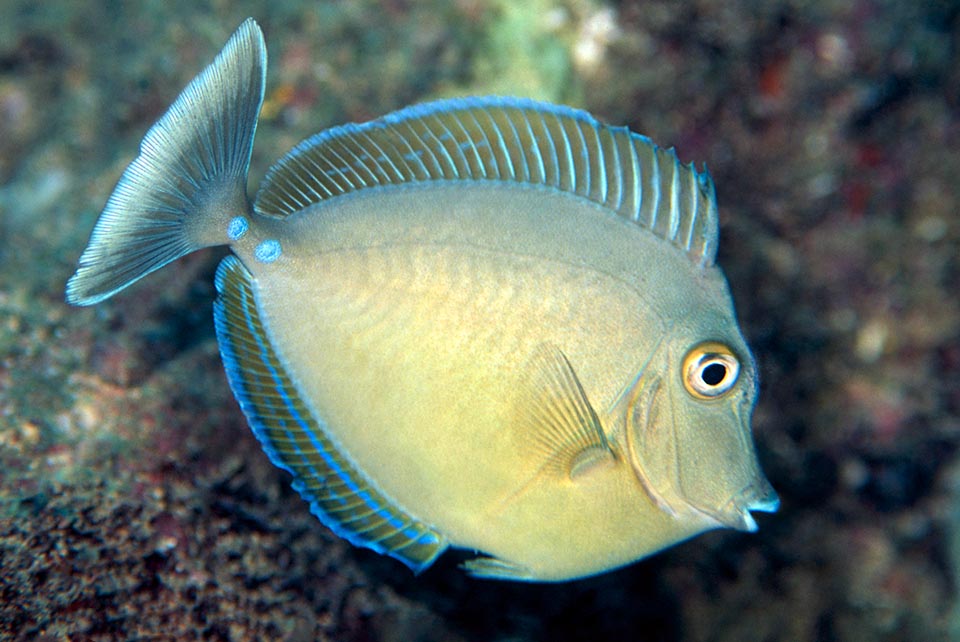 Of peaceful nature, Naso unicornis is often a guest, like Naso elegans, of the large public aquaria, the only ones able to ensure it, seen its feeding and its size, a decent life. The maximum reported age is 58 years.

The resilience of the Bluespine unicornfish is low, because are needed 4,5-14 years for reforming the populations decimated by the events, but the vulnerability index is also low, marking today, in 2020, only 32 on a scale of 100. In fact, play in favour of this species, the enormous distribution area and the fact that in nature it will never die starving.