The Tawny nurse shark ( Nebrius ferrugineus Lesson, 1831)  belongs to the subclass of the  Elasmobranchii, the cartilaginous fishes, order of the  Orectolobiformes and to the family  Ginglymostomatidae,  whose name comes from the Greek words “gynglimos” (zip fastener) and “stoma” (mouth) referring to the way of interlocking closure of the jaws that does not give the prey any hope of escape.

The name of the genus comes from the Greek epithet “nebris” (fawn skin) whilst the Latin “ferrugineus” refers to the rusty colour and gives the name to the species. In fact, the whole indicates a shark with a skin having excellent characteristics, of fawn colour.

Conversely, the Italian name of “squalo nutrice” comes from the translation of the English nurse-shark, which, in turn, may have derived from the Nusse or Husse words that meant shark. A last hypothesis on the name “nurse” takes shape from the Oppian of Cilicia verses and from traditions of antiquity that told of small sharks taking refuge into the mouth of their parents, if threatened by the marauders. Instead, fawn has been added to distinguish it from its homonym, the Nurse shark ( Ginglymostoma cirratum Bonnaterre, 1788) of darker colour, living in different geographical zones and slightly more aggressive. 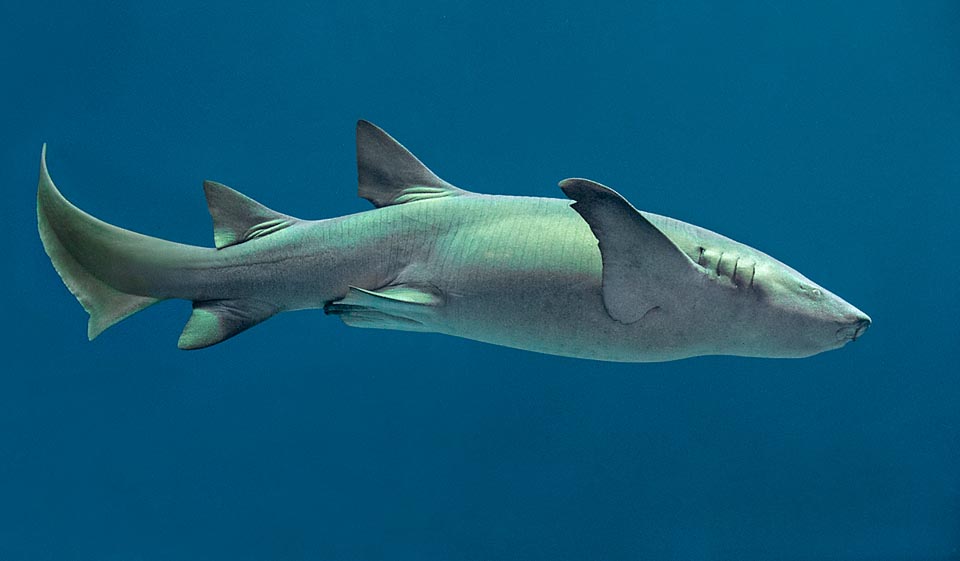 Even more than 3 m long, the Tawny nurse shark (Nebrius ferrugineus) is vastly diffused from the Red Sea and East Africa to Oceania, avoiding the cooler zones © G. Mazza

It is a tropical and subtropical waters shark, present from the Red Sea and the Persian Gulf up to the extreme parts of Oceania, of which it however avoids the cooler zones such as the waters of the southern zone of Australia. It is also present in Madagascar and on the African coast of Somalia and Mozambique.

Nebrius ferrugineus lives in close contact with the bottom, from just under the surface up to about 70 m. Quite often, during the day, it can be found sheltered under natural ledges or in grottoes where it is possible to meet it in numerous schools where the individuals rest at times perched on each other. However, it is also possible to find it in algal environments and on sandy clearings that intersperse the barrier. It is usually more active during the night.

The maximum recorded length is of 3,20 m, but the average size of those who can be met is of 2,50 m. The toughness of its body leads people to think that it may reach and maybe exceed 150 kg of weight, but there are no scientific reports in this regard. 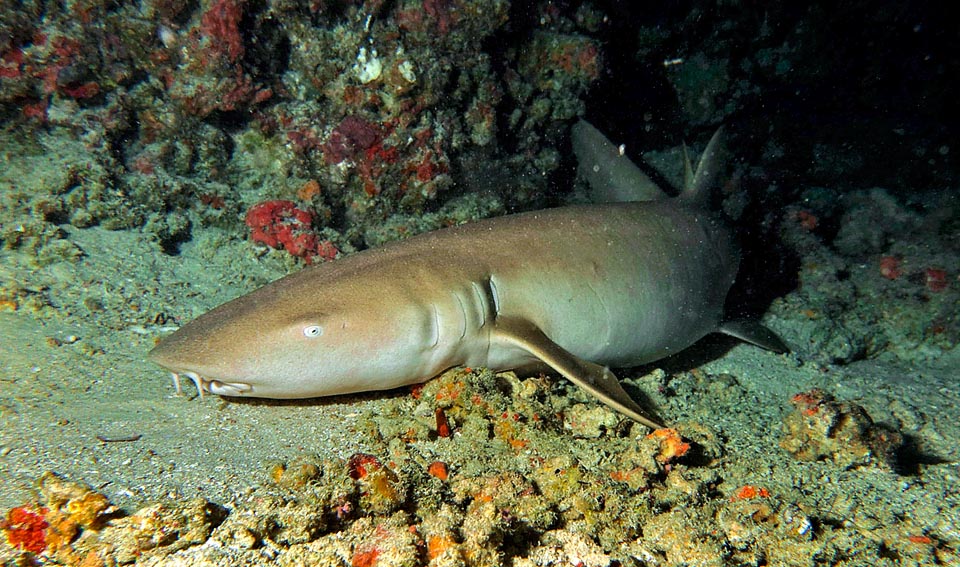 Spends the days on the seabed, sheltered by caves or madrepores formations, usually goes hunting during the night, without going below 70 m of depth © Sebastiano Guido

The main characteristics when met underwater, are the fawn body, robust and elongated from which depart two very broad pectoral fins, that slim down by their end in slender tips.

Two broad triangular dorsal fins emerge from the back, the first one being one and a half ampler than the second. It is at an acute angle and looks as placed well back on the body. When measuring the shark, it can be considered as emergent at about half the distance between the tip of the snout and the extremity of the tail. Smaller than the first but with tips of similar profile, the second dorsal and the anal, that, though opposed to this, emerged from the body in a more rearward position than the dorsal. The two pelvic fins of an almost rhomboid shape, are placed almost under the first dorsal fin.

An extremely long tail lying backwards and almost without inferior lobe completes the outline and enriches it with its rich rear fan.

The eye, clear, with a tiny black iris, is little visible, whilst do stand out, unmistakably, over the mouth, two long nasal barbells. The mouth, of small size, presents several racks sided by small and acute teeth that when examined, out of the water, present several small cuspids placed, side by side, to the longer, central one.

The dark back gradually fades in colour until it reaches the creamy white belly. 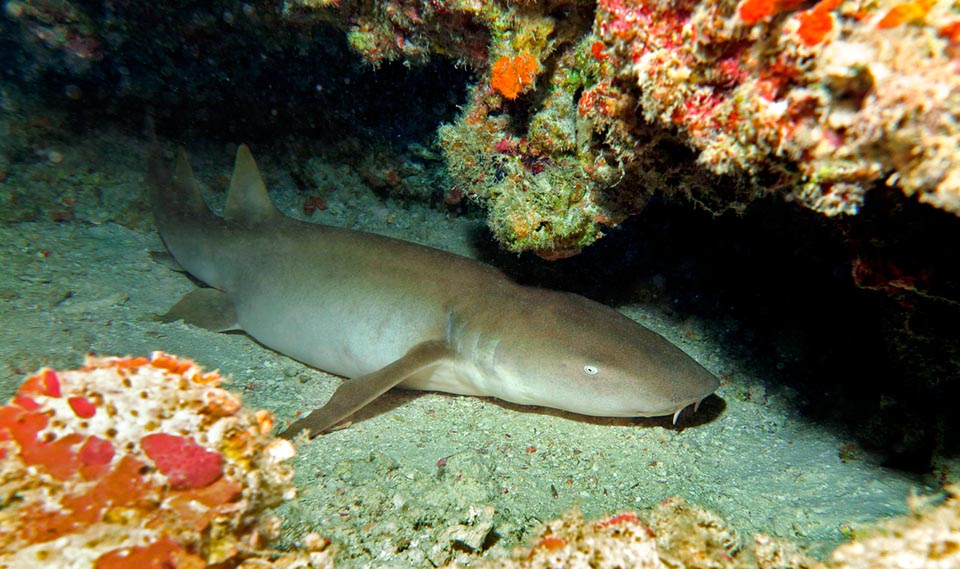 It eats invertebrates and any sort of fish it sucks trapping them in its huge mouth with interlocking closure that takes away all hope of escape to the preys. Usually harmless for man, it has a very low resilience and unluckily stands in the “red list” of the species under risk of extinction. The vulnerability index is high, reaching 77 on a scale of 100 © Sebastiano Guido

It can be considered as harmless, though, provoked and unable to escape, it could react causing lacerated bruised wounds. Therefore, it can be approached with the warning, common to any approach, of avoiding sudden movements and always keeping an eye on any even small change in the posture of the fish, that might give an advance notice of an attack. With a little luck it is possible to meet several individuals gathered together in some grotto. It nourishes of fishes and of any sort of invertebrates it hunts mainly in the night hours sucking them from the bottom (thanks to the extension of the pharynx that serves as suction pump) as we would do by sucking a spaghetti clumsily escaped from the fork.

The species is ovoviviparous and the puerperal gives birth after the gestation, a litter of no more than 8 young, that upon birth measure forty to sixty centimetres. The population is in sharp decline due to the habitat degradation and the fishing that exploits its meat, the fins, and the oil extracted from the liver. Also the skin is very prized. The resilience of the species is very low and the time of doubling the population can exceed 14 years. The vulnerability index is high, reaching 77 on a scale of 100.