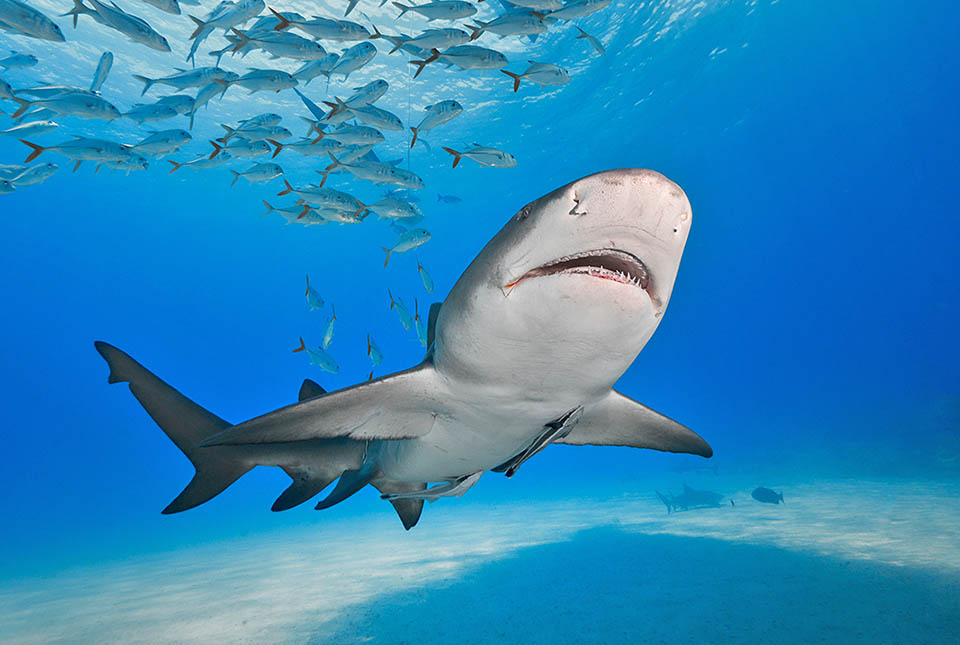 Even 3 m long, Negaprion brevisotris is present on both Atlantic coasts and in some sites of western Pacific © Rafi Amar

Known as Lemon shark due to the colour of the sides that recall the sands of the seabeds, Negaprion brevirostris (Poey, 1868) belongs to the class of the Chondrichthyes, the cartilaginous fishes, to the order of the Carcharhiniformes  and to the family of Carcharhinidae that counts 11 genera and 59 species with pointed snout and 5 gill slits per side that end at the junction of the pectoral fin, round eyes with internal nictitating eyelid and teeth like daggers; fishes well tested over time as they were already swimming in the Eocene, about 50 million years ago.

The name of the genus Negaprion comes from the Latin “nego” = to deny and from the Greek “πρίων” (prion) = saw, with reference to the shape of the teeth that do not end in a serrated cusp like in other fishes but are all sharp and pointed. 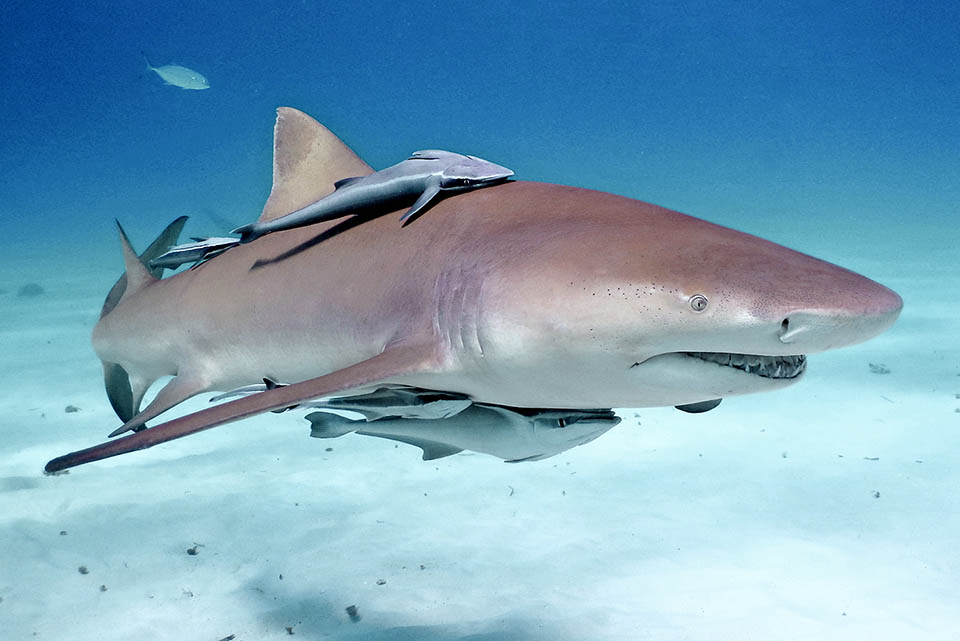 It’s commonly known as Lemon shark, due to the golden brown hues on the sides, at times mimetic on the sandy seabeds © Michael Eisenbart

Finally, the specific term brevirostris reminds us, in Latin, that the snout, even if pointed, is short.

It is a species frequent in the tropical waters of the Atlantic Ocean, in particular in the Caribbean zone and along the coasts of South America up to Brazil, but we find it also In Africa on the the opposite side of the ocean, in Cape Verde islands, in Gambia, Senegal and Ivory Coast. In the Pacific, it is reported in Vanuatu, Peru and in Ecuador. Then, going up northwards, it has colonized all the western America coast up to the peninsula of Baja California in Mexico. 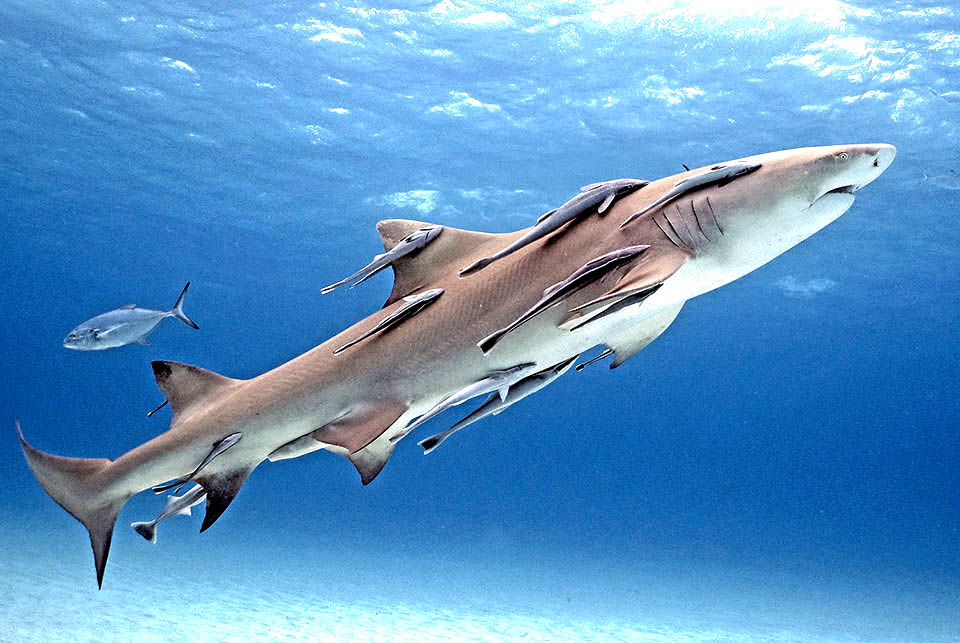 In profile, remorae allowing, it is easy to recognize because the first and the second dorsal fins are almost identical © Michael Eisenbart

The Lemon shark is a mainly diurnal fish when young and mainly nocturnal when adult. It lives along the coasts in shallow waters, often around the 30 m, even if, in winter, may reach greater depths up to about 90 m.

It frequents coral environments, sandy seafloors, formations of mangroves and brackish estuaries, often entering for short traits even the fresh waters as happens, for instance, in the Amazon delta. When it is found in open seas, where it usually keeps swimming on the surface, it means that it is migrating. 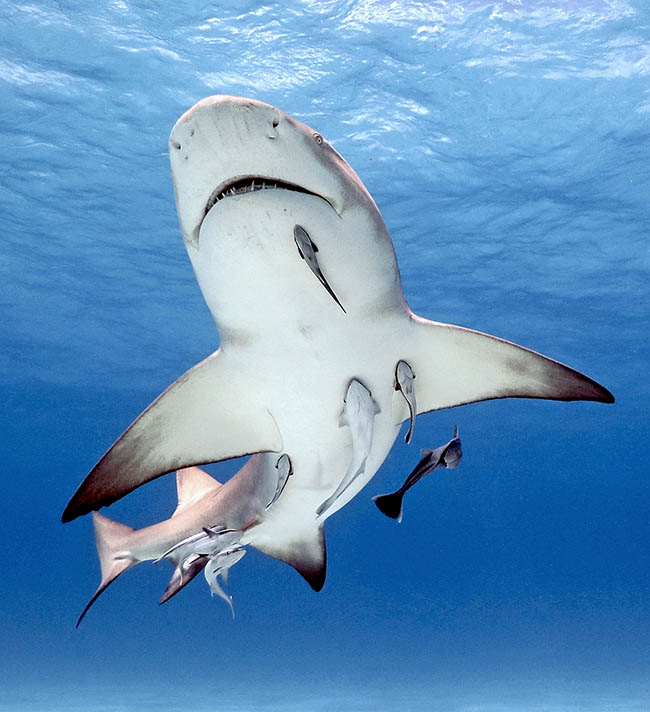 The belly is white, the tip of the fins is dark and the huge wide open mouth is wider than long © Michael Eisenbart

It may be a male looking for a partner or a female going back to the site where, every two years, delivers, usually a mangrove formation, where the young find abundant food and shelter between the roots in shallow waters without the risk of being preyed upon.

An environment where they spend the first years of their life and learn bit by bit to know the preys and the hunting techniques by observing the peers, the adolescents and the adults in a complex social relationship thanks to a big brain if compared to the size, comparable to that of the birds and of the mammals.

They observe and memorize.

In Florida, a captive specimen has even learnt to press a bell for getting food in exchange.

Negaprion brevirostris measures averagely 2,4 m with a stocky and fusiform body of 150 kg but are reported records of 3,4 m and 183 kg.

The livery, without drawings, is grey or yellowish brown with the ventral side paler and the final part of the fins dark.

The pectoral fins are triangular and the caudal is heterocercal, that is asymmetric, with the upper part, much bigger, that displays a conspicuous notch at the apex.

The head is flat. The snout has a huge mouth, wider than it is long, with 15 teeth per side on the upper jaw and 13-14 on the lower one. These are particularly pointed and sharp, for holding the victim, whilst those above have a slight serration on the sides, like the kitchen knives, for cutting it in pieces. And as if they were not enough, we also note 3-4 smaller teeth in the fore part of both jaws. 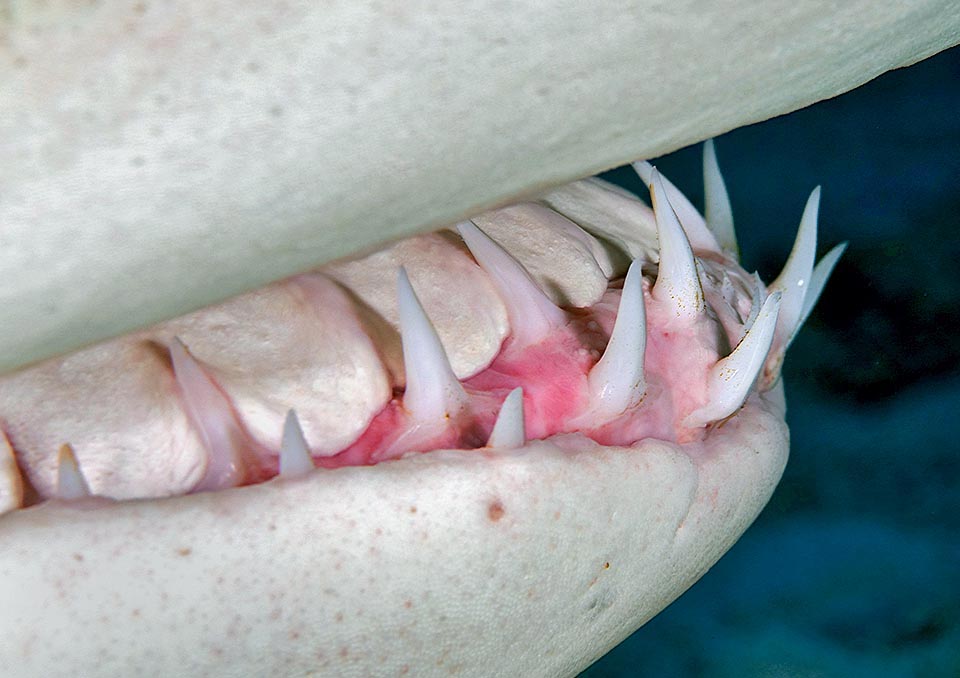 The teeth, about 30 per jaw, are sharp blades. Those below holds the bite while it shakes the head, and the upper ones, slightly serrate on the sides, tear off flesh in pieces © Rafi Amar 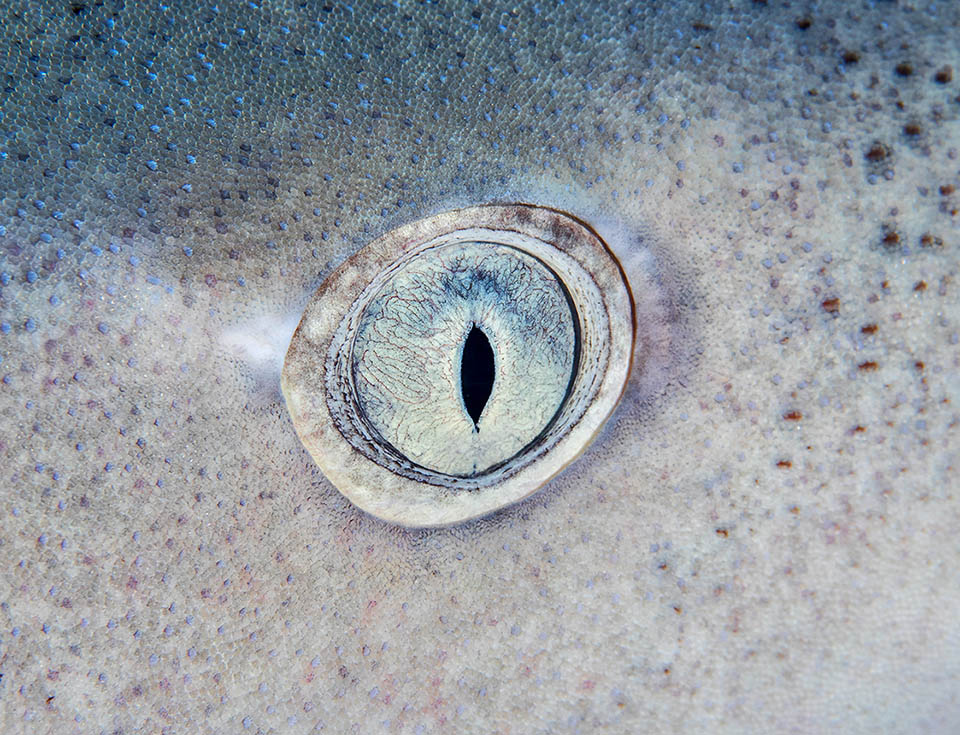 Sight, hearing and smell are excellent. The eye is round with inner nictitating eyelid © Rafi Amar 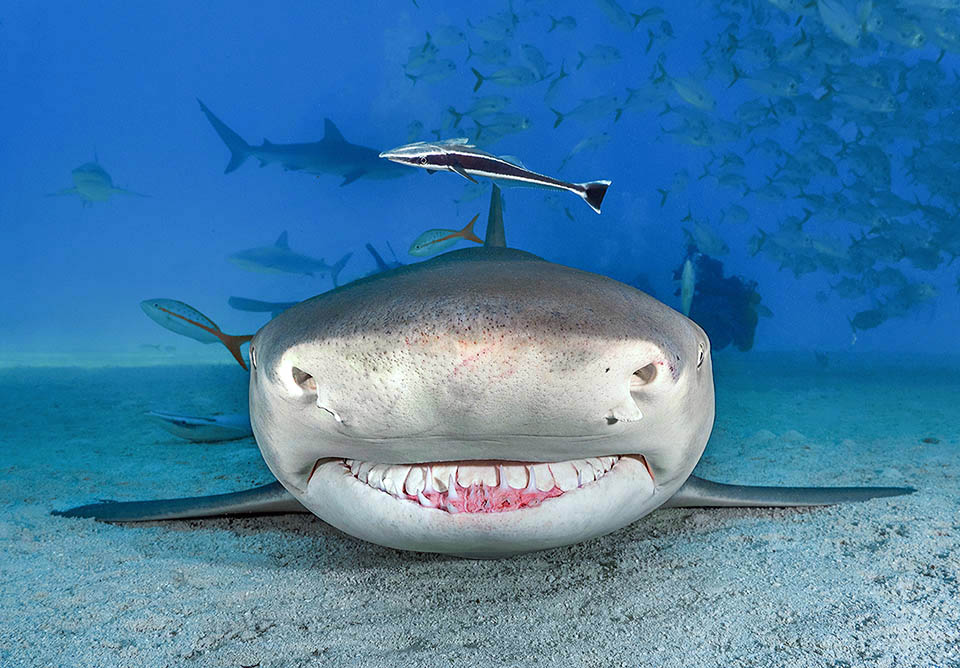 Like all sharks, for hunting in darkness, Negaprion brevirostris has on the head the ampullae of Lorenzini, electroreceptors particularly sensitive that sense the electrical pulse emitted by the prey. They appear on the outside as many tiny pores: a fine dotting present all over the head and hence well visible on the snout © Rafi Amar

The body is protected by tiny placoid scales. Sight, hearing and smell are excellent and for hunting in the darkness has on the head, like all sharks, the ampullae of Lorenzini, particularly sensitive electroreceptors that appear on the outside as a fine dotting: many small well visible pores on the snout that sense, even in the darkness, the electrical pulses emitted by the preys.

When swimming, the Lemon shark breathes through its five gill fissures per side, but does not need, as occurs in other sharks, to be in continuous movement, and may rest staying on the seabed quietly carrying the water to the gills with the movement of the mouth. 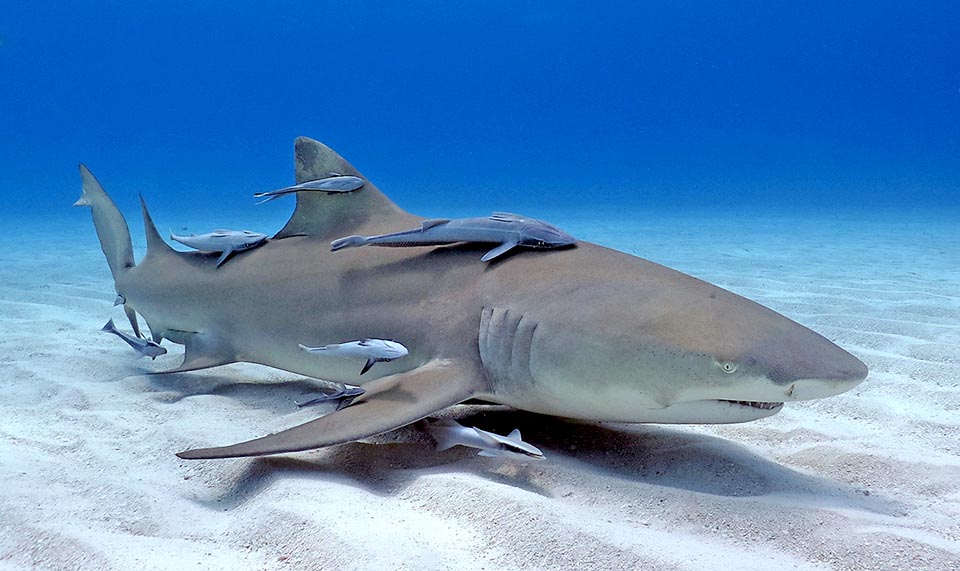 The 5 gill slits close to the fin come into play if the fish swims, whilst when resting on the seabeds to oxygenate the gills the movements of the mouth are sufficient © Michael Eisenbart

Negaprion brevirostris has a diet that changes depending on the age: it nourishes mainly of bony fishes such as groupers, tunas, carangids, mackerels and scarids, but also of cartilaginous fishes like rays and young sharks, to which add octopuses, squids, lobsters and even unwary seabirds that land, for resting on the surface of the sea.

The Lemon shark loves about 25-30 years and reaches the sexual maturity when about 11-13 years old, when it does exceed 2 m. It has been calculated that an adult needs at least 1,5 kg of meat per day and the 70 cm young, for growing, must prey at least 3% of their weight for about three months. 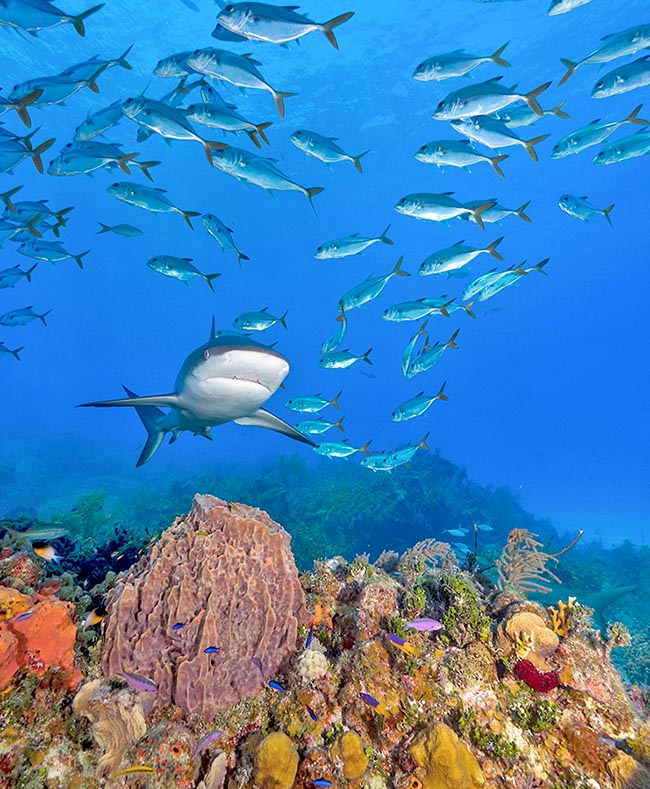 The lemon shark never hunts at random. It thinks and before attacking evaluates the ease of capture and the yield © Rafi Amar

During their first years of life, they look for food on the seabeds with a predilection, in the Caribbean, for the Parrotfishes (Scaridae), then, growing, make slaughters among the fishes moving in dense schools.

They move swimming slowly and choose a prey usually of intermediate size, evaluating the ease of capture and the yield.

They swoop down upon it lightning-fast braking with the pectoral fins when in touch for biting deeply into the victim stunned by the impact.

Shaking the head, they tear off a first shred of flesh and the smell of the blood excites them, often attracting also other sharks of the school.

Though hunting solitary, the Lemon shark in fact goes swimming in free aggregations that at times can reach the 20 individuals and allow it to control a territory.

Due to their size, the scuba divers are not considered as a prey: the incidents with man are rare and occur only if the animal is being provoked.

Mating usually takes place in spring or in early summer.

The male grabs with its teeth a pectoral fin of the female and fecundates it in parallel swimming, like during the courting, inserting into the cloaca of the female one of its two pterygopods, the cylindrical extensions of the posterior flap of the pelvic fins that carry the gametes.

Recent genetic studies have proven that they are polyandrous, because the pups, 60-65 cm long, do not necessarily belong to the same father.

The meat of the Lemon shark is edible, the skin is used as leather, and after some, the soup of fins is a delicacy. Also due to the increasing sporting activities the vulnerability index to fishing is on the rise, marking nowadays, in 2022, already 73 on a scale of 100. 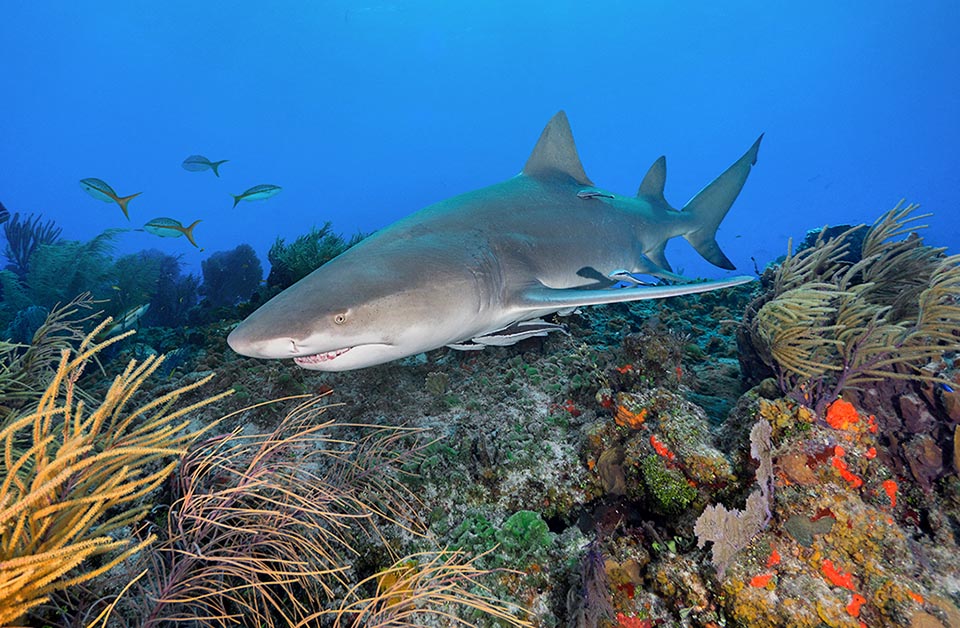 Resilience is extremely low because at least 14 years are necessary for doubling the populations decimated by the events.

As a consequence, Negaprion brevirostris is classified, like many sharks, as “Vulnerable” in the Red List of the International Union for Conservation of Nature (IUCN).