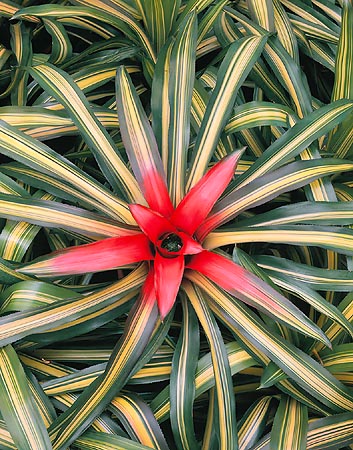 The ‘Tricolor’ variety is the most popular © Giuseppe Mazza

The Neoregelia carolinae (Beer) L.B.Sm. (1939) is native to the pluvial forests of eastern Brazil.

The genus is honoured to the German botanist Eduard August von Regel (1815-1892), with the addition of the Greek prefix “néos” = new, in order to distinguish it from the pre-existent genus Regelia of the family of the Myrtaceae ; the species is honoured to Carolina Morren, wife of the editor of the magazine Le Belgique Horticole, Charles Jacques Edouard Morren (1833-1886), an authority in the field of the Bromeliaceae.

Evergreen, herbaceous plant, monocarpic (it fructifies only once, then dies), stemless, epiphytic, about 20 cm tall with a funnel-shaped rosette of ribbon-like glossy green leaves, about 20 cm long and 3 cm broad, with thorny edges, which form at the centre a hollow usually filled up with water. The leaves surrounding the central cavity before the blossoming, become of a lively red colour, which persist for about one year, whilst the inflorescence is formed by an extremely short raceme with small flowers of a lavender colour placed at the same level and almost hidden at the bottom of the cavity.

It usually reproduces by division, the plant before dying after blossoming, produces at the base new plants which can be taken off when they are of a third of the mother plant, the reproduction by seed is usually kept for the hybridization. One of the oldest varieties, and still between the most popular, is the Neoregelia carolinae ‘Tricolor’ (see photo), with cream and white stripes on the leaves and a widespread pink tone, more evident at the centre of the rosette, especially in condition of high luminosity. Plant cultivable in open spaces in the tropical and humid subtropical climate zones, where it can be utilized for creating masses of colour or edges of great ornamental effect. It requires lot of humidity and a high luminosity, in order to get a major liveliness of the colour, but not the direct sun. When in pot, in its nowadays countless varieties, it is perhaps the most utilized plant for decorating indoors, where it is able to furnish a long lasting note of colour even in the dark corners.

In apartment, it is to be preferably placed in a luminous position, but it adapts also to situations of scarce luminosity; temperatures are to be kept over 14°C, best 18-22°C, with a very draining substratum, which can be formed by peat and sand, or other aggregates (agriperlite, vermiculite, etc.), kept slightly humid, and with some water at the centre of the rosette if the temperatures are over the 18°C, with lower temperatures there is the risk of formation of rottenness, in any case, it is good to avoid, immediately after the blossoming, the permanence of water, which would cause the rottenness of the residua of the flowers, with consequent unpleasant smell. When in presence of very calcareous water, in order to avoid anti-aesthetical deposits at the centre of the rosette, de-mineralized water is to be utilized; in summer and in warm climates, it is good to renew the same in order to avoid it to become a nest for mosquito larvae.