The species is native to Brazil (Bahia, Espírito Santo, Rio de Janeiro and Sao Paolo) where it grows in the coastal belt (restinga) in the under-wood of the forest as well as in exposed sandy and rocky sites and on shrubs and mangroves close to the sea.

The genus is dedicated to the German botanist Eduard August von Regel (1815-1892) with the addition of the Greek prefix “νέος” (néos) = new, to distinguish it from the preexisting genus Regelia of the family of the Myrtaceae; the name of the species is the Latin adjective “cruentus, a, um” = gory, stained of blood.

The Neoregelia cruenta (Graham) L.B.Sm. (1939) is an evergreen herbaceous species, monocarpic, acaulescent, terrestrial, epiphyte or lithophyte, 25-40 cm tall and 0,8-1 m broad, formed by an infundibuliform rosette of spirally arranged leaves that allow the accumulation of water at their base as well as in the central cavity. Oblong leaves with rounded mucronate apex and margin provided of brown-reddish thorns, coriaceous, of pale green colour with a purple red dot at the apex, 40-60 cm long and 6-8 cm broad. 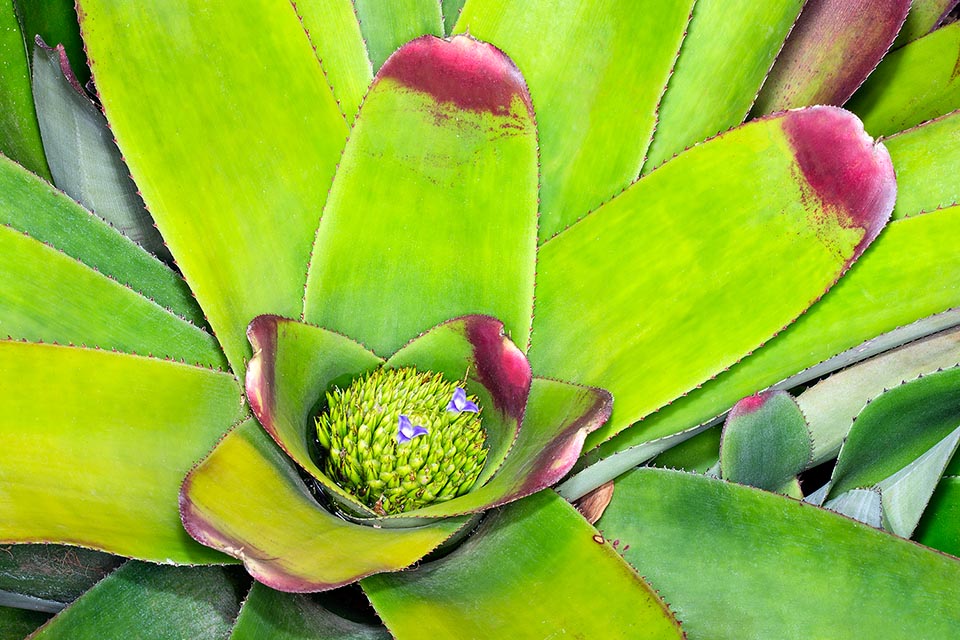 Inflorescence, on a short scape at the centre of the rosette, simple, racemose, surrounded by an involucre of ovate bracts with green acuminate apex, with rachis extremely short so much to arrange the flowers almost at the same level on the bottom of the cavity. Ovate-linear floral bracts with a thorn at the apex, of pale green colour, 5-6 cm long, numerous flowers, ephemeral, opening in succession, calyx with 3 sepals, united at the base, for about half of their length, of pale green colour, 2,5-3 cm long, corolla with 3 petals united at the base, with acuminate apex, white below, of violaceous colour at the apex, 3-3,2 cm long, 6 stamens inside the corolla arranged in two series of 3 and oblong inferior ovary about 1 cm long.

The fruits are cylindrical berries containing numerous seeds surrounded by a sticky gelatinous substance. After blooming the plant stops growing and after quite a long time it dries completely, but in the meantime it has transferred nutrients to the new plants produced at the base.

It reproduces by seed, placed superficially on an organic loam with addition of coarse siliceous sand per a 30-40 % maintained humid at the temperature of 24-26 °C, by division of tufted plants and through the new basal vegetations that can be detached when they have a dimension equal to one third of that of the mother plant. 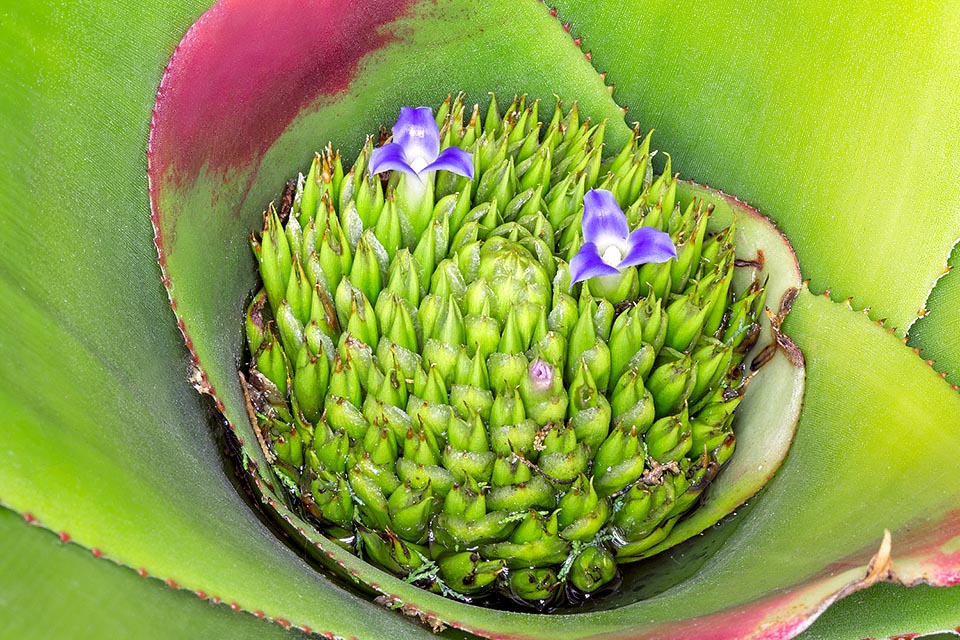 The infundibuliform rosette of leaves spirally arranged allows the water accumulation in a central pit rich of decomposing material. It contributes to the nourishment of the plant and offers food and shelter to several forest animals. The survival of anurans like Scinax littoreus and Xenophyla truncata is strictly linked to this species © G. Mazza

This species of large dimensions is amply diffused in the origin area where it carries on an important ecologic rôle, the base of the leaves and even more the central cavity, collect water and animal and vegetal debris that besides contributing to the nourishment of the plant, form a micro-environment offering food and a place where to shelter and reproduce for numerous vertebrates and invertebrates.

Among these, numerous species of anurans, such as for instance the Scinax littoreus (Peixoto, 1988) and the Xenohyla truncata (Izecksohn, 1959) whose survival is strictly connected with this species.

In nature it grows in the shade of the under-wood of the pluvial forest as well as exposed to the sun in sandy dunes next to the sea characterized by mainly xerophilous vegetation. This renders it easily adaptable to different conditions of cultivation, from the sunny gardens of desert type, ensuring the constant presence of non calcareous water in the central cavity, to the luminous inner spaces.

The diversity of environment has repercussions on form and colour, the plants in full sun are more compact, with shorter and wider leaves, of colour paler than those in shade, brighter dot at the apex and more robust thorns on the margins. 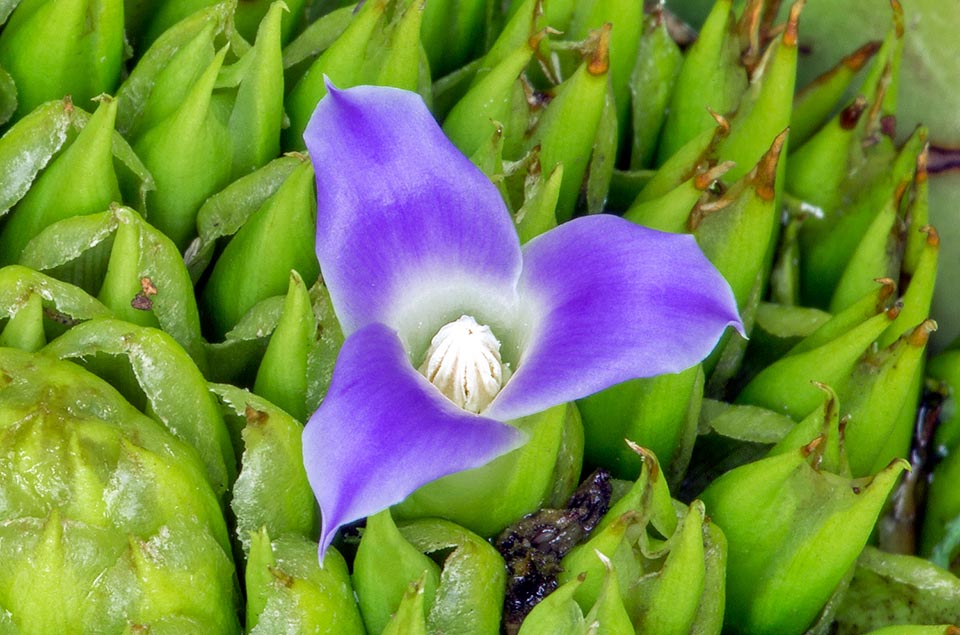 The inflorescence, on a short scape at the centre of the rosette, has purple flowers with 3 petals united at the base, white below © Giuseppe Mazza

Varieties have been selected, very appreciated, with pink, bronze or red leaves. Concerning the behaviour at the low temperatures it does not stand among the most resistant of the genus, being damaged at temperatures a little under the 0 °C. Where the climate does not allow the cultivation in open air, it may be grown in pot, utilizing a porous and draining substratum that can be formed by vegetal loam and medium sliced bark of pine in equal parts, placed in luminous environment, for a more intense colouration.

It needs high temperatures with lowest minimal ones preferably over the 16 °C, and non calcareous or rainy water in the central cavity, to be frequently renewed, except when in presence of low temperatures when it is preferable to keep it almost dry to avoid rottenness.