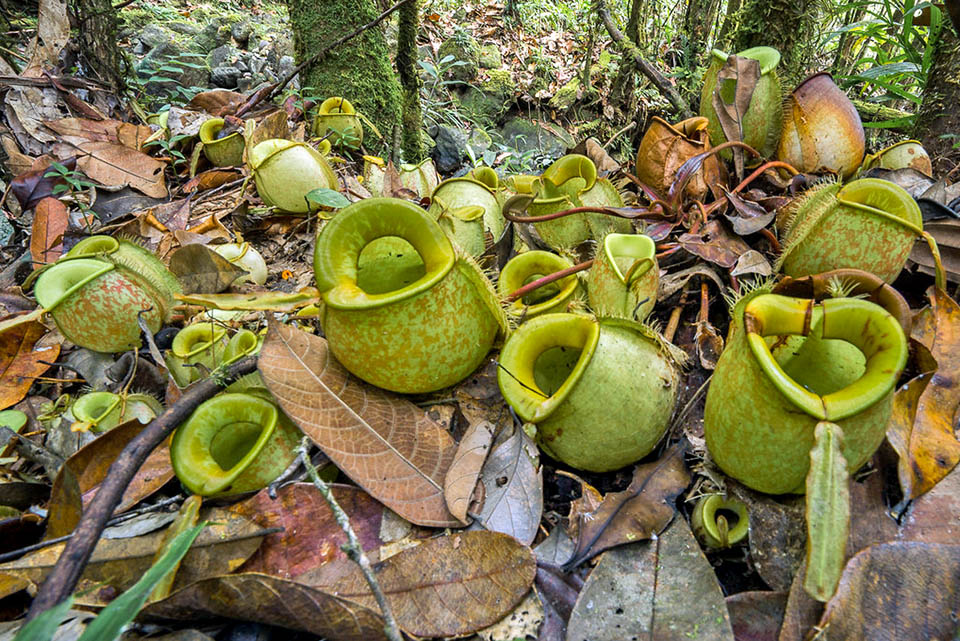 The name Nepenthes comes from the old Greek νηπενθής, nipenthos, formed by the negative prefix νη, nê, “non”, and the name πένθος, penthos” sadness, pain”. This term was used by Homer, in the fourth book of the Odyssey, to indicate the drink “nepenthes pharmakon” that Helen, secretly, has poured in the wine that Telemachus, son of Odysseus, and Menelaus, prince of Mycenae and her husband, were drinking in order to alleviate, thanks to its effect of cancelling the memories, the pain and the nostalgy caused by the distance from their native country.

Linnaeus in his opus “Species Plantarum, 1753” called Nepenthes distillatoria L. a plant coming from Sri Lanka imagining that the view of this wonder of Nature, after a long voyage, would make people forget the efforts made to find it.

The specific epithet comes from Latin “ampulla”, flask, and refers to the urceolate shape of the ascidium.

It is a climbing terrestrial plant with a stem of pale brown colour, cylindrical (1-1,5 cm), with long internodes (1,5-7 cm) and that may stretch up to 15 m of height. 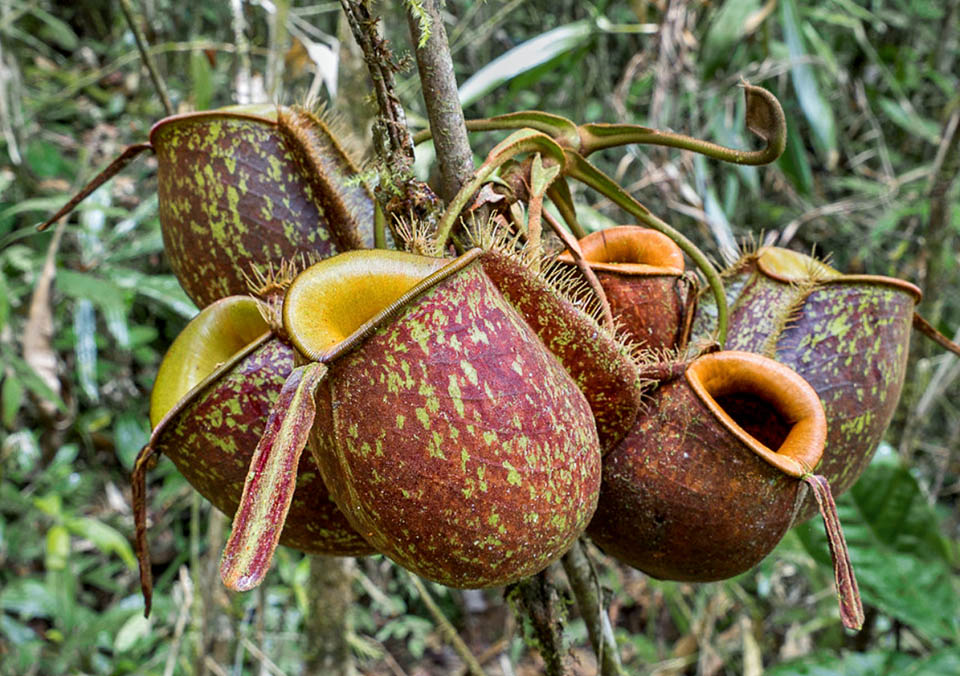 Superior ascidia. They are smaller, but host they too mosquito larvae, tadpoles of batrachians and bacteria to ease in mutual relationship the decomposition of the contents © Tom Ballinger

Nepenthes ampullaria, due to its particular posture, is a species that cannot be mistaken with any other. In fact, it is characterized by numerous ascidia arranged in basal rosettes, among the leaves of the litter or in the moss of the soil, and by climbing stems, usually with few ascidia on top, at times, merged in rosettes up to about 2 m from the soil.

It is a semi-detritivorous plant living in the humid and shady jungles at an altitude between the sea level up to 2100 m.

The leaves are pale green and, if under the litter, yellow-pale pink.

They are sessile or with short petiole, up to 25 cm long and about 6 cm broad, reduced, in the basal rosette, to nanophyllous (2-5 cm per 0,5 cm). The lamina is entire, coriaceous, lanceolate to spatulate, with sharp apex and attenuated base that embraces the stem per one half of its circumference. The veins, almost at the margin, are in the number of 3-5 per side.

Usually, the ascidia are green mottled with brown, at times yellow with pink spots, at times red in Borneo and New Guinea, very sought for commercially. 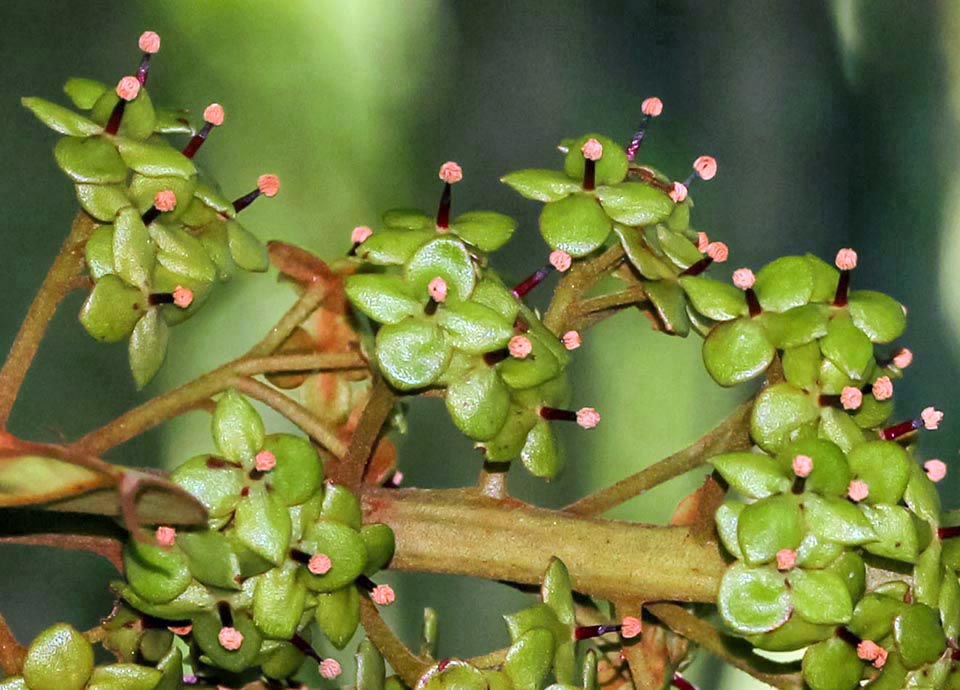 The inferior ascidia (10 x 9 cm) have a carpet arrangement for facilitating the catch of the debris (leaves and other) that fall from the top of the trees. Their shape is urceolate, that resembles a small jar, semicircular on the dorsal side, ventrally flat with two fringed wings broad up to 1,5 cm and with tendrils as long as the ascidia. Opening is oval with mainly monocomour peristome, rarely spotted or streaked, flat, up to1,5 cm broad and strongly tilted inwards.

Are absent the areas of production of the waxy substances, that serve to make the prey slide, to allow the regions of the digestive glands to extend almost up the peristome. The cover is reduced, oblanceolate, with rounded apex and cuneate base, and with scattered nectariferous glands, at times absent. The spur is simple or ramified, up to about 10 mm long.

The superior ascidia are usually little developed, rudimentary, widely infundibuliform (2 x 2 cm) with tendrils longer than those of the basal rosettes.

The ascidia of Nepenthes ampullaria are long-lived, last more than eight months, because adapted to the slow absorption of ammonium (NH4+) obtained from the slow degradation of vegetal materials done by insects (mosquito larvae) and by commensal microbes (bacteria). 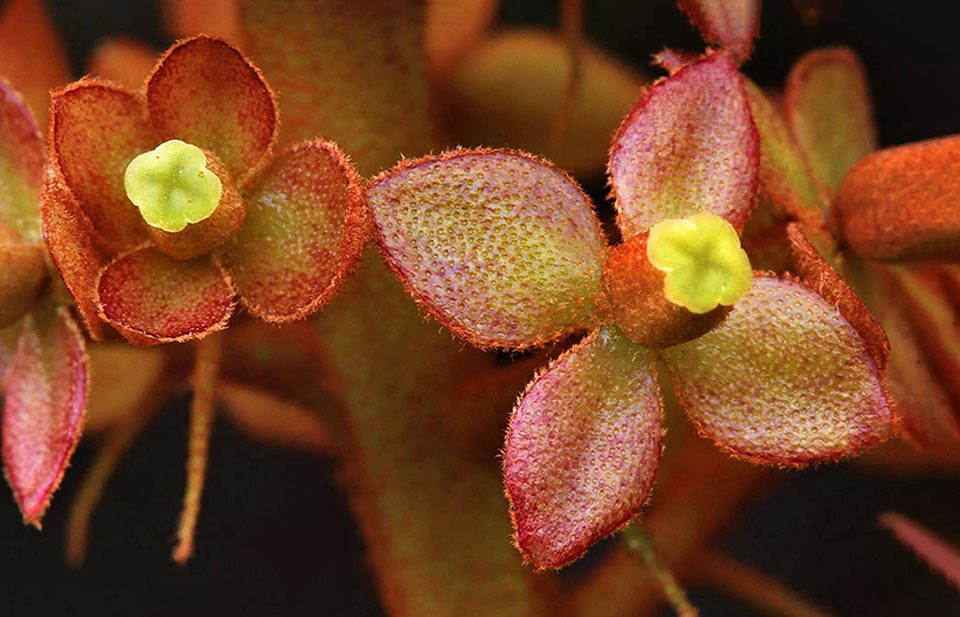 It is, therefore, a partially detritivorous plant with less acidic ascidia for hosting these organisms, some in mutual relationship. The infauna (larvae of mosquito and bacteria) receives, in fact, protection and food from the plant, whilst this benefits from the products of their digestion.

The ascidia, full of water, can host tadpoles of various ages of the frog Microhyla borneensis Parker (1928) that spends there the most of its vital cycle. This environment is shared also by the crab spider Misumenops nepenthicola (Pocock, 1898) living inside the ascidia in a thin silk knit, in order not to slip inside, and trap flies and other insects. After making liquid, with various enzymes, the internal parts of the prey, releases the carrions that fall to the bottom of the ascidium to be completely decomposed and absorbed.

The flowers of Nepenthes ampullaria, unisexual on different plants, are merged in panicle-like ramified inflorescences with green to yellow tepals.

The male inflorescence is rather dense, cylindrical or almost conical, 6 to 30 (40) cm long and (2) 4 to 5 (6) mm broad, on a 2,5 cm long with leafy, spatulate bracts. The flowers are supported by secondary peduncles. 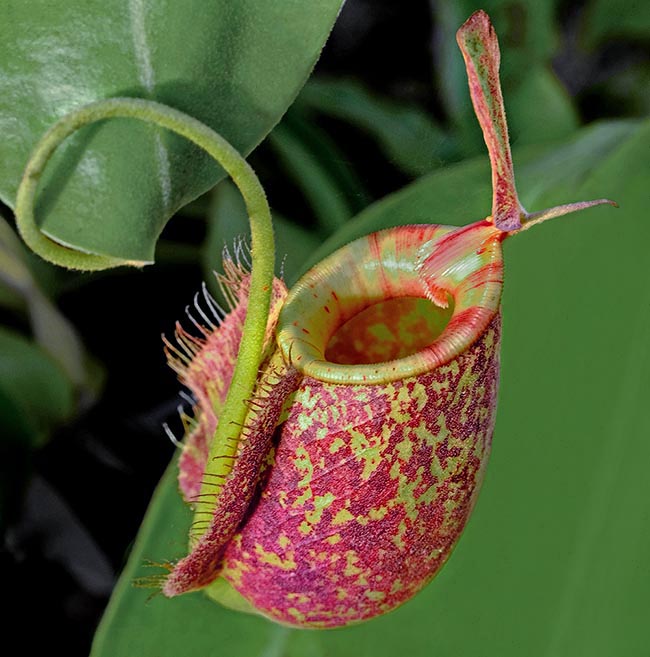 Nepenthes x hookeriana superior ascidium. This natural hybrid, diffused in Malaysia, Sumatra and Borneo, comes from the cross of Nepenthes ampullaria with Nepenthes rafflesiana. The resulting violet mottled red, present on the ascidium, and the carnivorous food habits are characteristics typical to Nepenthes rafflesiana © Peter Zeller

The inflorescence has the inferior peduncles fasciculate at the apex, 8-12 (-5O) cm, flowers that progressively reduce in the upper portion. The male flowers have oval tepals, 4 to 6 mm long and stamens with merged, reddish filaments, and with the brown anthers (2 per 1,5 mm) that exceed the perigone. The female flowers have greenish tepals, oblong-elliptic, pale green stigma and sessile ovary, reddish at times. The female inflorescence is like the male one, but is usually shorter, with less flowers and little ramified.

The fruit is 18-30 mm long, with strictly lanceolate valves, 2 to 3,5 mm broad at the centre, and gradually reducing towards the two extremities.

The seeds are filiform, about 10-15 mm long, slightly rugose.

In the young parts the plant is pubescent with stellate hairs mixed with others, loger, partly ramified, of red or brown colour. On the adult tissues the hairs are often deciduous, excluding the inflorescences that maintain them. The hairs, stellate and whitish, deciduous, are present on the lower paginae of the leaves and also on the inner surface of the flower.

Nepenthes ampullaria blooms once or twice a year and as the flowers persist for many weeks, their presence can often coincide with that of other species of Nepenthes and consequently natural hybrids may take form.

Nepenthes × trichocarpa Miq. is another hybrid that lives in the plains of peninsular Malaysia, Borneo, Singapore and Sumatra, usually together with its parent species: Nepenthes ampullaria and Nepenthes gracilis Korth.

Nepenthes ampullaria is very utilized in the traditional medicine of South-East Asia because of the liquid contained in the ascidia that is administered to regulate the menstrual cycle, facilitate the delivery, relieve asthma, treat eyes inflammation. In the past, in Malaysia a decoction of the stems was used to treat malaria. The local populations used the flexible stems of Nepenthes ampullaria as ropes and its basal ascidia for cooking the rice to which they give a particular very appetizing flavour. 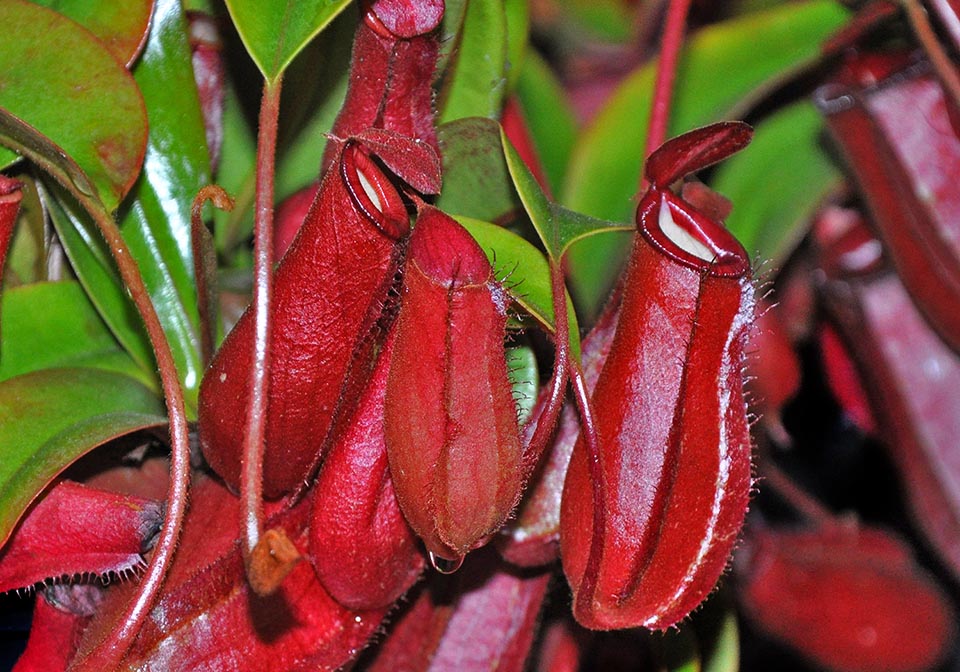 Nepenthes ampullaria is a very popular plant in cultivation. Being a species used to hot and very humid temperatures, during the night as well as during the day, (species lowland) requires a terrarium that must recreate the conditions of the zones of the tropical plain with very high humidities (70%-80%) and constant temperatures by day and night, usually 25-28 °C.

For its growth the plant requires an always humid peat to be watered from above and without saucers to avoid water stagnation. Like all carnivores usually does not require fertilization, at most we can use, now and then, a small dose of fertilizer based on ox blood. It loves the bright light but not the direct sun rays if not for a few hours. It can reproduce by seed and, in spring, by cutting. The repotting, being the plant in continuous vegetation, can be done only if strictly necessary, provided there are no damages to the rooting apparatus and to the basal ascidia. As substratum we can use peat, pine bark, sand and perlite with a cover of moss or coconut fibres, bark of pine and acid peat of sphagnum. The live sphagnum is good for increasing the humidity around the plant.

The cultivar Nepenthes ‘Bloody Mary’ can grow up until it becomes a very bushy plant. It is a quite beautiful hybrid with small red, stocky, small ascidia on green, bright leaves, obtained between Nepenthes ventricosa and Nepenthes ampullaria.

Nepenthes ampullaria was last modified: May 22nd, 2022 by Peppino