Nepenthes aristolochioides Jebb & Cheek (1997) is a carnivorous plant of the family Nepenthaceae endemic to the island of Sumatra (Indonesia), where is found on the Mount Kerinci and on the Mount Tujuh, at altitudes between 2.000 and 2.400 m above the sea level.

The plant climbs up shrubs and small trees and is found in the sites covered with moss.

This plant was collected on August 5th, 1956 by the Dutch botanist and collector Willem Meijer (1923-2003) on the Mount Tujuh (Jambi) at an altitude of 2000 m and conserved in the Netherlands National Herbarium of the University of Leyden as reference example called holotype.

However, the position of the opening of the ascidium and of the relevant ring surrounding the entrance (peristome) was deemed for long to be an artifact of the process of desiccation until when two German botanista, Joachim Nerz and Katrin Hinderhofer, to be certain, in 1996, have gone to Sumatra for viewing the plant in nature confirming the particular opening of the ascidium.

The name Nepenthes aristolochioides was utilized informally since 1994 but was made official in the scientific world by Matthew Jebb and Martin Cheek in their treatise “A skeletal revision of Nepenthes (Nepenthaceae)”, published in 1997 by the botanic magazine Blumea.

The name Nepenthes comes from the old Greek “νηπενθής” (nipenthos), formed by the negative prefix “νη”, (nê), and the name “πένθος” (penthos) that means sadness, pain.

This term was used by Homer, in the fourth book of Odyssey, to indicate the beverage “Nepenthes pharmakon” that Helen, in secret, has poured in the wine that Telemachus, son of Ulysses, and Menelaus, prince of Myceane and her husband, were drinking with the purpose of alleviating, thanks to its effect of erasing memories, the pain and the nostalgia for the distance from their native country.

Linnaeus in his opus “Species Plantarum, 1753” called Nepenthes distillatoria L. a plant coming from Sri Lanka thinking that the view of this wonder of Nature, after such a long voyage, should have made them forget the hard work done for finding it. 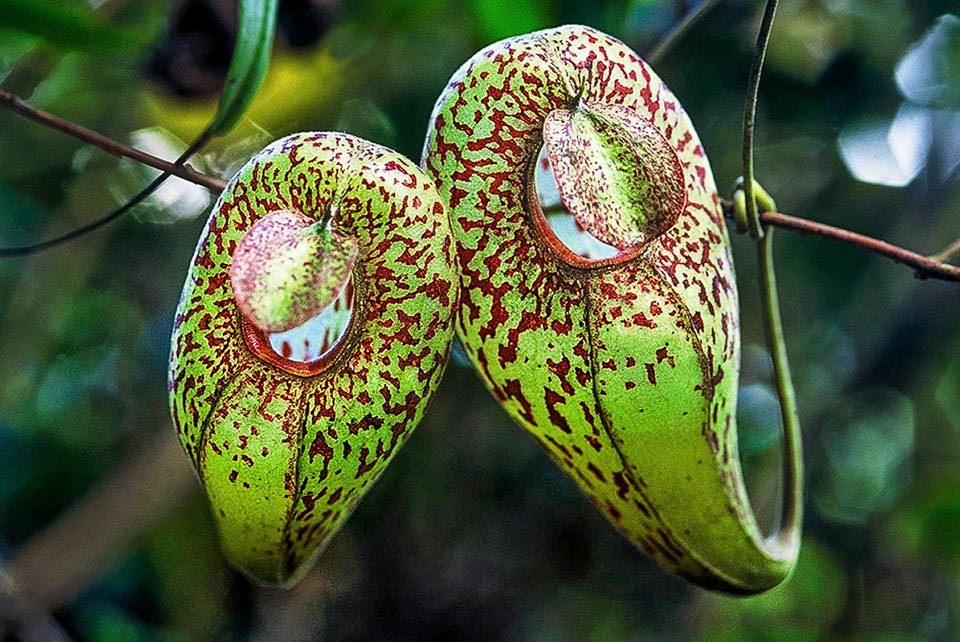 The name of the specific epithet aristolochioides comes from “oides”, from the Latin, “similar” to the flower of Aristolochia, a genus of plants that includes more than 500 species distributed all over the world, some of them very ornamental because of their flowers.

Nepenthes aristolochioides is a climbing plant, terricolous, that may reach the height of 8 m. The stem has a circular section, tapered towards the apex, with 0,2-0,5 cm of diametre and 5,5-13 cm long several internodes, with numerous axillary buds located at 1,5-7 mm over the node.

The leaves are coriaceous and sessile. Those of the basal stems may reach 15 x 2,5 cm and vary from strictly lanceolate to lanceolate-spatulate with apex usually sharp and foliar base with rounded wings.

The leaves of climbing stems (7,5-15 x 1-3 cm) are like the lower ones but have no wings and with the base that normally wraps the stem for 1/3-1/2 of its circumference.

The plant has short white hairs, irregularly ramified or simple, up to 0,2 mm long. They are located at the axil of the leaves, on the central vein, on the ascidium around the peristome and on the cover.

The ascidia originate from the extremity of the tendrils. The lower ones form before that the plant begins to climb. They are big (7 cm x 3 cm, more at times) and shaped like a bladder with lateral and not apical opening. They have a pair of wings (<9 mm wide) that go down along the fore part. The wings have up to 10 mm long fringed elements. The opening is orbicular to ovate, up to 4 cm of diametre. The inner surface of the ascidium is provided with digestive glands (0,2-0,3 mm) and may have none of them in the higher parts. In this species there is no waxy zone.

Externally the peristome is rounded, up to 1,5 mm wide, internally flattened, with veins up to 0,5 mm spaced, with inner margin formed by small teeth and with nectariferous glands between the ribs to attract the preys.

The upper ascidia, like the lower ones, are shaped like a bladder (utriculate), infundibular at the base, obovoid up, usually they measure 9 x 3,5 cm and have no wings. 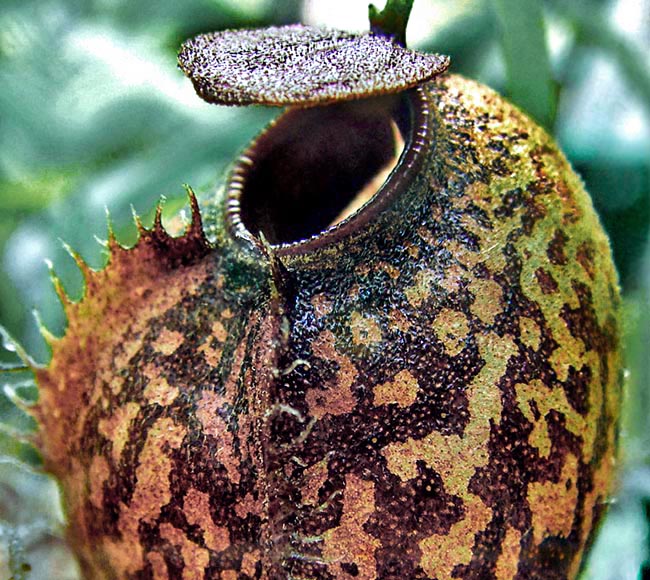 The colour of the ascidia is green with red-brown streaks, thicker towards the opening peristome included. The spur is simple, about 9-10 mm long, and with the apex having 2-4 sharp points. The cover is elliptical or sub-orbicular, with usually rounded apex and with slightly cordate base up to 4 cm long and 3 broad and having no appendage. The cover is oriented in a way to prevent the light from reaching the opening and has the lower side of dark red colour, almost brown, to darken the opening.

The hairs on the outer wall of the opening offer a point of support to the preys that, thanks to the inner transparency in the upper part (dome) of the ascidium, due to the thin wall (about 30% less than the the fore wall) and for the absence of pigmentation are encouraged to enter inside rather than turning towards the opening.

The winged insects hit this inner part of the ascidium that, due to its bending, are pushed downwards drowning in the digestive liquid. The crawling insects enter the opening and in the attempt of reaching the luminous back they fall from the peristome and they too drown into the liquid.

Nepenthes aristolochioides has a racemose inflorescence, the male one is up to 30 cm long whilst the female one, is usually shorter. The floral peduncles bear only one flower, and the basal ones are up to 12 mm long, whilst the higher ones are shorter (about 6 mm).

The tepals are oval, up to 4 mm long. The fruits measure, usually, 20 mm x 4 mm. The seeds are filiform.

Nepenthes aristolochioides is a very vulnerable species considered by the IUCN Red List as a species in critical danger of extinction (Critically Endangered). The reason for its possible extinction stands in the pervasive poaching, even if the species is found exclusively inside the Kerinci Seblat National Park.

It is therefore necessary to protect the habitat from the fires and prevent its illegal pillage to ensure the future survival of this extraordinary plant. At the present stage all species of Nepenthes in Indonesia are protected by the law no. 5 of 1990, PP no. 7 of 1999 and PP no. 8 of 1999.

Of this species is known only one natural hybrid Nepenthes aristolochioides x Nepenthes singalana found in the thick mossy forest on two crests of the Tujuh mountain. This hybrid has ascidia rarely exceeding 5 cm of height. The upper ones are infundibular in the lower part, ovoid in the centre and cylindrical in the upper parts. It distinguishes from Nepenthes aristolochioides due to the cylindrical and narrow peristome and the opening, oblique and not vertical. Having no waxy zone, the inner walls of the ascidium are covered by a thick and syrupy liquid that acts as a trap like a flypaper.

The species is very ornamental because of the unusual shape of the ascidium with lateral opening that renders it particularly popular. While the collection in nature is not recommended, it is possible to reproduce it with sustainable mechanisms such as seeds or cuttings of cultivated plants.

For its cultivation we must keep in mind that it is a mountain (highland) species. Therefore, it needs conditions found in the tropical mountains, temperature not over the 30 °C during the day and a thermal jumping of about 15 °C during the night.

It prefers very bright light, but not direct sun. Moreover, it is advisable that the humidity is always high, usually 70% – 90% or more, but we must avoid that the soil is impregnated with water as this would cause root rot.

The soil can be a mixture of moss, fern and coconut fibre, perlite and pumice rock. The water to be used is the rain, distilled or demineralized by ion exchange, water.