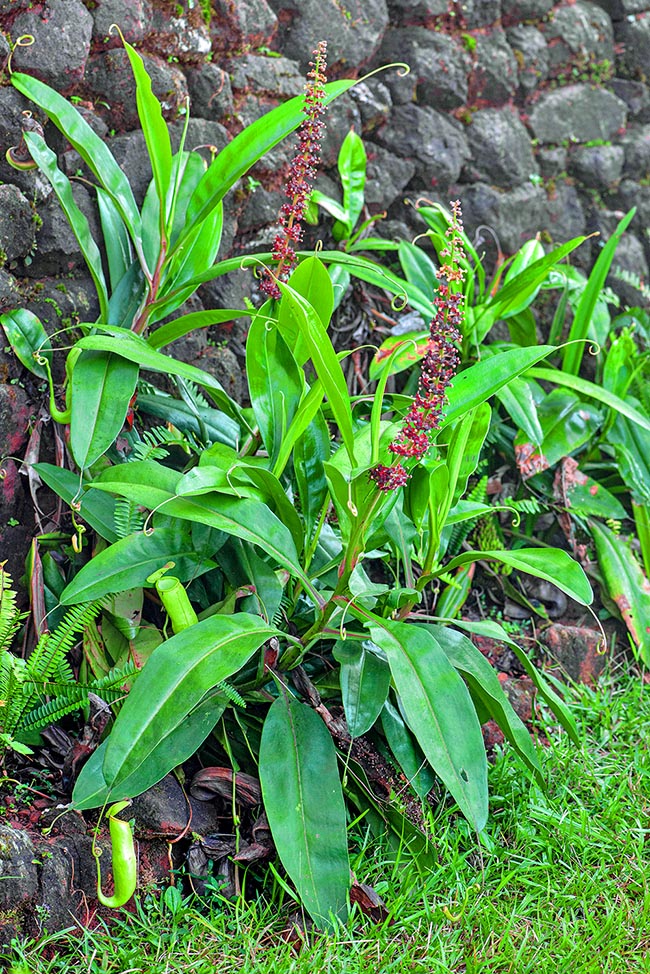 Nepenthes khasiana Hook.f. (1873) is a carnivorous plant belonging to the family Nepenthaceae, present all over the State of Meghalaya (north-eastern India).

This species has a very localized distribution and is rare in nature.

It is found in the humid and subhumid and humid subtropical zones of the highlands, from 1000 to about 1500 m of altitude, of the Khasi, Jaintia and Garo Hills, of the Patkai range mountains, one of the south-eastern Himalayan spurs. In these locations the plant grows luxuriantly on the forest soil, in open sites and on the hilly slopes covering an area estimated in 250 square kilometres.

Presently, the various human activities, such as construction of roads, agriculture, deforestation, fires, coal mining and cattle and goats grazing, stand among the causes of destruction of the natural habitats of this important endemism.

During the last few decades, many populations have been destroyed even due to the indiscriminate collection, for medicinal uses as well as for collections.

The IUCN Red List has classified this species as at high risk of extinction in nature (Endangered, EN).

It has also been inserted in the CITES Appendix I and in the Indian government listing banning the exports. In order to partially contain this destruction, Nepenthes khasiana is cultivated, maintained and conserved in the National Orchidarium and Experimental Garden Botanical Survey of India,Yercaud, Tamil Nadu.

The name Nepenthes comes from the old Greek νηπενθής, nipenthos, formed by the negative prefix νη, nê, “non”, and the name πένθος, penthos “sadness, pain”. This term was used by Homer, in the fourth book of the Odyssey, to indicate the beverage “Nepenthes pharmakon” that Helen, secretly, has poured into the wine Telemachus, son of Odysseus, and Menelaus, prince of Mycenae and her husband, were drinking in order to soothe, thanks to its effect of cancelling the memories, the pain and the nostalgia for their being far away from their native country.

Linnaeus, in his opus “Species Plantarum, 1753,” called Nepenthes distillatoria L. a plant coming from Sri Lanka supposing that the view of this magnificence of Nature, after a long voyage, would make people forget the hardships for finding it. 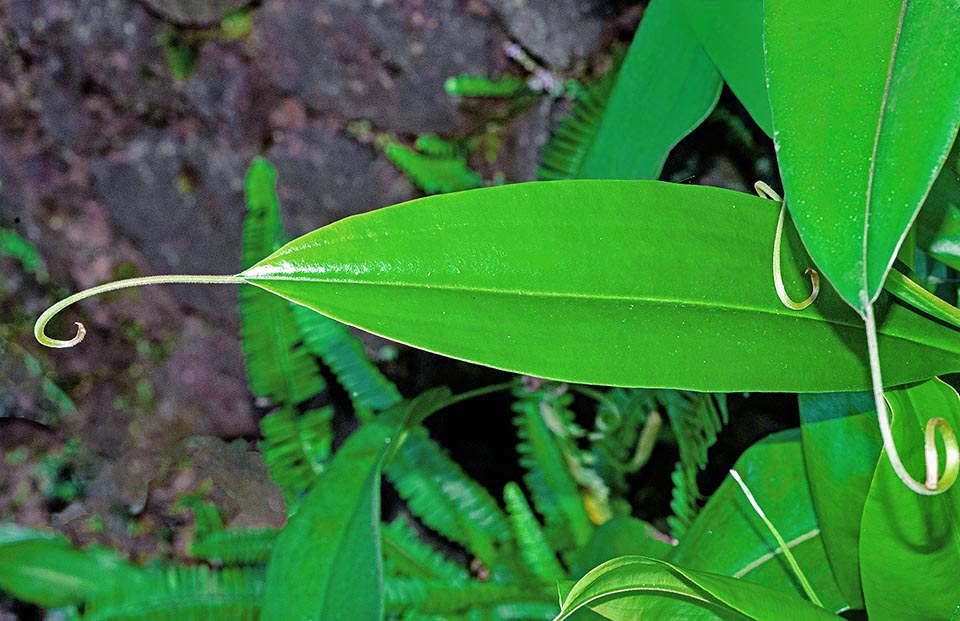 Leaf with cirrus. Shrubby plant, dioecious, erect, prostrate or ascending, can climb on the branches of various species up to 4-12 m of height © Vijay Anand Ismavel

The specific epithet khasiana refers to the Khasi mountains where it has been discovered.

The plants of Nepenthes are commonly known as pitcher plants or monkey broccas but Nepenthes khasiana is locally called “Ksete-phare” by the Jaintias, “Memang koksi” (basket of the phantom or of the devil) by the Garo, “Tiew-rakot” (devouring plant) by the Khasi and “Gatapatri” in Bengali.

It is a shrubby plant, dioecious, erect, procumbent or ascendant, up to 4-(12) m, climbing. The leaves are alternate, formed by a basal lamina with median vein forming at the apex an ascidium shaped like a cup. The lamina, sessile or with a sub-amplexicaul peduncle, is elliptic or lanceolate, 20-50 x 3-10 cm, and narrows at both ends. The upper surface of the leaf is often dark green, whilst the lower surface is clear. The stem, the median vein and the cirri may be green, yellow, orange or red, especially if exposed to the direct light of the sun. 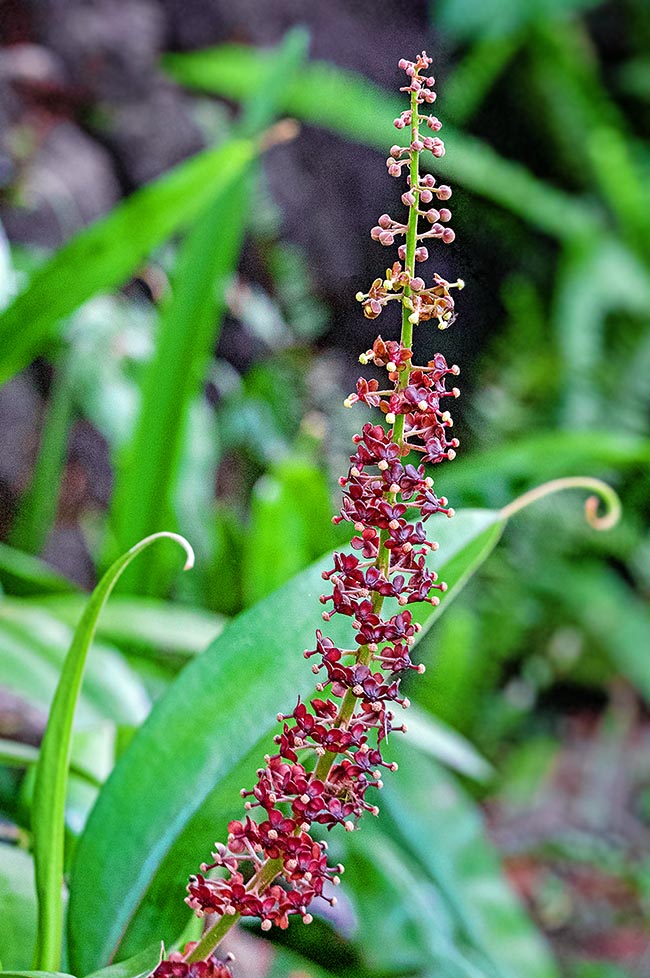 Male inflorescence. It may reach even the length of 60 cm, with actinomorphic nectariferous flowers of 8 mm of diametre grouped in a panicle. The stamens have 2-24 filaments merged in a column and bilocular anthers © Vijay Anand Ismavel

Short hairs can be found mainly on the median vein, on those of the lower pagina, on the tendrils and on the ascidia under development. Also on the oldest parts of the plant can be found simple to strongly ramified hairs.

The lowest ascidia are 12 (15-29) cm tall and 4,5 (7) cm broad. The lowest part of the ascidium is ovate and slightly swollen whilst over, the ascidium gets narrower and assumes a cylindrical shape.

The wings run along the anterior portion of the ascidium, are up to 1,2 cm broad and can be covered by tight, up to 5 mm long, filaments.

The peristome, the tissue ring surrounding the opening of the ascidium, is cylindrical, up to 5 mm broad, with a constant breadth around the opening. Normally, it is glossy, covered by thin, up to 0,5 mm tall veins, spaced up to 0,5 mm each other, at times hardly distinguishable.

The cover is elliptical or suborbicular, often with a cordate base, up to 4,5 cm long and 5 cm broad. The spur is not ramified and measures up to 6 mm.

The lowest ascidia show up outside with a yellowish green colour, occasionally pink, orange, at times are mottled with weak red or orange dots. The interior is yellow, orange or pink and the peristome can be yellow, green, orange, pink or red. The cover, with an almost circular (ovate-suborbicular) outline, has the same colour as the ascidium but may be red in the lowest portion.

The highest ascidia are up to 21 cm long and 5 cm broad. The basal portion, infundibular and swollen, gets narrower under the peristome. The wings are reduced to tight crests that go down along the flattened anterior face of the ascidia and at tiles are difficult to be noted. Outside, under the peristome, is at times visible a reddish band, a few millimetres broad, covered by short hairs. The colour of the upper ascidia is like that of the inferior ones.

The insects are attracted by the very coloured ascidia and by the smell of the nectar that is emitted by the glands located at the entrance to the ascidium and by the lowest surface of the cover. It has also been discovered that the peristome, to better attract the prey, emits a blue fluorescence.

The ascidia contain an abundant quantity of liquid, and their inner walls are very slippery. Once inside, the insect cannot go up again due to the presence of wax on the inner surface that detaches while the insect tries to go up until when it does fall inside. The moving of the insect in the liquid stimulates the glands to release sour fluids and proteolytic enzymes for its digestion to take place with the reduction of the proteins in molecular fragments small enough for being absorbed. 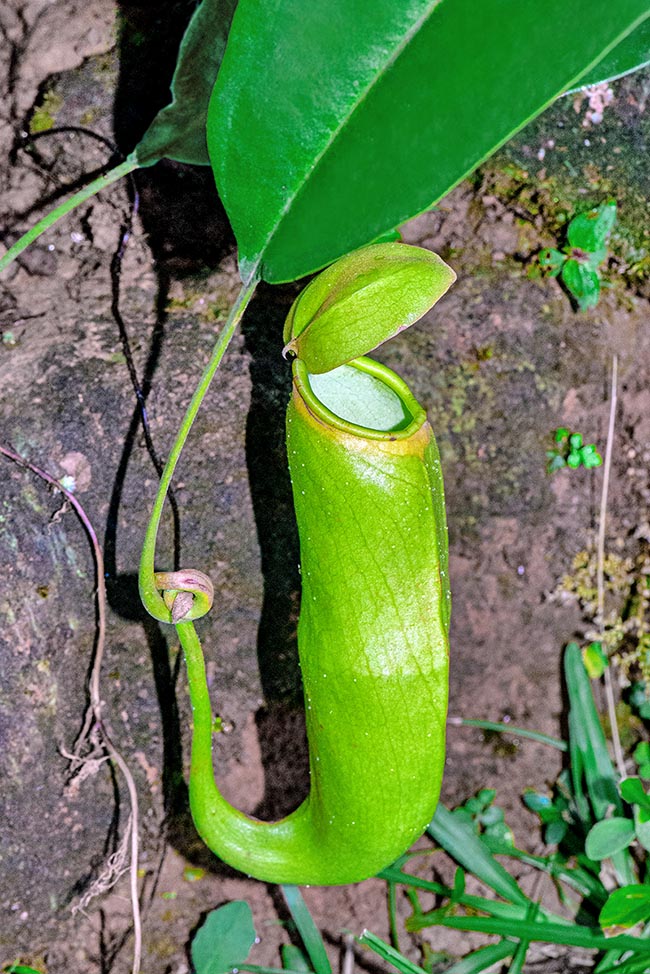 The superior ascidia are up to 21 cm long and 5 cm broad. The peristome emits a blue fluorescence to also attract night insects. They slip into the well and moving they stimulate the plant digestive juices © Vijay Anand Ismavel

This is how the plant gets the nitrogen necessary for its growth.

The inflorescences have up to 0,3 mm long hairs and are usually ramified.

The flowers are actinomorphic, red greenish, of about 8 mm of diametre. The tepals, nectariferous, are 3-4, pubescent externally, and glabrous inside.

The male flowers have the stamens with 2-24 filaments merged in column and bilocular anthers.

The female flowers have 3-4 carpels, pubescent ovary, superior, with numerous ovules and style with discoid stigma.

Flowering begins in June and with the fruits ripening continues until October.

Nepenthes khasiana is a rare plant and for such reason is of great interest for collectors.

Furthermore, the variation of colour of the ascidia and the elegant inflorescences, render it very ornamental with a high commercial potential.

Being a carnivorous plant, for the growth requires soils poor in nutrients and consequently acidic. It can be employed, in fact, only in open air gardens such as swamps and lands subject to brooks. Whilst, as pot plant is more diffused, in suspended baskets or in terraria that are excellent containers at controlled temperature.

Nepenthes khasiana can be propagated by seed germination or vegetative by cutting of the stem. For generating a huge number of plants is adopted the multiplication in vitro utilizing the nodal tissues of the stem.

The inhabitants of the tribes Garo, Khasi and Jaintia exploit Nepenthes khasiana as a medicinal plant that becomes an income source for their basic needs. The tribes Khasi and Garo utilize the liquid of the closed ascidium as eye drops for cataracts and for night blindness, but also in the treatment of stomach problems, diabetes, earache and diseases of the female reproductive system. The plant is also used for treating diabetes. Roots and ascidia in powder form are applied on the skin for treating its dysfunctions. The ascidia, with the inner liquids and the insects, crushed, are administered to the patients for treating cholera. Yore, the dough of ascidia, together with its contents, was used for curing leprosy.