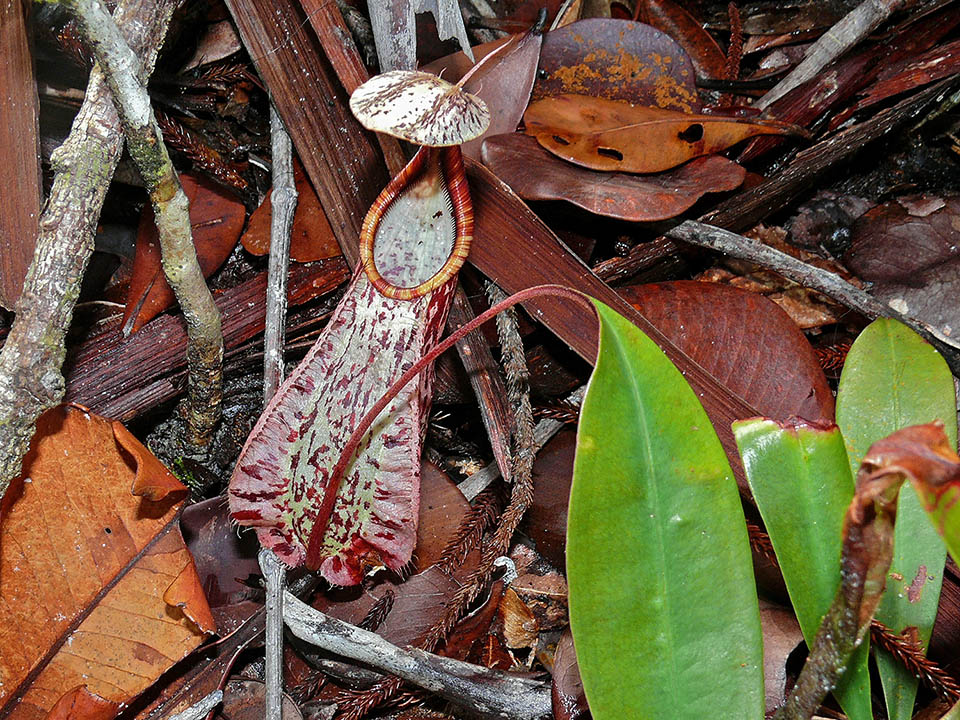 Nepenthes rafflesiana Jack (1835) is a carnivorous plant of the family Nepenthaceae diffused in Borneo, Sumatra, Peninsular Malaysia and Singapore. In more detail, it is common in Borneo and in the Riau Archipelago, but has a distribution limited in Peninsular Malaysia and Sumatra where it has been found only between Indrapura and Barus. Besides Singapore, it has been found on a certain number of lesser islands, among which are Bangka, Labuan, Natuna and the Lingga Islands.

It is present in the Sundaland heath forest, known also as Kerangas forest, in the secondary formations, in the margins of the forest of swamps of peat and on the sea cliffs. It grows at altitudes going from the sea level up to 1200 m, at times up to 1500 m of altitude.

Nepenthes rafflesiana is very variable with numerous forms and varieties found and described even if not all are judged valid. In isolated sites of north-western and western Borneo, stand specimens significatively bigger than elsewhere. 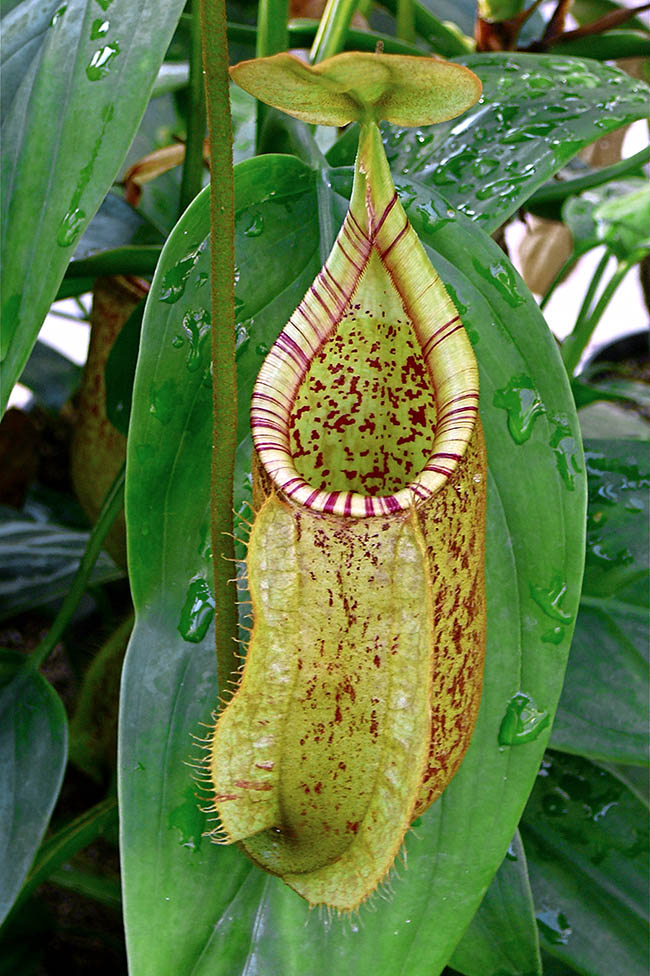 The upper ascidium, narrow at the base, is even 30 cm tall and 9 broad. It usually predates dipterans, coleopterans, grasshoppers, beetles, big ants and lepidopterans. When the plant has little nitrogen they turn red © Robert Combes

In 2014 it was reported by the International Union for Conservation of Nature (IUCN) as a species at very low risk (Least Concern, LC) of extinction.

It is listed in the Appendix II of CITES (Convention on the International Trade of Endangered Species) for the international trade of animal and wild vegetable species as not necessarily under threat of extinction, but with risk to become as such if excessively traded.

The name of the genus Nepenthes comes from the old Greek “νηπενθής” (nipenthos), formed by the negative prefix “νη” (nê), = non, and the name “πένθος”(penthos) = sadness, pain. Adjective used by Homer to indicate the beverage “Nepenthes pharmakon” Helen, secretly, has poured into the wine Telemachus, son of Odysseus, and Menelaus, prince of Mycenae and her husband, were drinking in order to soothe, thanks to its effect of erasing the memories, the pain and the nostalgy for the distance from their birth country.

Linnaeus in his opus “Species Plantarum, 1753” called Nepenthes distillatoria L. a plant coming from Sri Lanka imagining that the view of this wonder of Nature, after a long voyage, would have made forget the efforts encountered for finding it.

The species, discovered in Singapore by the Scottish William Jack (1795-1822), botanist and physician at the East India Company, wanted to dedicate it to Sir Thomas Stamford Raffles (1781-1826) military and colonial administrator, founder of the city of Singapore, who, during his very long stay in Asia, developed a strong passion for the flora and the fauna of those countries so much to promote, once back home, the foundation in 1826 of the Zoological Society of London, just in time before his death.

In nature, Nepenthes rafflesiana can reach a height of up to 4 m, at times 9 or even more. The young plants are completely covered by long deciduous hairs, white or brown. The mature plants can be wholly glabrous or with a down of short brown hairs.

The stem is thick, long and ramified, when young, covered by a soft deciduous pale green down. The internodes are about 20 cm and the tendrils can be of more than 110 cm. The (7-40 cm) leaves are alternate, lanceolate, with amplexicaul petiole, long, with a wavy edge, and with the median vein supporting the traps (ascidia) for catching the insects.

Usually, there are two types of ascidia. The lower ones grow close to the surface of the soil, at times grouped in rosette, like ampoules, pubescent, 12-20 cm long and 5 cm broad. In the bigger forms they may reach the length of 40 cm. 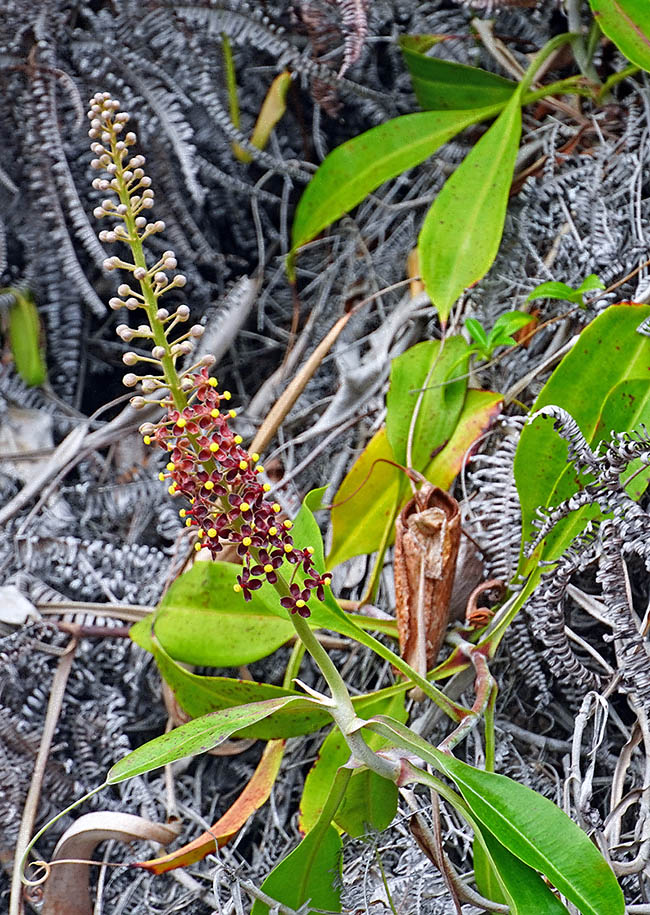 Blooming Nepenthes rafflesiana. Diffused in Borneo, Sumatra, Peninsular Malaysia and Singapore, can climb up to more 9 m of height. Usually grows in open areas, sandy and humid, from the sea level up to 1200-1500 m © Reuben C. J. Lim

The wings are frayed, well developed, and belly usually of green yellowish colour with spots of variable size of purple colour and oblique opening slightly contracted.

The cover prevents the entry of the rainwater inside the ascidium.

The upper ascidia, narrower at the base, have an infundibuliform shape, reaching a length of 30 cm and 9 cm of breadth, often attached to tendrils. They are of green or cream colour or almost completely whiten with reddish brown spots.

The digestive liquid is quite sticky and elastic and prevents the prey from freeing themselves until they drown.

It has been noted that if the plant has no nitrogen and phosphorus, it produces smaller and smaller ascidia but more coloured due to a greater production of anthocyanins.

By colouring artificially, the ascidia of red and green it has been noted that the catch rates of the red ascidia, that form, consequently, under stress conditions, are bigger than those of the green ones because the red colouration is a visual signal that better attracts the insects.

From this we can deduce that the red colouring is an adaptive trait for the carnivorous plants because it increases the overall catch rates of the prey.

This study has evidenced that the red ascidia are more effective because they represent, besides the olfactory signals of the nectars, a visual stimulus that helps in directing the insects, in particular the dipterans, towards the trap.

The attraction, besides the colour and the odours of the glands of the extrafloral nectar, is also done by the peristome that contrasts with the body of the ascidium and gets attractive. This is evident if we observe in the bands of the blue and green ultraviolet light (respectively 350-370, 430-470 and 490-540 nm).

From the analysis of the contents of the upper and lower ascidia it has been noted that the preys differ, this suggests that having two functionally different ascidia could be an evolutionary advantage for catching a wider diversity of species.

Therefore, we deduce that in the upper ascidia the preys are often bigger and consequently have a higher nutritional contents. 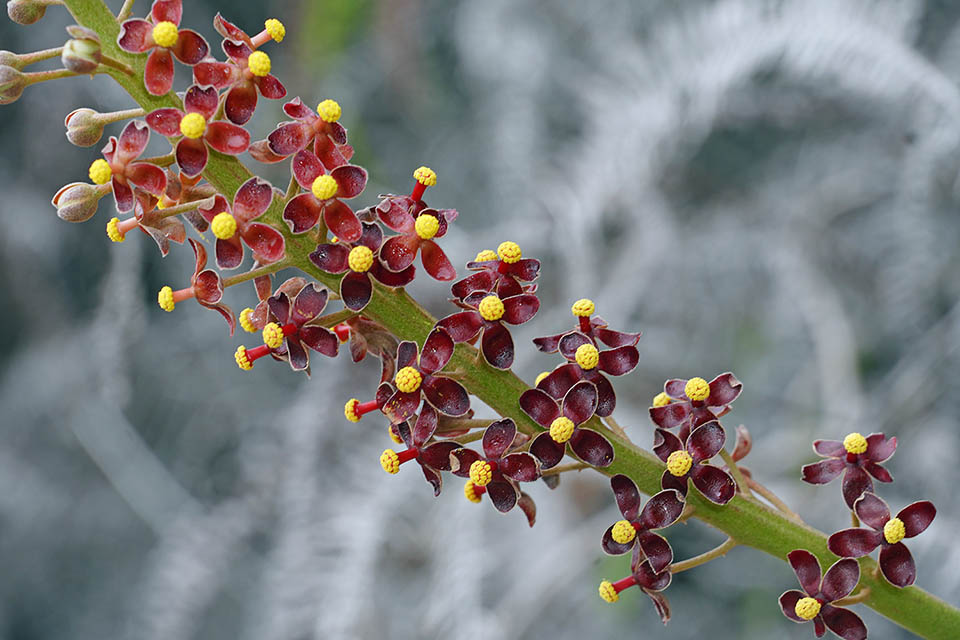 Male inflorescence close-up. The stamens filaments are merged in a column. This species is dioecious, that is there are male plants and female ones © Reuben C. J. Lim

Nepenthes rafflesiana is dioecious, with male and female flowers located on separate plants.

The flowers are grouped in 15 to 50 cm long racemate inflorescences that in the giant plant may reach the length of one metre.

The flowers are regular, up to 1,5 cm of diametre, with the perianth formed by 4 cup-shaped tepals, to contain the nectar, merged at the base, reddish. The male flowers have the stamens with the filaments united in column before yellow then reddish. The anthers are yellow. The female flowers have superior ovary, tetragonal, not ramified style and peltate stigma. The surface of the stigma is pale green for about two weeks then darkens. The ova are numerous in the ovary.

The pollination is done by flies and by night moths. The fruit is a coriaceous dehiscent loculicidal capsule with four valves containing many filiform seeds that are dispersed by the wind.

In Malaysia, the boiled roots of Nepenthes rafflesia were, in the past, transformed into poultice for treating stomach pain and dysentery. Whilst the decoction of the stem was used to relieve fever and cough. 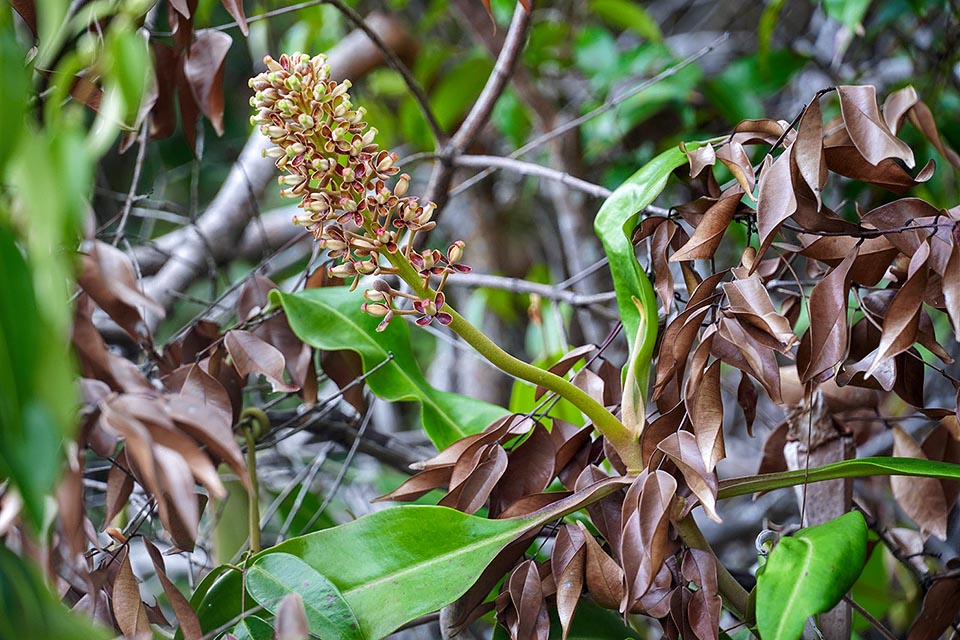 In Borneo the liquid of the still closed ascidia is utilized to hydrate the skin, to soothe the burns, to treat eye inflammation. From the stems can be obtained ropes and handcrafted fabrics.

In the Philippines the ascidia are used as containers for drinking, cooking and transporting water.

Yore, in the Malay community, they resorted to shamans, called Bomoh, practitioners of the traditional medicine having supernatural powers. The ascidia of Nepenthes rafflesiana were used for healing, exorcising and also for propitiating rain.

Nepenthes rafflesiana is a plant very diffused in cultivation.

It can reproduce by seed and by cutting. It is a little demanding plant and of easy cultivation. It is a lowland species and requires a terrarium that will have to recreate the conditions of the zones of the tropical plain with very high humidity (between 70% and 80%) and constant temperatures during the day as well as during the night, usually 25-28 °C. The plant must be exposed to light, even with some direct sun, but in the morning or in the afternoon. 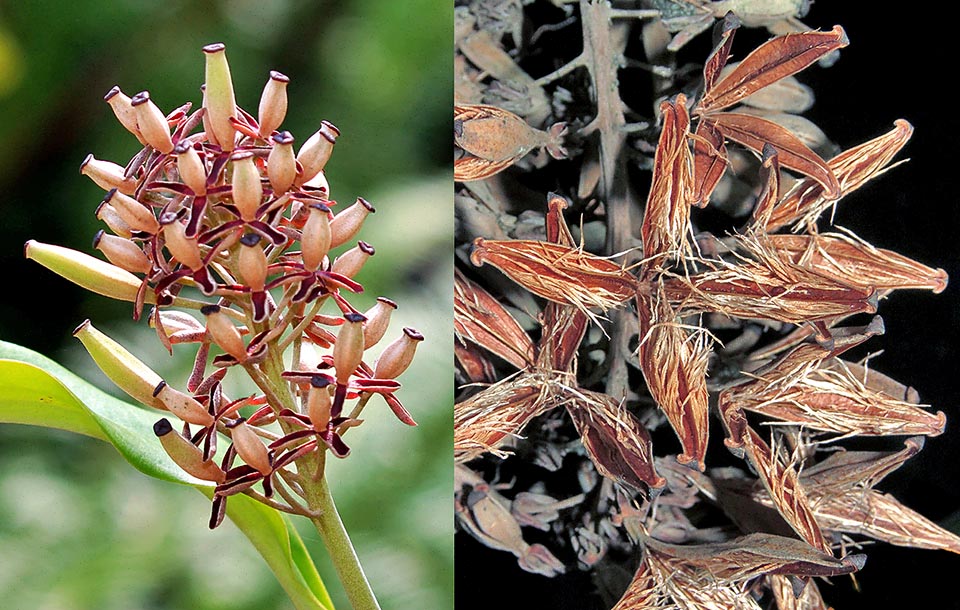 It is cultivated in light, poor and aerated soils, such as peat and vermiculite or siliceous sand and a little of orchid land obtained from bark of pine. It is suggested to utilize rain water or demineralized for watering and only after the surface of the substratum appears dry. The water in excess must not remain in the pot because fungal attacks may take place. Like all carnivores, fertilization is not usually necessary, but at most we can use, occasionally, a small dose of ox blood fertilizer. Repotting can be done even annually, keeping attention not to spoil the roots and the basal ascidia.