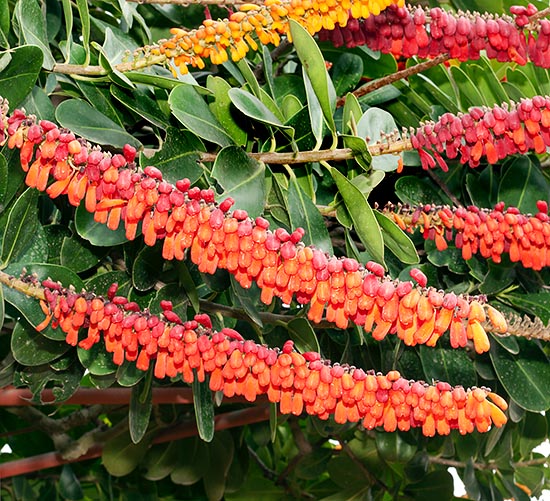 Norantea guianensis is a sarmentose shrub that can exceed the 20 m of height © G. Mazza

The species is native to Bolivia, Brazil (Amapa, Amazonas, Maranhao, Mato Grosso, Para, Rondonia and Roraima), Colombia, Ecuador, French Guyana, Guyana, Peru, Surinam, Trinidad and Tobago and Venezuela, where it grows in the forests often along the banks of the water streams and in swampy locations, from the level of the sea up to about 2000 m of altitude.

The name of the genus comes from that of the plant “conoro-antegri”, in the language of the Cariban Kali’na people, population called Galibi by the Europeans; the Latin name of the species, “guianensis” = of Guyana, refers to one of its origin places.

The Norantea guianensis Aubl. (1775) is a sarmentose shrub which may be more than 20 m tall when close to great trees which act as a support for its branches which anchor, by means of adventitious rootlets issued over their whole length, but the floriferous branches; it can grow also as isolated specimen with the branches expanding laterally.

The alternate leaves, thick, coriaceous, initially orange or reddish, then glossy dark green, are obovate-oblong with acute, obtuse or emarginated tip and entire margins, up to 15 cm long and 6 cm broad.

The inflorescences are terminal spikes, up to about 80 cm long, carrying numerous small sessile hermaphrodite flowers with corolla having five tiny petals, pointed, of violaceous colour, to each flower is associated a hanging bract, unguiculate (with long narrowed base similar to a stem) of colour from orange to bright red, about 2,5 cm long, transformed in an almost ovoid nectariferous sack, the most apparent part of the flower, which has the function of attracting the pollinators, insects and birds, especially the hummingbirds. The fruits are dehiscent berries containing the seeds immersed in a flesh pulp that contributes to their dispersion by means of the birds eating them. It reproduces by seeds and, easily, by branch cutting provided with adventitious roots and by layering. 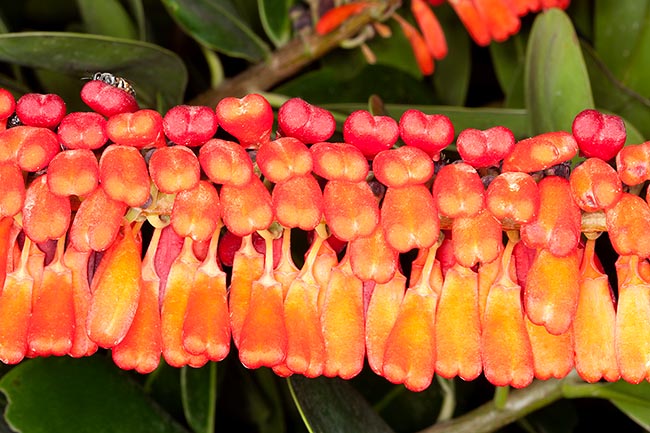 The inflorescences measure about 80 cm. The tiny flowers are hidden by red-orange bracts © Giuseppe Mazza

Species of huge ornamental and landscape value, for the luxuriant foliage as well as for the showy long inflorescences, but little employed in parks and gardens.

It can be associated, as semi-epiphytic climber, to trees of medium or great height, or leaned against railings, used for covering pergolas or grown as tree or brush with appropriate prunings.

It requires a tropical or subtropical climate, with lowest temperatures rarely dropping under 10 °C, even if it can very well bear some degree less for a very short period, and an exposition in full sun. It is not particular about the soil, but prefers the acidic or neutral ones.

Where the permanent outdoors positioning is not possible, it can be cultivated in great pots or tubs, with draining soil rich of organic substance, placed in luminous greenhouses with lowest winter temperatures preferably not under the 14 °C; the waterings must be regular and abundant in summer, more spaced in winter, but without never allowing the substratum to dry up completely.

Bark and leaves are locally utilized in the traditional medicine.