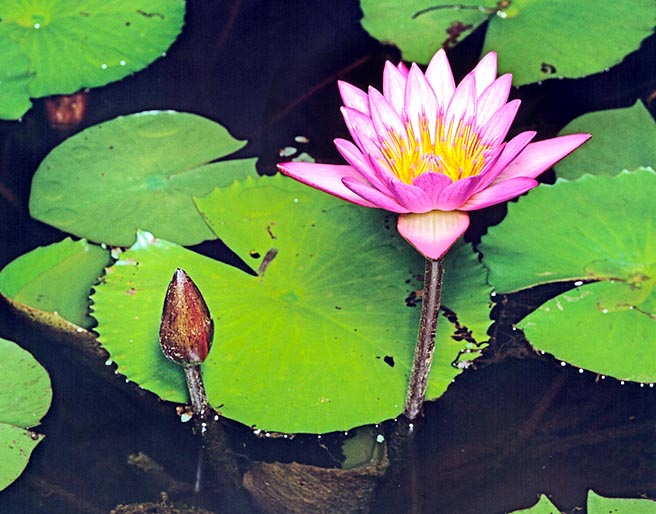 The Nymphaea nouchali Burm.f. (1768) is a perennial freshwater herbaceous plant, rather variable, with erect ovoid rhizome, not ramified, rooted into the bottom sediment; it tends to go to dormancy during the drought periods.

It has solitary leaves at the extremity of a robust petiole traversed by channels where is present air for ensuring the floating and the gaseous exchanges between leaves and roots.

The floating leaves are peltate (having the petiole attached almost at the centre of the lamina), orbicular of 8-25 cm of diameter with entire or crenate (having teeth with round apex) margin, smooth, water-repellent and green on the upper page, slightly purple below; the submerged leaves have a pale green colour on the upper page and are pinkish below.

The flowers, perfumed, are of 5-15 cm of diameter slightly emerging from the water surface, on a peduncle also provided with channels where air is present, with 4 lanceolate sepals, slightly veined, green outside, of the same colour of the petals inside, 3-6 cm long, 10-25 petals from oblong to lanceolate, white tinged with blue, purple, or purple red, and 35-40 stamina, 1-4 cm long of yellow colour tinged with blue at the apex; the flowers open in the morning and close by late afternoon, usually for four consecutive days. 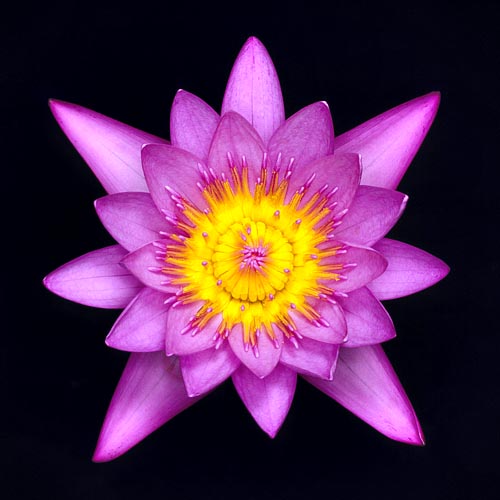 Once the flowering is ended, the peduncle plunges carrying the forming fruit to the bottom, where it completes its ripening.

The fruits are globose, of 2-4 cm of diameter, containing ellipsoid or globular seeds, green, about 1 mm long, with a spongy aril.

Initially, the seeds float due to the presence of air into the aril (fleshy tissue surrounding totally or partially the seed), and this facilitate the dispersion, till when this does not decay, imbued with water, thus depositing them on the bottom.

It reproduces by seed in spring-summer, covered by a thin layer of soil and some centimetres of water, in full sun; the germination takes place in 3-4 weeks; the transplanting is to be done, after the first leaves have appeared, into single containers and then they are dipped into the water.

The first blooming happens by the third, fourth year from the sowing. Amateurishly, the reproduction is done almost exclusively by division of rhizome, with at least the presence of one bud.

It is a species much appreciated since long time and vastly diffused outside from the origin zones, like in Africa, due to its ornamental characteristics; cultivable in the tropical and subtropical climate zones, where it flowers for most of the year, and, marginally, in the warm temperate ones; elsewhere, the plants must be conserved from autumn to spring in a protected environment, at the temperature of 18-20 °C.

It requires full sun, water preferably slightly acidic or neutral and a substratum rich of organic substance which may be formed by a layer of garden earth, a layer of dung and one of gravel as covering. It is often utilized in the aquaria due to the ornamental submerged leaves.

It is the national flower of Bangladesh, in its white variety, and of Sri Lanka, in its pale blue variety.