The species is native to Canada, Caribbean, El Salvador, Honduras, Mexico, Nicaragua and USA, where it grows at the margins of lakes, ponds, swamps and, generally, of calm waters, deep up to about 2 m, covering wide parts of the surface from spring to autumn.

The name of the genus comes from the Latin “nymphae” = nymphs, divinities who, in the Latin mythology, lived in the woods, seas, rivers and lakes; the Latin name of the species “odorata” = odorous, refers to its perfumed flowers.

The Nymphaea odorata Aiton (1789) is a perennial fresh water herbaceous plant with ramified horizontal rhizome, of 2-3 cm of diameter, rooted into the sediment of the bottom. It has solitary leaves at the extremities of a long and flexible petiole, of green or purple colour, traversed by longitudinal channels where the air is present, for ensuring the floating and the transportation of the oxygen, carbon dioxide and methane between leaves and roots. The leaves, floating due to the presence of particular tissues where there is air present in the intercellular spaces, are ovate or almost circular, of 10-35 cm of diameter, with entire margin and the typical V-shaped slit ending at the base of the petiole, narrow or ajar; the upper page is green, waxy and water repellent, the lower one is reddish or purplish. 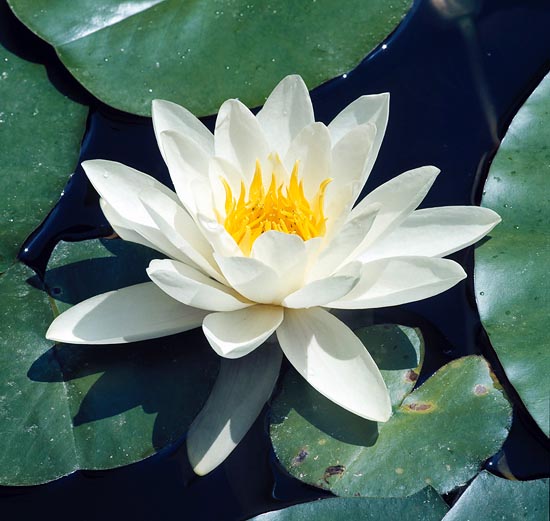 The solitary flowers, of 6-18 cm of diameter, on a peduncle also provided with channels where air is present, floating on the surface of the water or slightly raised, have 4 green sepals and 15-40 lanceolate petals, sharp at the apex, white, rarely pink, which surround 35-120 yellow stamina.

The flowers, which open in the morning for about 6 hours and for 3-4 consecutive days, have the phenomenon of the proterogyny, the stigma is receptive only by the first day, whilst the pollen is released in the following days, thus avoiding the self-fecundation and encouraging the crossed one.

The pollinators are mainly insects, amongst which, bees and coleopterans.

Once the flowering is finished, the peduncle wraps itself in spirals, carrying the forming fruit to the bottom, where it completes its ripening.

The fruits are globose-depressed capsules, of 2,5-3 cm of diameter, containing up to 35 ovoid, green seeds, 1,5-2,3 mm long, which initially float due to the presence of air incorporated into the aril (fleshy sheath enveloping totally or partially the seed) till when this discards and deposits them on the bottom; during the floating time the seeds are dispersed by the currents, the wind or by the ducks ingesting them.

It reproduces by seed, put in water on a sandy substratum rich of organic substance and in presence of light, with the first flowering taking place starting from the third year, or, much more easily, by division of the rhizome.

It requires full sun and clear, calm or in slight movement, waters, possibly weakly acidic or neutral (pH between 6 and 7), even if it bears a slight alkalinity, and sediment rich of organic substance.

It can be cultivated in an ample variety of climates, seen the vast origin distribution area going from Alaska to Central America. In some zones, where it has naturalized, it has become infesting covering with its thick vegetation wide surfaces and inhibiting the penetration of the light, thus altering the characteristics of the aquatic environment and compromising the survival of native animal and vegetal species.

The rhizomes, utilized by the local populations in the traditional medicine for various pathologies, have astringent, antibiotic, antispasmodic and antiseptic properties, but are poisonous in high doses.

Nymphaea odorata was last modified: May 2nd, 2018 by Giuseppe Mazza