The Saddled seabream (Oblada melanura Linnaeus, 1758) belongs to the class of Actinopterygii, the ray-finned fished, to the order of Perciformes and to the family of Sparidae.

The name of the genus “oblada” is the name the ancients were giving to this fish.

The name of the species comes from the Greek “melas” = black and “ura” = tail, that is, “black tail”.

Present in the whole Mediterranean basin, after Gibraltar Strait it goes northwards, on the Atlantic coast, up to the Gulf of Biscay and southwards up to Angola, including the Azores, Madeira, Canaries and Cape Verde Islands.

The saddled seabreams frequent, like the breams, the rocky coasts and the Posidonias (Posidonia oceanica) prairies, but do have more pelagic habits. They almost always swim in midwater, often in small schools, exploring the seabed while looking for small preys, and do not have a den, even if, sometimes, we can see some small groups, during their siesta, in the shade zones between the cracks of the rocks. In any case, they keep in shallow waters, going down, at the maximum, to 30 m of depth.

The saddled seabreams can reach the 34 cm of length and the kilo of weight, but the current dimensions are close to the 20 cm. 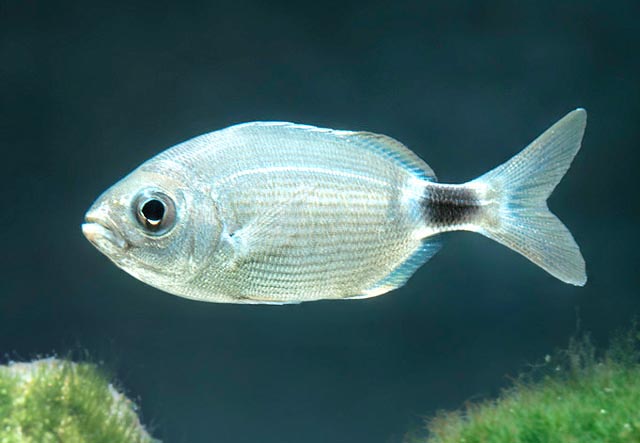 The body is oval, lower than that of the breams, laterally compressed as is the case of all the sparids, and grooved by 14-18 dark thin lines barely visible on the sides.

The mouth is small, oblique upwards. The two jaws, symmetrical, have 5 rows of teeth. The first, outer, is formed in front by cutting incisors, for grazing the seaweeds, followed by conical and sharp teeth, bent backwards for holding the preys. Then, further inside, there are 4 rows of small granular teeth for chewing.

The eyes are fairly big, probably because they often go hunting at dawn and during the night.

The colouration is silvery, with slightly bluish back in order to merge with the colour of the sea and not to attract the attention of the birds of prey when it swims in surface looking for food.

The zone over the eyes is dark in the adults, but the most important characteristic, which has given the name to the species, stands in the black dot symmetrical to the eye, on the caudal peduncle. It is already present in the 2 cm juveniles, emphasized by a paler edge. In the adults it merges up with the contiguous one thus forming a saddle, but never merges down below. 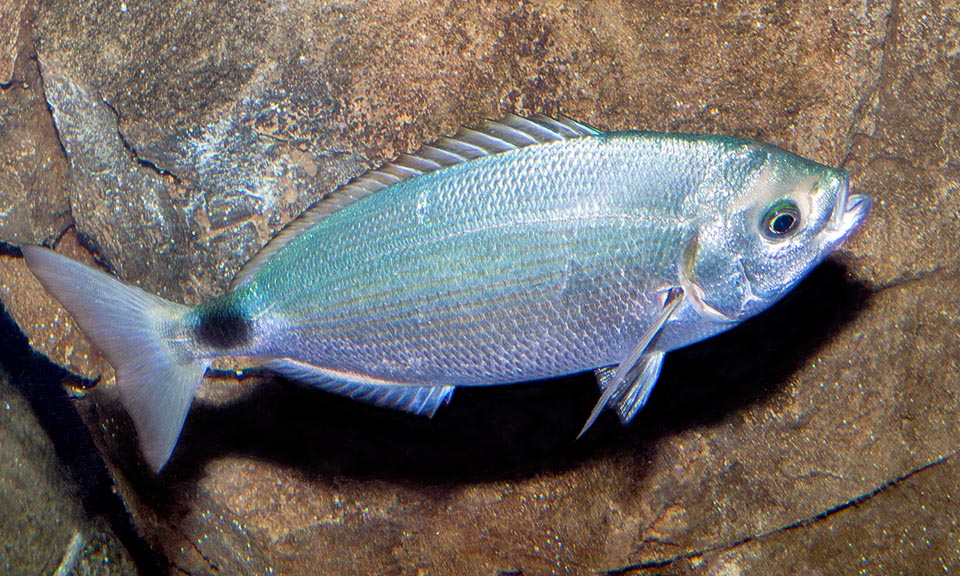 In the adults the black dot merges up with the contiguous one thus forming a saddle, but never merges down below © Giuseppe Mazza

The saddled seabream is omnivorous: it nourishes, in a proportion which differs depending on the season and the age, of seaweeds, molluscs and mainly of small crustaceans, such as copepods, isopods, amphipods and young decapods, but also of tunicates, eggs of fishes and annelids.

Even if many specimens do not change of sex, this is a protogynous hermaphrodite species, with females that, while growing, may transform in males. The reproduction takes place in spring, with pelagic eggs, and in August the 10-15 cm post-larval stages are numerous in the plankton. They will achieve the sexual maturity around the three and a half years of age and their life expectancy is of about 14 years. The vulnerability index of this species is of 34 over 100.