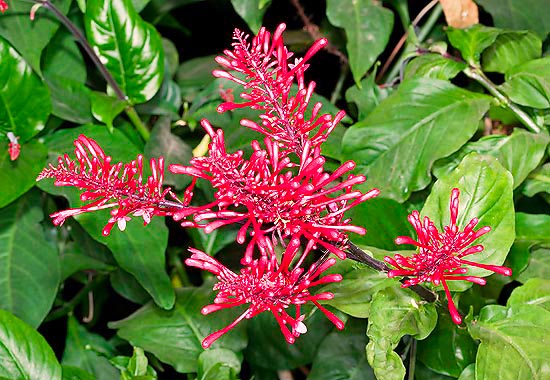 The Odontonema cuspidatum (Nees) Kuntze (1891) is native to the thin forests of Mexico.

The name of the genus is the combination of the Greek words “odontos” = tooth and “nema” = thread, with reference to its very thin style and to the indented stigma; the Latin name of the species, “cuspidatum” = sharp, refers to the sharp extremity of the leaf.

Evergreen, suffruticose plant (that is, partially lignified herbaceous), or shrubby, 1,5-2 m tall, with opposite ovate-elliptic leaves of an intense, glossy, green colour, long up to 25 cm and 10 broad, with sharp tip.

The inflorescences are terminal racemes long up to 20 cm, carrying several tubular, 2,5-3 cm long, scarlet flowers. The fruits are clavate capsules, long up to about 20 mm, containing a maximum of four flat seeds. Usually, it easily reproduces by cutting and by root suckers, as when cultivated, seldom produces vital seeds.

Very popular plant in the tropical and subtropical areas because of its easy cultivation and as being a plant preferred by the hummingbirds. It can also be cultivated in warm-temperate regions, but in this case, during the cold months, it will lose the aerial part, to finally germinate again from the roots in spring; in such situation the blooming is late-summery and autumnal, whilst in the tropics it is blooming for a good part of the year. It prefers the full or filtered sun and a sub-acid or neutral soil, kept humid, even if well stabilized plants can bear short drought periods.