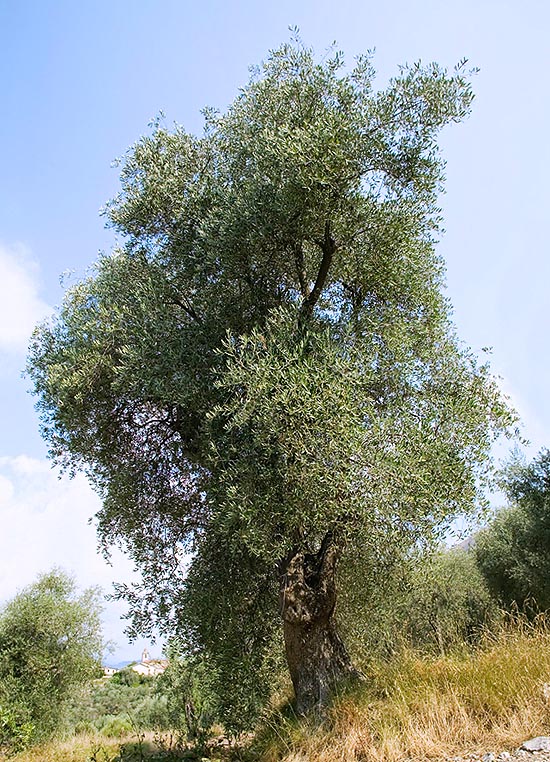 The name of the genus is the Latin one of the plant; the Latin name of the species, europaea = European, of Europe, refers to one of its origin areas.

The Olea europaea L. (1753) is a shrub or evergreen tree, long-living as it can reach and exceed the 5 centuries of life with specimens in the wild of an estimated age of 2000 years, up to about 15 m tall and with a gnarled and twisted trunk with the age and greyish bark, whitish in the juvenile branches; the rooting apparatus is expanded and usually superficial. The leaves, on a 0,5 cm long petiole, are opposite, coriaceous, from lanceolate to elliptic, 1,5-8 cm long and 0,5-2 cm broad, with pointed apex, of dark green colour on the upper page, thickly covered by tiny silvery white scales below. The flowers are bisexual or male (staminate), united in terminal or lateral cymes, 2-4 cm long, on the one year old branches, rarely on those being two, with a corolla with 4 oblong, 1-3 mm long lobes, cream white, the pollination is mainly anemophilous.

The fruit is an ovoid drupe, blackish purple when ripe, 1-4 cm long and 1-2 cm of diameter, containing only one oblong seed; the pulp, bitter due to the presence mainly of a glycoside, the oleuropein, contains about the 20% of oil, whilst in the seed there is only the 3-4% of the same. The numerous varieties which have been selected throughout the centuries, have much variable form of the fruits, size, taste and contents of oil, variability depending also on the methods of cultivation, harvest, extraction and conservation; we have to note that unlike the other vegetal oils, extracted mainly from the seeds, the olive oil is extracted from the pulp, and therefore holds particular characteristics.

The reproduction by seeds, which germinates in 1-2 months, is done only for getting plants to be utilized as rootstock, for the hybridization and in the studies about the genetic improvement, seen the variability and the difference of characteristics, compared to those of the parents, of the plants obtained in such a way. 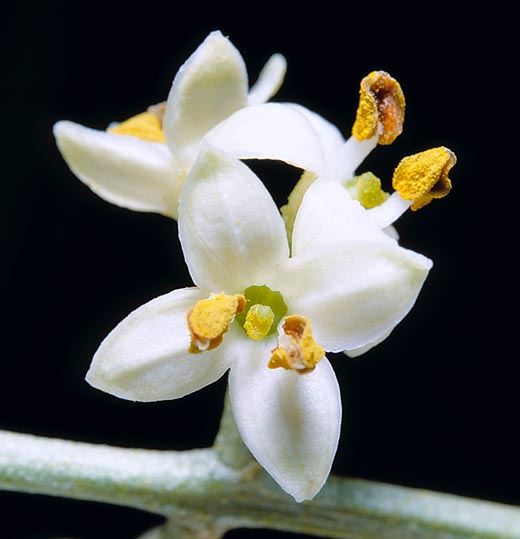 For reproducing the varieties they effect the grafting, but, more commonly, the semi-woody cutting; they utilize usually one year old portions, 10-30 cm long with 4-5 nodes and two couples of leaves, placed to root in a much porous substratum with high air humidity, obtained by means of nebulisation, and bottom heat (22-25 °C); the production begins after 3-6 years.

It is a species requiring full sun and of which is known the great adaptability to different types of soil, even if very poor, calcareous and moderately saline, provided well draining, as it does not bear water stagnations, and to even extreme climatic situations, as it does bear summer temperatures and long drought periods, as may be met in semi arid zones.

The ideal climate for a best production, as quantity as well as quality, is however the Mediterranean type one, with long warm and dry summers and mild and moderately rainy winters, with a more or less long period of cold, for facilitating a more abundant flowering and fructification.

The olive buds differentiate in flower buds in the summer preceding the flowering, on the base of the genetic characteristics and of the environmental and conditions of cultivation, but for getting a regular development of the flower it is necessary that during the winter the plant undergoes a certain period of rather low temperatures for interrupting its dormancy, around 10 °C for 6-10 weeks, except for the varieties which have originated in the southernmost areas of the Mediterranean which usually need a shorter period; the olive rarely fructifies, with high temperatures all over the year, as it is the case of the tropical countries. For what concerns the resistance to the low temperatures, values less than -5 °C may cause damage seriously the foliage; the whole crown may be destroyed between -10 and -12 °C, whilst temperatures between -16 and -18 °C may kill the plant.

The olive, for genetic causes and also for ambient ones, tends to produce abundantly every other year, even if this alternation may be minimized through cultivation practices, therefore the prunings are done usually by late winter-early spring in the year preceding that when a lesser harvest is foreseen, this operation, done by specialized personnel, has the main aim of thinning the crown in order to facilitate the passage of the light and the air circulation and to facilitate the harvesting. 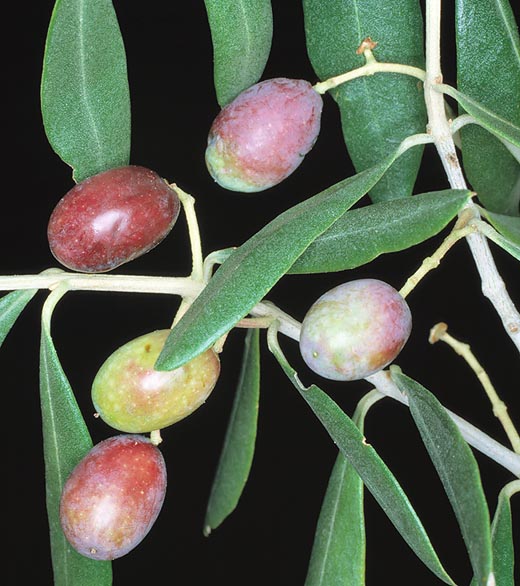 The fruit is an ovoid, even 4 cm long, drupe. The oil is got from the pulp © Giuseppe Mazza

The role the olive, cultivated since 5000 years ago along the Mediterranean coasts, has held in the western civilization is well known, in the Greek and Roman worlds the tree, its branches and the oil extracted from its fruits were considered as sacred and had an important role in the religious functions and in the civil manifestations; the olives and the oil were not only utilized as aliment, but also as fuel for the lamps, in the medicine and in the cosmetics.

Still nowadays, the oil, utilized raw in salads, for cooking and for preserving other foods, as well as the fruits, appropriately treated for taking off from them the bitter taste, are fundamental ingredients of the so-called Mediterranean cuisine.

Most of the production is intended for the extraction of the oil; only about the 8% of the fruits are used for the direct consumption.

The olive oil is, among the oils of vegetal origin, the second as for importance, after the palm one, and the maximum of its production is concentrated in the Mediterranean area, in particular, Spain, Italy, which has the highest number of cultivated varieties (500 about), and Greece, furnish about the 75% of the whole world production.

For the production of the oil, the harvest, by hand or mechanic, by shaking, is done in the moment when the fruit changes from green to blackish, in the late autumn, early winter, depending on the variety and the climate; the harvest is then led, in short times, 1-3 days, to the pressing in order to avoid enzymatic and oxidative reactions which might alter its quality.

The table olives are picked up by hand, the green ones by early autumn, and the black ones when completely ripe. The oil is formed by unsaturated fats, mainly oleic acid, for the 60-80%, linoleic acid, 3,5-18%, and palmitic acid, 7,5-20%, and for the 1-2% by minor compounds formed by polyphenols, sterols, aromatic compounds and pigments, much variable qualitatively and quantitatively, and which are those differentiating in a significant way the characteristics, first of all organoleptic, of the various types of oils; the polyphenols have an important role as they contribute in keeping stable for long time the characteristics of the oil, thus avoiding its oxidation, which may lead it to go rancid. The characteristic green colour is due to the presence of chlorophyll, also it having an antioxidant action in absence of light, whilst it favours the rancidification in its presence, therefore, for a correct conservation, the oil is to be kept in the dark in steel vessels of in dark green bottles. 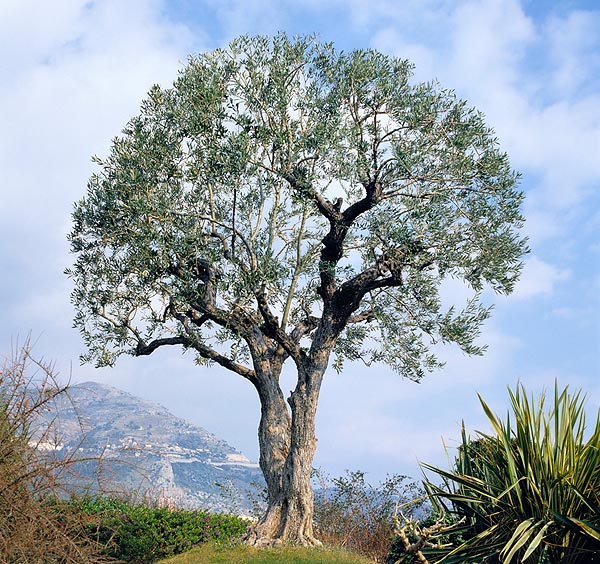 The classification of the oils intended for consumptions is ruled by the legislation of the European Community; in an absolutely general line, the oils are distinguished in:

virgin olive oils, obtained from the fruit of the olive exclusively by means of mechanical or physical processes and without any addition of oils of other nature;

oils of olive, formed by virgin oils submitted to refining in order to improve their characteristics, blended with variable quantities of virgin oils;

olive pomace oils, formed by oils obtained by extraction with solvent from the pomace (residual of the mechanical extraction process of the oil) and submitted to refining processes, blended with variable quantities of virgin oils.

Minor uses of the oil are done in the pharmaceutical, cosmetic industry, and in the soaps manufacturing. The leaves and the buds are, since remote times, utilized in the traditional medicine for various pathologies, the oil for massages.

Finally, it is plant of great ornamental value, due to its gnarled and twisted trunks and the green grey foliage, much appreciated also for the little cares it requires and the limited water exigencies, utilizable in the Mediterranean and semi-desert type gardens, even close to the sea.

Olea europaea was last modified: May 2nd, 2018 by Giuseppe Mazza