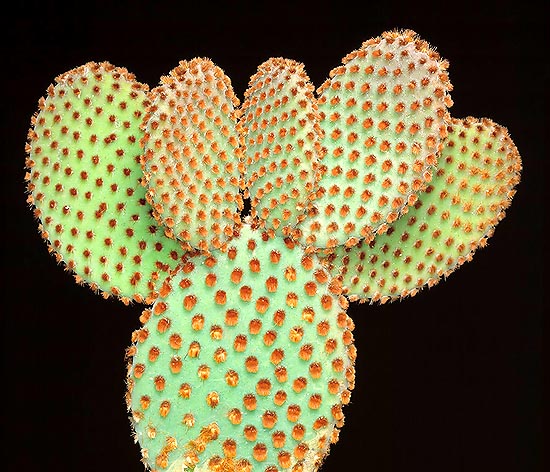 The plant is native to Mexico (states of Coahuila and Chihuahua) and to USA (Texas : counties of Hudspeth, Presidio and Brewster), where it grows in desert areas close to the banks of the Rio Grande, on open sandy plateaux as well as on rocky-stony slopes, mostly calcareous, between the 500 and the 1.300 m of altitude.

The Opuntia microdasys subsp. rufida (Engelm.) U. Guzmán & Mandujano (2003), for long time considered as a species itself (Opuntia rufida), is a much ramified succulent, on a short stem, which forms erect tufts which may reach a height of about 1,5 m and a breadth of 2,5 m.

The stems are formed by flat articles, the cladodes, of circular, obovate or elliptical form, 6-18 cm long and 6-20 cm broad, pubescent, of grey-green colour, which during the growing phase are provided with fleshy conical leaves (subulate), of green colour with reddish apex, short lasting. The surface of the cladodes is covered by circular areoles of 3-6 mm of diameter, placed in diagonal lines, without thorns but with a short white or bronze down and with thick glochids (tufts of thin thorns, long a few millimetres) of reddish brown colour which easily detach.

The flowers generate in spring usually from the areoles placed on the upper edge of the one year old cladodes, open by late morning and close by night time, and are 3-5 cm long with yellow tending to the orange tepales, the outer ones being lanceolate, the inner ones obovate with almost truncated apex. The fruits are globular berries, concave (umbilicate) at the apex, of 2-3 cm of diameter, of reddish green colour with greenish pulp containing bronze coloured circular seeds of 2-3 mm of diameter. It easily reproduces by means of the cladodes to be placed, for rooting, in a sandy substratum.

Very ornamental and of easy cultivation, it is one of the succulents which attracts the attention of those beginning to get in love with the cultivation of the cacti. The best place of cultivation in open air are the rocky or sandy grounds, arid or semi-arid, even poor, provided they are perfectly draining, in full sun, in climates with dry winters and little rainy summers. Dry and for short time, it stands temperatures as low as -8° c, whilst, in presence of rain or snow, it seems it can resist until -4° C, even if it is better, in absence of whatever protection, not to expose it to temperatures lower than 0° C. Where the climate does not allow the open air cultivation, it is to be cultivated in pot, with the same aforementioned modalities, in order to place it in shelter during the winter.

In summer, during the vegetative period, it is to be regularly watered, but allowing the substratum to well dry up before irrigating again, in winter the watering must be limited if the cladodes tend to become wrinkled. It is better not to touch the cladodes barehanded, the glochids, in fact, detach easily from the plant and keeping stuck to the skin may cause serious irritations.

The common names in English (blind prickly pear) and Spanish (nopal cegador) come from the belief that the glochids, easily removed also due to small bumps and carried by the wind, may cause blindness to the livestock. The plant is inscribed into the appendix II of the Cites (plant whose trade is ruled at international level).