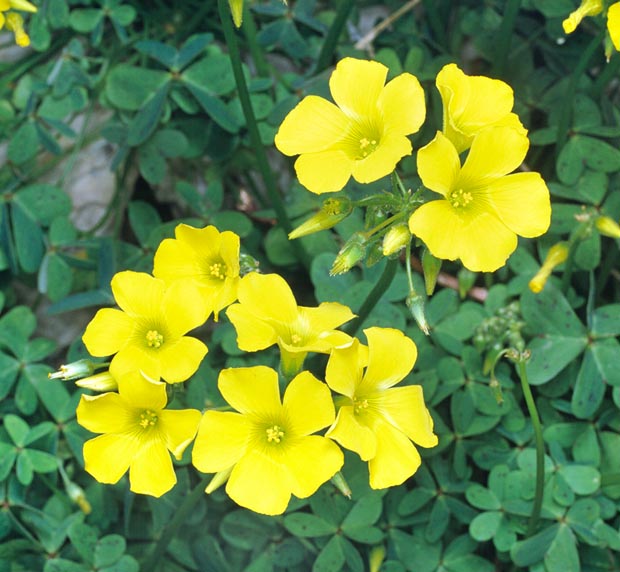 The Oxalis pes-caprae is decorative, rich in vitamin C, but harassing © Giuseppe Mazza

The species is native to Namibia and South Africa (Province of Eastern Cape, Province of Northern Cape and Province of Western Cape), where it grows in semi-desert areas, which has naturalized, becoming a pest, in all sub-tropical and Mediterranean areas.

The name of the genus is the combination of the Greek terms “oxys” = acid and “hals, halós” = salt, with reference to the acidulous and salted taste of the plant; the name of the species is composed by the Latin terms “pes” = foot and “caprae” = goat, due to the shape of the small leaves.

The Oxalis pes-caprae L. (1753) is a perennial herbaceous species, 5-25 cm tall, having an underground ovoid bulb with pointed apex, 1-3 cm long and with a diameter up to 1 cm, from which depart yearly a vertical stem, thick and fleshy in the terminal part placed at the level of the soil, surrounded all along its length by several bulbils; the root is fleshy and narrows (contractible) carrying bulbs and bulbils in depth, up to about 20 cm and more. At the apex of the stem, it has a foliar rosette with 3-15 cm long petioles ending in a leaf formed by three obcordate leaflets, 0,8-2 cm long and 1,2-3 cm broad, slightly succulent, of a pale green colour, at times spotted of purple, with deeply indented (emarginated) apex. The inflorescences, from 1 to 5, axillar, on a 15-30 cm long scape, are umbelliform cymes carrying up to 20 funnel-shaped flowers, of 2,5-3,8 cm of diameter, with 5 obovate petals, 2-2,5 cm long, of an intense yellow colour. The flowering takes place in winter-early spring and by its ending, in late spring, the aerial part disappears for reappearing in autumn. The fruits are pointed, pubescent capsules about 0,6 cm long. It is a species having the phenomenon of the heterostyly, with at least two types of flowers, some with short styles, not exceeding the length of the anthers, others with longer ones; this hinders the self-fecundation and renders necessary the crossed fecundation.

In the Mediterranean area it is present only the type with short style, therefore there is no production of seeds and the diffusion happens only by means of the bulbils, up to 25 per plant and per year, through which it quickly expands, covering thickly vast areas rendering it highly harassing, furthermore, the leaves have a high contents of oxalic acid which can be fatal for the cattle if eaten in big quantity. It has been introduced in Sicily in 1796 as ornamental plant; there is no doubt that a thickly flowered extent, in winter, is an unforgettable view, it has quickly diffused in all the Mediterranean countries and, later on, in those with semi-arid climate and of Mediterranean type, such as California and vast zones of Australia. The temperature is a limiting factor for its diffusion, as it does not bear values of less than about -6 °C; it grows in whatever type of soil, even sandy and rocky, in open areas, such as cultivated or fallow fields, as well as in the forests. The leaves have been utilized in the past in the popular medicine and by the seamen as antiscorbutic, due to the high contents in vitamin C, and moderately, due to the toxicity given by the oxalic acid in the alimentation, for instance, added to the salads for seasoning them; in some places they were consuming also the roasted bulbs.

Oxalis pes-caprae was last modified: May 2nd, 2018 by Giuseppe Mazza