The beautiful opium flowers. Poppies have ornamental corollas of all colours, including blue. The very efficient reproductive structure of these scentless flowers and the most gorgeous species. Medicinal properties. 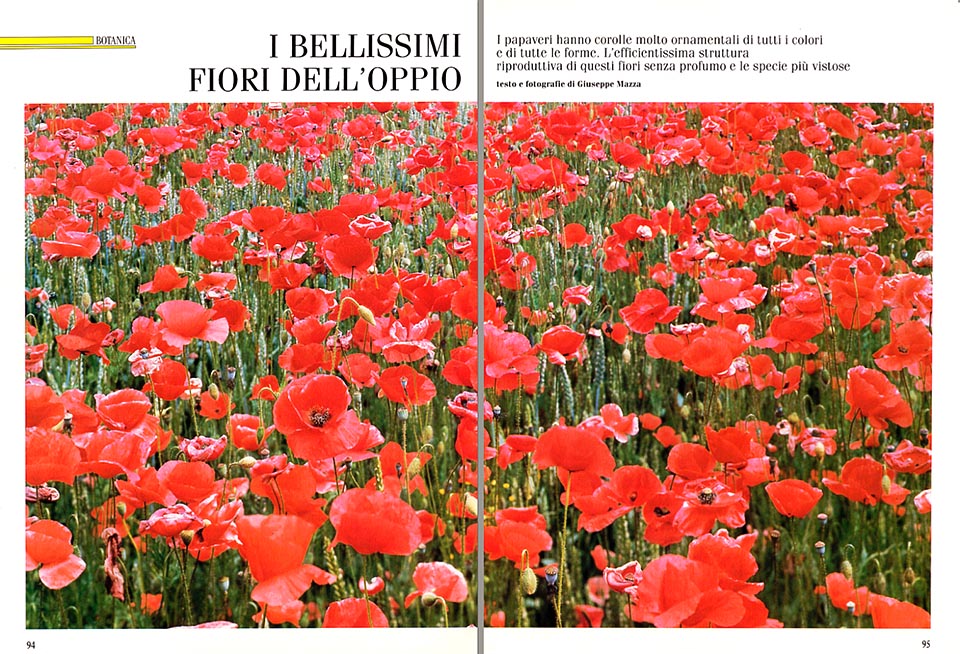 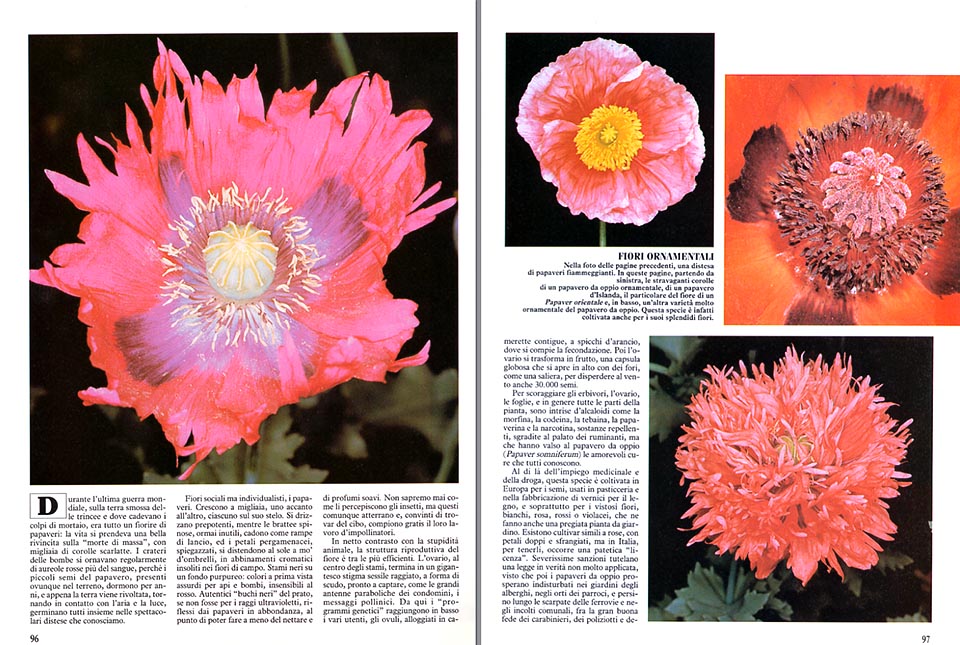 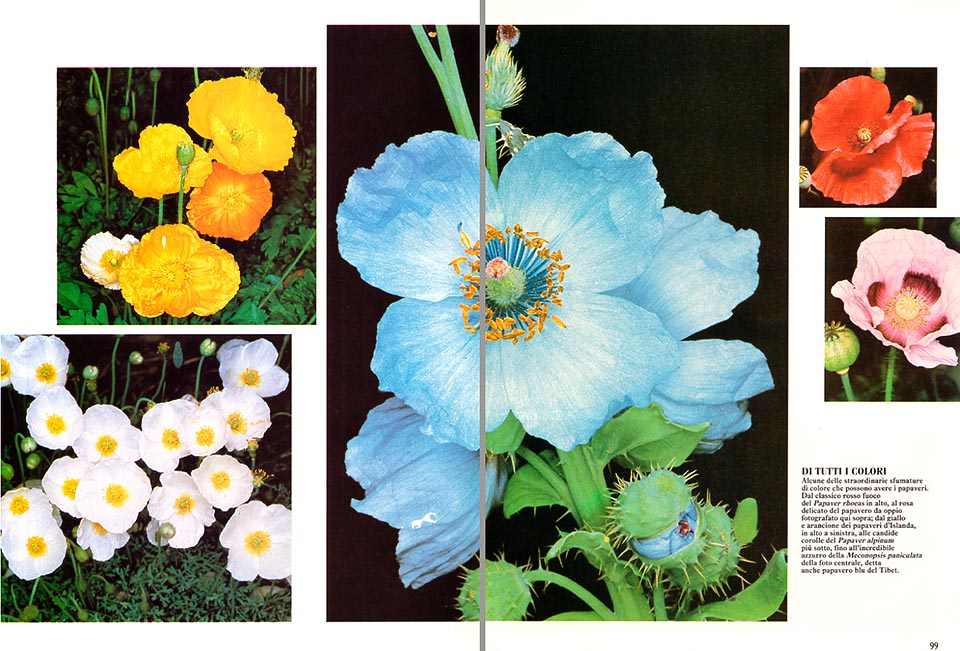 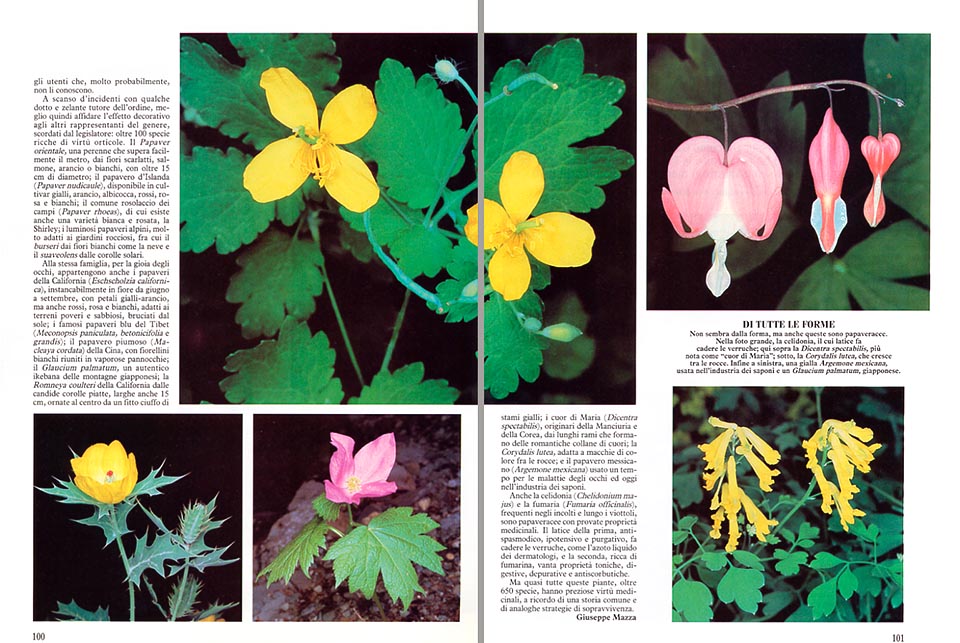 During the last world war, on the land removed by the trenches, and around, where the mortars shells were falling, there was a full flowering of poppies.

The life was taking its revenge on the “mass death”, with thousands of scarlet corollas, in singular patriotic matchings, with the white of the daisies, and the green of the meadows.

The craters of the bombs were regularly adorning themselves of blazing halos, more red than the blood, because the seeds of the poppy, present everywhere in the ground, sleep for years, and, as soon as the soil is removed, and come back in contact with the air and the light, they germinate all together, in record time, in the spectacular expanses known by everybody.

Social flowers, but individualist, the poppies.

They grow up by thousands, one close to the other, each one on its stem. They stand up, overbearing, while the thorny bracts, now useless, fall down as launching ramps, and the parchment-like and creasy petals, stretch in the sun, like umbrellas, in chromatic couplings quite unusual for the wild flowers.

Black stamens on a purple background: colours absurd at first sight, for bees and bumble-bees, which are indifferent to the red colour.

Authentic “black holes” of the meadow, should not it be for the ultraviolet rays, reflected abundantly by the poppies, so much that they can do without the nectar and the sweet scents.

We shall never know how the insects perceive them, but they land, and, persuaded to find some food, they accomplish fee, frustrated, their function of pollinators.

In clear contrast with the animal stupidity, the reproductive structure of the flowers stands among the most efficient.

The ovary, at the centre of the stamens, ends in a gigantic sessile radiate stigma, with the shape of a shield, ready to intercept, like the big parabolic antennas of the apartment buildings, the pollen messages.

From here, the “genetic programmes” reach, below, the various users, the ovules, lodged in contiguous small rooms, like segments of an orange, where the miracle of the fecundation takes place.

Then, the ovary transforms in fruit, a globe-like capsule, which opens on the top with some holes, for dispersing in the wind, like a saltcellar, even 30.000 seeds.

In order to discourage the herbivores, the ovary, the leaves, and, generally, all the parts of the plant, are drenched of alkaloids like the morphine, the codeine, the thebaine, the papaverine and the narcotine, repellent substances, unpleasant for the taste of the ruminants, but which have brought to the opium poppy (Papaver somniferum), the loving cares we all know.

Apart the medicinal employment and the drug, this species is cultivated in Europe for the seeds, utilized in confectionery, in the fabrication of varnishes for the wood, and, mainly, for the showy flowers, white, pink, red or purple, which make it a valued garden plant.

There are cultivars resembling to roses, with double and laciniated petals, but in Italy, for keeping them, a pathetic “licence” is required. Very strict sanctions protect a law, really not too much applied, seen that then the opium poppies prosper, undisturbed, in the gardens of the hotels, in the orchard of the parish priests, and even along the escarpments of the rail roads, and in the municipal uncultivated fields, between the great good faith of the carabineers, the policemen and the users, who, most probably, do not recognize them.

To avoid all misunderstandings with some learned and zealous policemen, better, then, to entrust the ornamental effect to other members of the genus, forgotten by the lawmakers: more than 100 species rich of horticultural virtues.

The Oriental Poppy (Papaver orientale), a perennial which easily is taller than one metre, with scarlet, salmon, orange, or white flowers, with more than 15 cm of diameter; the Iceland Poppy (Papaver nudicale), available in yellow, orange, apricot, red, pink, and white cultivars; the common Corn Poppy (Papaver rhoeas), of which exists also a white and pink variety, the “Shirley”; the luminous Alpine Poppies, very suitable for rocky gardens, between which the burseri, with flowers white like snow, and the suaveolens, with its sunny corollas.

To the same family, for the enjoyment of the eyes, belong also the California Poppies (Eschscholzia californica), untiringly in flower, from June to September, with yellow-orange petals, but also red, pink and white, fit for poor and sandy soils, burnt by the sun; the famous Himalayan Blue Poppies (Meconopsis paniculata, Meconopsis betonicifolia and Meconopsis grandis); the Plume Poppy (Macleaya cordata), of China, with white small flowers united in fluffy panicles; the Horned Poppy (Glaucium palmatum), a real ikebana of the Japanese mountains; the Coulter’s Matilija Poppy (Romneya coulteri), of California, with flat candid corollas, wife even 15 cm, adorned, in the centre, by a thick tuft of yellow stamens; the Venus’s Cars (Dicentra spectabilis), native of Manchuria and Korea, with long branches which form romantic necklaces of hearts; the Yellow Corydalis (Corydalis lutea), good for creating coloured spots between the rocks; and the Mexican Poppy (Argemone mexicana), once used in the diseases of the eyes, and nowadays, in the soap industry.

Also the Greater Celandine (Chelidonium majus), and the Common Fumitory (Fumaria officinalis), frequent in the wild and along the paths, are papaveraceae with reliable medicinal properties.

The latex of the first one, anti-spasmodic, hypotensive, and cathartic, causes the fall of the warts, like the liquid nitrogen of the dermatologists, and the second one, rich of fumaric acid, boasts tonic, digestive, depurative and anti-scorbutic properties.

But almost all these plants, more than 650 species, hold precious medicinal virtues, in memory of a common history, and of analogous strategies of survival.

Papaver : poppies and relatives was last modified: May 22nd, 2019 by Giuseppe Mazza