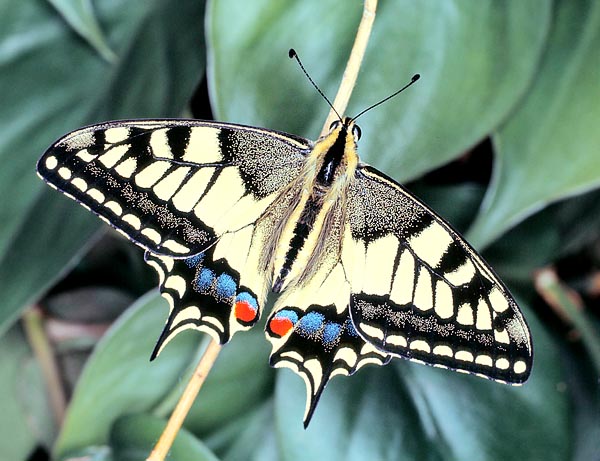 Among the most beautiful butterflies in the world, many are ascribed to the huge family of the Papilionids (Papilionidae), and, quite frequently, these lepidopters may be of great size.

A member of this family standing out for its particular beauty is the swell Old world swallowtail (Papilio machaon Linnaeus, 1758).

Besides the common Old world swallowtail, present in the Italian peninsula, we remind that the other Italian papilionids are the Papilio hospiton, the Papilio alexanor, the Iphiclides podalirius, all similar to the more famous sister, about which we treat in this text, to which add the species of the genera Zerynthia and Apollo.

Typical species of these two last genera are the Zerynthia hypsipyle and the Parnassius apollo, which have, since always, delighted the eyes of the entomological biologists and of the collectors. 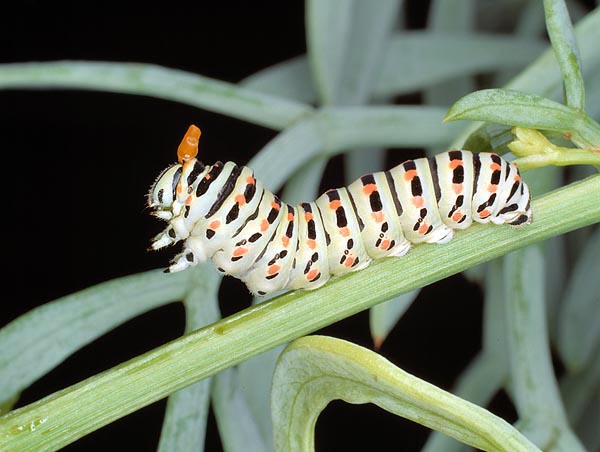 The Old world swallowtails are diffused all over the Italian peninsula, major islands included, from the plains up to the mountains, over the 2.000 meters of height above the sea level.

They are also present in France and in the Iberian Peninsula.

These butterflies, with their elegant and unpredictable, tend to colonize the mountain areas right from the spring.

The legs of the papilionids are rather short but functional in the males as well as in the females, the antennae are quite short, not too thin, inserted one close to the other and clavate at the tip.

The wide wings have a characteristic shape, especially the hind ones, which are equipped (like other species of the same genus) on the back margin, of an extension, even much developed and caudiform. Furthermore, the colours of all members of the family, and therefore also of the old world swallowtails are really splendid, possibly amongst the most beautiful observed in the whole order of the lepidopters, especially in the exotic species, which, however, represent the overwhelming majority of the members of this family. 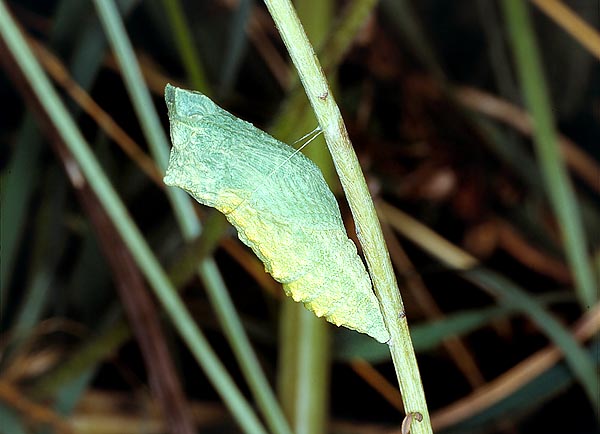 Pupa on stem. The autumn one winters and the imago butterfly flutters in spring © Giuseppe Mazza

Few are, in fact, the papilionids of our country, or more in general, Europeans, and indeed, apart a couple of species which were more common in the past, but which still now can be found quite easily, the others are rare all over the territory.

These European specimens (the old world swallowtail in Italy, France and Spain), have indeed a coloured livery, but less showy than that of the ones of the warm, tropical and subtropical countries.

But, at least for our territory, the Old world swallowtail (Papilio machaon), if not the most beautiful, stands by sure among the finest we do have.

The name “Machaon” was given by the biologist Carl Linnaeus to this butterfly, drawing inspiration from the Greek mythology, using the name of Asclepius’ son.

This butterfly is also one of the greatest European lepidopters, having a wingspan of almost 9 cm. Moreover, it is endowed of a wing extension in the scalloped hind wings of a maximum length of one centimetre.

The background colour of the old world swallowtail is a nice sulphur yellow (at times closer to the dirty white), on which are evident the dark veins and a series of black spots; black too, alternated with “yellow lunulae”, are the edges of the wings, along which runes more internally, a blue belt, edged of black. 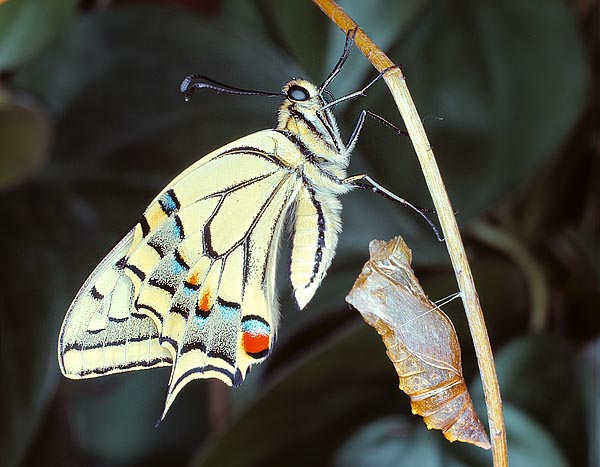 A Papilio machaon having just left the pupa © Giuseppe Mazza

In the apical part of the inner margin of the hind wings, furthermore, there is a fine and lively red spot, edged all around in dark.

These butterflies do not live long once they have reached the imago state.

Most of the times, the males, after having reproduced, eventually let themselves die without nourishing any more, whilst the females encounter the same fate only after having laid their eggs, quite small and numerous, on a vast number of plants of the family of the Umbellifers (Umbelliferae), such as the fennel, the carrot and the anise, etc.

If the atmospheric conditions are favourable, these spherical seeds hatch after a few days, originating larvae (caterpillars), usually of a velvety black, which becomes almost green after a certain number of consecutive moulting, which have many spots and coloured rings, the form of which and their development very a lot during the various stages of the growth.

However, at the birth time, the caterpillars are brownish, with a black belt towards the middle of the body and have several tiny reddish tubercles.

When at the maximum size, on the contrary, that is when they have reached the length of 5-6 cm, the caterpillars become green and in correspondence of each segment there is a dark spot maculated of red. 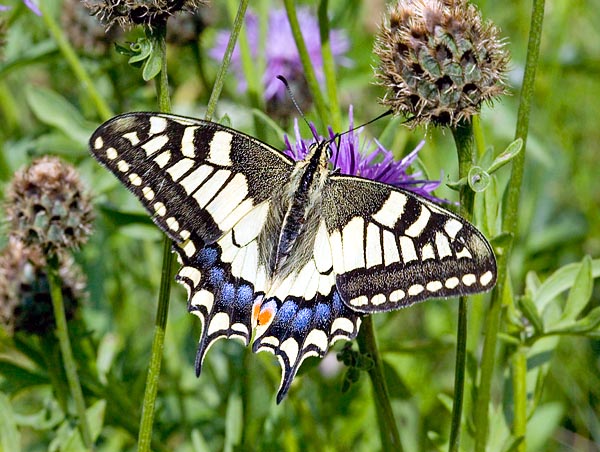 Machaon life is short. They die after coupling and spawning © Giuseppe Mazza

Completely hairless or without bristles, these caterpillars painfully climb the nourishing plants, eating continuously the most tender tissues. Furthermore, if alarmed or scared, they raise a long and showy bifid extension of the prothorax, the osmeterium, emitting a disgusting smell and which, time ago, was deemed to be a structure designed to terrify the enemies. Presently, on the contrary, it is more likely to be simply an excretory organ for the elimination of the toxic materials coming from the vegetables the larva nourishes of.

When the maturity is reached, the caterpillar anchors on the stems, with a silk small belt and, moving actively, gets rid of the tegument which, falling, leaves the barren pupa, of brownish-green colour and of angular forms.

The imago will flutter during the spring itself, or at the most, during the summer if it is a summer generation, whilst if it’s an autumnal one, the pupa will hibernate originating the adult only by the following year.

The IUCN and the CITES consider this species as not yet endangered, as however are the Papilio hospiton and the Papilio alexanor.