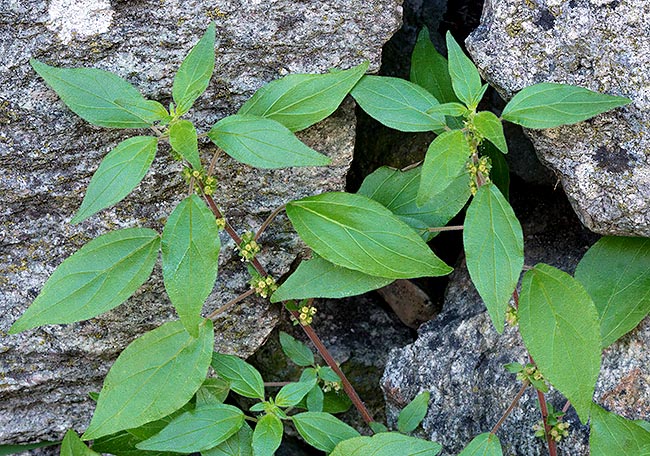 Parietaria officinalis is very common in Europe, near the walls, up to 900 m of altitude © Giuseppe Mazza

The original distribution range of the Pellitory of the wall (Parietaria officinalis L. 1753), also called lichwort, extends from temperate Europe up to Ukraine. The name of the genus, to which, after various Authors, are ascribed from 20 to 30 species, comes from the Latin “paries” = barrier, wall, due to the characteristic habitat of most species of the genus; “officinalis” comes from the Latin substantive “officina”, used for most of the plants having medicinal properties employed in the “workshops” as were called the pharmacies of yore.

The flowers are arranged in geminous tops, white-greenish, sessile, glomerulus, multiflorous. The hermaphrodite flowers, with three bracts, are carried at the apex of the small branches, whilst the male flowers as well as the female ones, furnished of only one bract, are placed at the bifurcations of the branches. The bracts are ovate or oblong, free at the base. The flowering takes place from May to October. The fruits are tiny 1-2 mm olive-shaped achenes, compressed and covered by the persistent perianthium.

It is a very common species in the natural habitat (forests soils rich of nutrients, abandoned grounds) as well as, as invasive, in the cultivated and inhabited locations (edges of ditches, uncultivated but rich in nitrates grounds, at the foot of the walls, gardens, fences, courtyards, etc., from the plain up to 900 m of altitude). The pellitory of the wall spreads by seed by entrusting its dispersion, mainly zoophilic, to the capacity of the plant to adhere to the hair of the animals and to the clothes, to the machineries, so that even only one small piece of transported stem carries the seeds along its way. The person taking care of the green by mowing the pellitory or taking it off from the wall, does not realize that it will be just him to seed it again in the habitat ….

Furthermore, the ability of this species to resprout from the stems, very frail and easy to tear off, is impressive seen the remarkable quantity of the gemmae placed on the rhizomes and at the base of the plant, ready to always emit new vigorous buds.

Much similar species is Parietaria judaica L. (= P. diffusa M.& K.; P. ramiflora Moench.), often encountered on old walls, rocks, rubbles, distinguishable because having much ramified stems, often more or less lignified below and with compact appearance, prostrate-ascending, oval leaves, 5 cm long at the most, with not transparent nervations like P. officinalis, floral bracts merged at the base (in P. officinalis the bracts are free). The plant blooms all year round and the pollen is carried by the wind (anemophilous pollination); by the fructification the perigonium wrapping the achene is long almost the double than the achene itself, whilst in P. officinalis slightly exceeds it. In Europe are present, in addition to the two species already mentioned, Parietaria lusitanica, P. cretica, P. mauritanica, P. debilis and the alien P. pensylvanica of North-American origin, naturalized in Germany and probably elsewhere. 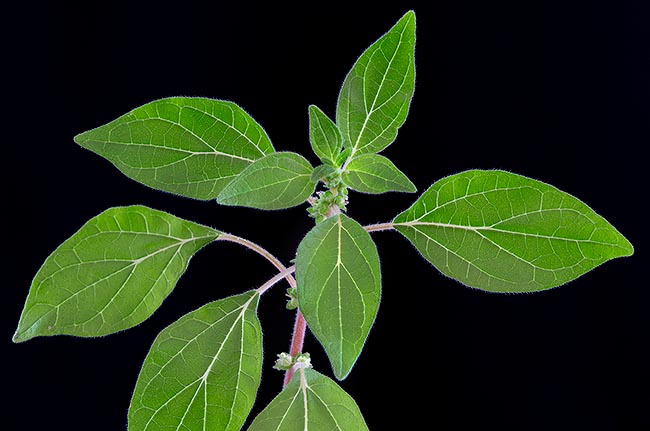 Once, the young girls, especially in the countries, were having fun in doing necklaces of lichwort leaves which adhered to the t-shirts; whilst their mothers placed the fragmented plants in the flasks and in the carboys with water and sand, as abrasive for cleaning them from the deposits of tartar and wine, hence the Italian local name of “erba vetriola” (glassy grass).

The boys, who were playing in the fields and were fishing into the ditches, did well know that if they got in touch with the nettles they could get relief mashing leaves and stems of lichwort and placing the mass obtained on the wheals caused by the annoying stings. For the medicinal purposes (diuretic, depurative, antidotical, cicatrizant, constipating-astringent, and antihemorrhagic) the whole plant is to be harvested during the flowering period, deprived of the roots and of the low part of the stems. The grass mainly contains potassium nitrate (saltpetre) and calcium nitrate, sulphur, mucilage, tannins, flavonoids and a glycoside, and is employed, as infusion or decoction, as diuretic. In the popular medicine, the suggest poultices of the fresh plant, chopped, for treating chronic dermatitis. I would like to remind that the pollen of the lichwort stands among those causing strong allergies in many persons (“hay fever”) and these ones must refrain from collecting and manipulating this plant or frequenting zones where this one abounds and is blooming. I indicate here below two simple preparations made from fresh lichwort:

Infusion useful for the bronchial catarrh, in the dropsy, in the renal and vesical calculi

Two teaspoonfuls of chopped plant in a pot of steaming water, for fifteen minutes; to filter, to add some lemon and honey and to consume after the meals.

Half teaspoonful of chopped plant in two spoons of honey. To consume split in four-five doses during the day.

→ To appreciate the biodiversity within URTICACEAE family please click here.

Parietaria officinalis was last modified: May 8th, 2020 by Giuseppe Mazza