The Apollo (Parnassius apollo Linnaeus, 1758) is a day-flying lepidopteran afferent to one of the six diurnal families of Rhopalocerans (Rhopalocera). In the specific, it belongs to the family of the Papilionids (Papilionidae).

Therefore we can, taxonomically, classify it in the group of phylum of the Arthropods (Arthropoda), class of the Insects (Insecta), order of the Lepidopterans (Lepidoptera), family of the Papilionids (Papilionidae) and genus (Parnassius).

The livery of this species, though original and characteristic, is quite variable, that is why several entomological biologists of the Royal Entomological Society assume the existence of various races or subspecies also geographical as well as biological, such as the Parnassius parnassius apollo. The nominal species differ from some subspecies, for instance, due to the absence of red dots on the pair of fore wings. The International Union for Conservation of Nature (IUCN) establishes nowadays its status as “Vu” = vulnerability; this has been one of the first invertebrates to get this status. 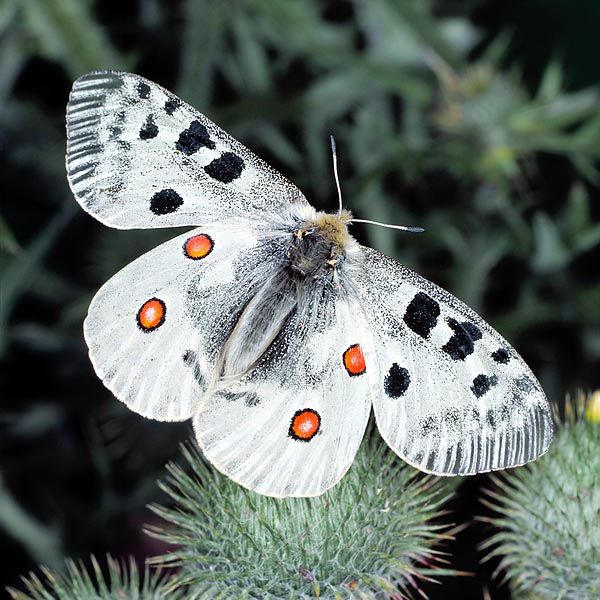 It is an electively mountain species.

It is found in the Spanish, French, Swedish mountain areas, going up to the Balkans and Greece and spreading also up to central Asia.

It mainly colonizes the valleys and the flowered mountain grasslands, where it is found, depending on the latitude, between the 500 and the 2400 m of altitude above sea level.

The males are smaller than the females, and the wingspan varies between 5 and 10 cm. The borders of the fore wings show a slight black dust, the antennae, grey and clavate, are ringed by dark in both sexes. Grey hairs are present at the rear end of the abdomen; the circular dots on the hind wings vary from red to orange yellow.

The caterpillar coming out from the eggs is velvety black, with a number of red-orange spots along the sides. It develops at expenses of succulent plants such as those belonging to the genera Sedum and Sempervivum.