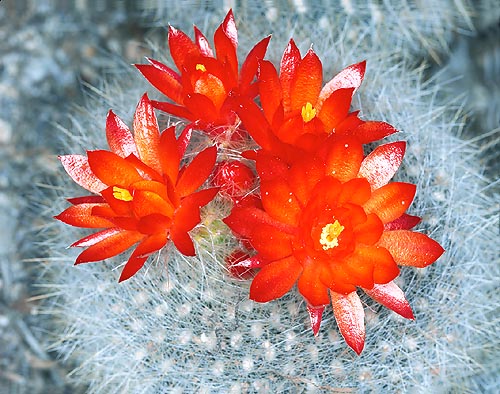 The genus is named after the Argentine botanist Lorenzo Raimundo Parodi (1823-1890); the species is honoured to its discoverer, F. von Haselberg.

Succulent plant, usually solitary with a green grey epidermis, globose with slightly depressed apex, with a diameter of 4-15 cm.

The stem has 30-60 spiralled ribs little evident with small tubercles and areolas, woolly when young, distanced of 4-6 mm; the areolas are provided with 20-30 thin radial thorns, rigid, of an almost transparent white colour, and with 3-5 yellowish white central thorns, 10-15 mm long.

The flowers, grouped close to the apex, are funnel-shaped, 15 mm long and 25 mm of diameter, with orange red or orange yellow tepals, the outer ones are open, the inner ones erect. The fruits are spherical or oblong, with a diameter of 10 mm, thorny, yellowish white, and contain several small black tuberculated seeds. There is another subspecies known: Parodia haselbergii subsp. graessneri (K. Schum.) Hofacker & P. J. Braun (1998), where the most evident differences stand in the greater number of radial thorns, up to 60, of a yellowish colour, and the greenish yellow flowers.

Very popular and appreciated plant by the collectors, due to its reduced size, its thorns, which almost hide the surface of the stems, and the showy long lasting blooming, the single flowers can remain open for two and more weeks; particularly suitable, due to the facility of its cultivation, for those beginning to get fond in the cultivation of the cacti.

It is to be cultivated in full sun, or slight shade, on preferably acidic and particularly draining soils, which can be formed by about the 50% of earth rich of humus and for the remainder of siliceous coarse sand. In summer, during the vegetative period, it is to be regularly watered, but allowing the soil to dry up completely before giving water again, in winter it is to be kept dry, and with rather low temperatures, but not lower than +5 °C, this resting time, cold and dry, is indispensable for getting a good blooming.