The surprising strategies of Passion flower. In it’s corolla there is the entire symbology of Crucifixion : the crown of thorns, nails, hammers and even the lances of the warders. Reproduction of this strange plant. History and medicinal properties. 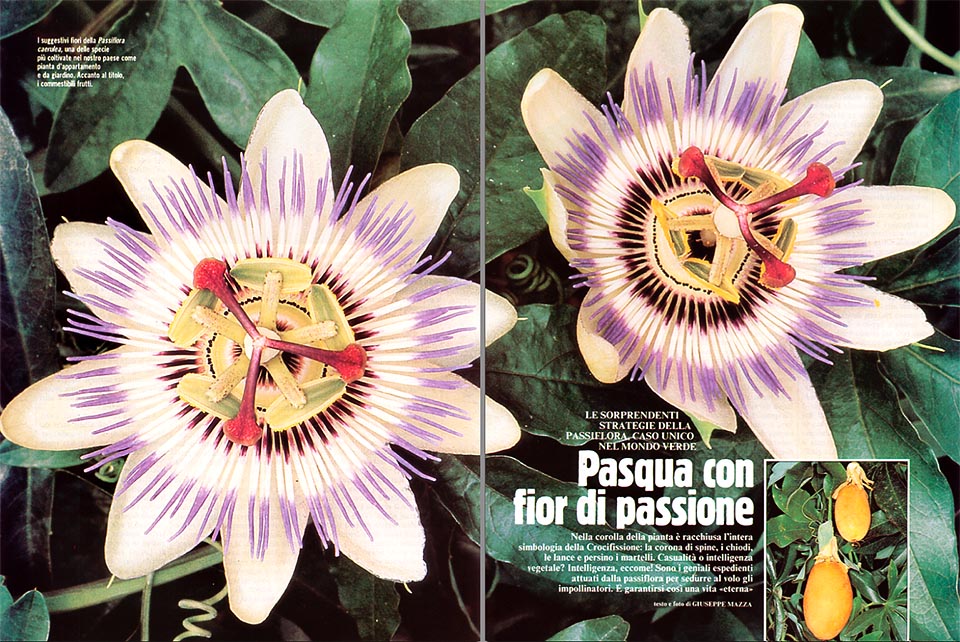 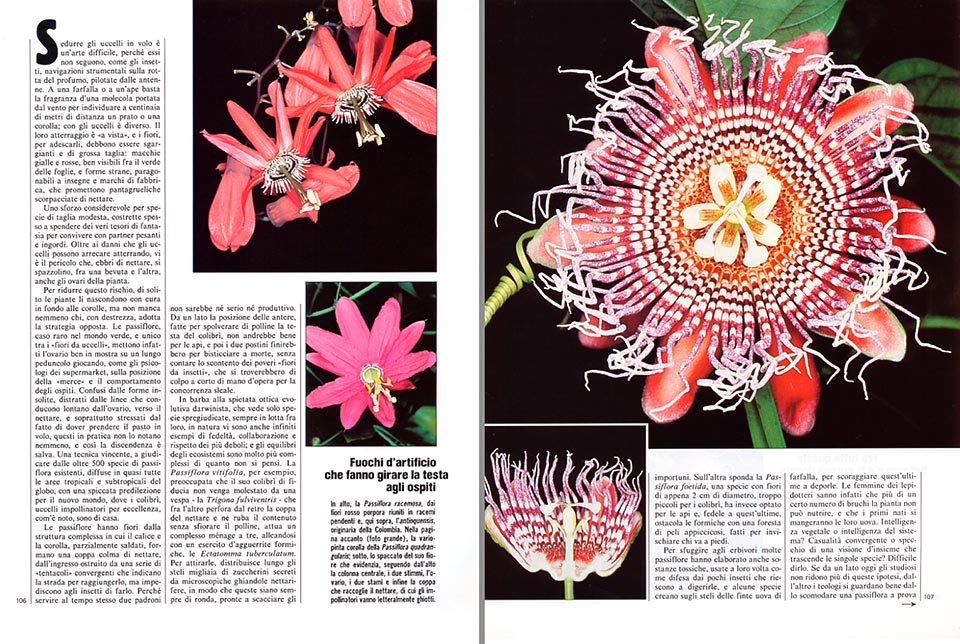 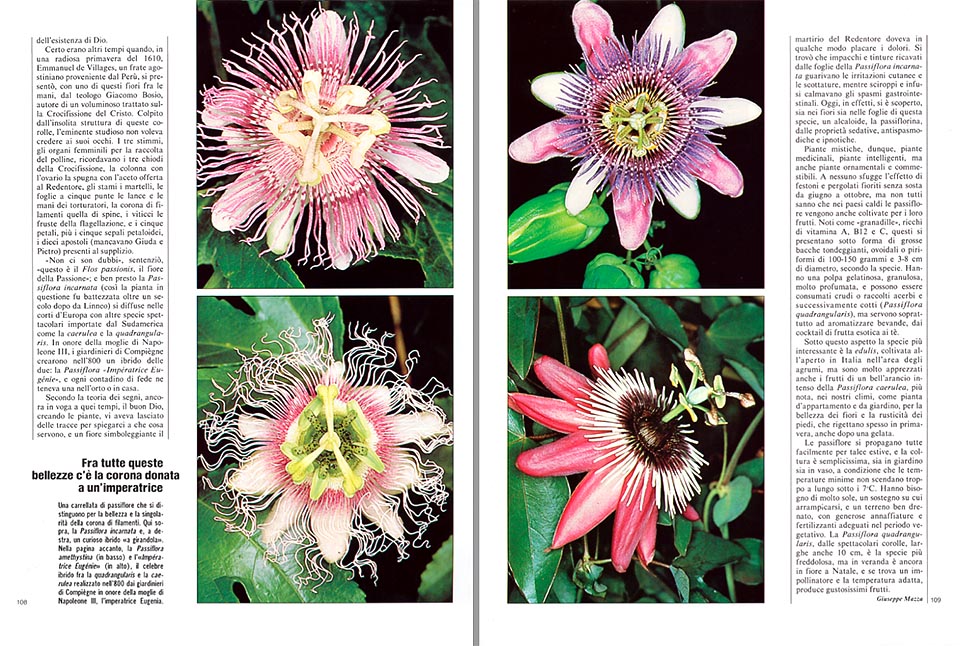 It’s a difficult art to seduce flying birds, as they do not follow, like the insects, instrumental navigations “by scent”, driven by the antennas.

For a butterfly or a bee, it is sufficient the fragrance of a molecule carried by the wind, to locate, hundreds of metres far away, a lawn or a corolla; with the birds it’s another story.

Their landing happens “by sight”, and the flowers, in order to entice them, must be showy and of big size. Yellow and red spots, well visible between the green of the leaves, and unusual forms, comparable to signboards and trademarks, which promise and memorize, without misunderstandings, Pantagruelian bellyfuls of nectar, proportionate to the appetite of the guests, which is really unappeasable.

A substantial effort for modest size species, often compelled to spend real treasures of fantasy to cohabit with heavy and voracious partners, with a bottomless stomach.

In addition to the damages that the birds can cause while landing, there is always, in fact, the risk that, intoxicated by the nectar, they devour, between a drink and another, like caviare canapés, also the ovaries of the plant.

In order to reduce this risk, usually, the plants hide them with care under the corollas, where there are less chances for them to end up in a salad, but there are also those, who, skilfully, adopt an opposite strategy.

Passion flowers, rare instance in the Green World, and unique, in the “birds flowers”, place in fact the ovary well in evidence on a long peduncle, speculating, like the psychologists of the super markets, on the position of the “merchandise”, and the behaviour of the guests.

Muddled by the unusual forms, distracted by the lines which lead far away from the ovary, towards the nectar, and, above all, stressed by the fact of having to take the meal while flying, due to the lack of places where to lean, they practically do not even notice it, and so the offspring is saved.

A gaining technique, if we consider the more than 500 species of passion flowers existing, spread in almost all tropical and subtropical areas of the world, with a marked predilection for the New World, where, as known, the humming-birds are of the family.

Flowers with a complex structure, where the calyx and the corollas, partially united, form a goblet full of nectar, with the entrance obstructed by a succession of converging “tentacles”, which indicate the way to reach it, but do not allow the insects to do the same.

This, because serving two masters at the same time should not be neither serious nor productive.

In one way, the position of the anthers, suitable for painting of pollen the head of the humming-birds, would not be good for the bees, and then, the two “postmen”, would end up in quarrelling to death, without considering the grumbling of the poor “flowers insects”, which would be, suddenly, lacking of man-power, due to the unfair concurrence.

In spite of the pitiless Darwinian evolution theory, which sees only “unscrupulous” species, always struggling between them, in nature there are also endless examples of faithfulness, collaboration, and respect for the weakest; and the equilibria of the ecosystems are much more complicated than what is currently thought.

The Passiflora vitifolia, for instance, worried that its own humming-bird does not get too much disturbed by a wasp, the Trigonia fulviventris, which, among other things, pierces from the back the cup of the nectar, and robs its contents without even skimming the pollen, puts in effect a complicated triangular ménage, forming an alliance with an army of trained ants, the Ectatomma tuberculatum.

For attracting them, it distributes, along the stems, thousands of sweets secreted by microscopic nectareous glands, in such a way that these ones are always around, alert and ready to disperse the intruders.

On the other hand, the Passiflora foetida, a species with flowers of only 2 cm of diameter, too small for the humming-birds, has, on the contrary, opted for the bees, and, faithful to these ones, hampers the ants with a forest of sticky hair, done expressly for entangling, inexorably, those who come by walking.

For escaping from the herbivores, many passion flowers have also elaborated toxic substances, utilized, in their turn, by the few insects which are able to digest them, as defence, and some species create even some fake butterfly eggs on the stems, in order to discourage them to lay theirs own there.

The females of the lepidoptera know very well indeed that the plant cannot nourish more than a certain number of caterpillars, and that the first born will eat their eggs, like cream puffs, between a leaf and another.

Converging casualness, or the mirror of a vision of the whole, which transcends the single species? Difficult to say.

If, on a side, nowadays the scholars, do not laugh any more for these hypotheses, on the other hand, the theologians are very careful not to abandon their paths and not to bother a passion flower for proving the existence of God.

By sure, they were different times, when, in a luminous spring of the year 1610, Emmanuel de Villages, an Augustinian friar, coming from Peru, reported, carrying one of these flowers in his hands, to the theologian Giacomo Bosio, author of a ponderous volume about the crucifixion of the Christ.

Struck by the unusual structure of these corollas, between the animal and the vegetable, which lend wings to the fantasy, the distinguished scholar could not believe to his eyes. The three stigmata, the feminine organs for collecting the pollen, were recalling the three nails of the crucifixion, the column with the ovary, the sponge with the vinegar offered to the Redeemer, the stamens, the hammers, the five pointed leaves, the lances and the hands of the torturers, the crown of filaments, the thorny one, the tendrils, the whips of the flagellation, and the five petals plus the five sepals, the ten apostles (Judas and Peter were not included), present at the torture.

There are no doubts, he said, this is the “Flos Passionis”; and soon the Passiflora incarnata (in this way the plant in question was named by Linnaeus, more than a century later), spread in all the courts of Europe, with other spectacular species imported from South America, as the Passiflora caerulea and the Passiflora quadrangularis, with the unusual square sectioned stems.

As homage to the wife of Napoleon III, the gardeners of Compiègne created also, in the nineteenth century, a hybrid of the two: the Passiflora “Impératrice Eugenie”, and every faithful countryman, was keeping one specimen of that in the orchard, on the wall of the house, or behind the window, as a sign of reverence and protection.

After the theory of the signs, still in vogue in those times, the good Lord, while creating the plants, had left there some traces for explaining us what is their use, and a flower symbolizing the martyrdom of the Redeemer, had, in some way, the property to calm down the pains.

They found that compresses and tinctures obtained from the leaves of the Passiflora incarnata were curing the skin irritations and the scalds, while syrups and infusions were calming the gastric-intestinal spasms.

And, nowadays, indeed, they have discovered either in the flowers and in the leaves of this species, a particular alkaloid, the passiflorine, with sedative, anti-spasmodic and hypnotic properties, useful also in the states of anxiety and of cardiac neurosis.

Nobody cannot avoid to notice the ornamental effect of festoons and pergolas full of flowers, incessantly, from June to October, but not all know that, in the warm countries, the passion flowers are also cultivated, alike bananas and pineapples, for their fruits .

Known as “granadilles”, rich of vitamin A, B12, and C, these look as big roundish egg-shaped or pyriform berries, of 10-150 grams and 3-8 cm of diameter, depending on the species. They have a jelly-like pulp, granular, very perfumed, and can be eaten raw, or picked up unripe and cooked like courgettes (Passiflora qudrangularis), but they are used mainly to aromatize beverages, from the exotic fruits cocktails to the perfumed teas, competing with those, more traditional, at the jasmin and the bergamot.

Under this point of view, the most interesting species is, as the name suggest, the Passiflora edulis.

All the passion flowers propagate easily by summer cuttings, and the cultivation is very simple, either in the garden or in pot, on condition that the lowest temperature never drops for long time below the 7 °C.

They require a lot of sun, a support where to clamber, and a well drained soil, with generous watering and adequate fertilizers during the vegetative time.

The Passiflora quadrangularis, with its incredible corollas, wide even 10 cm, is the species which feels more the cold, but in a veranda, it can be still in flower by Christmas, and if it find a pollinator and a suitable temperature, it produces very tasty fruits, long even 20 cm.