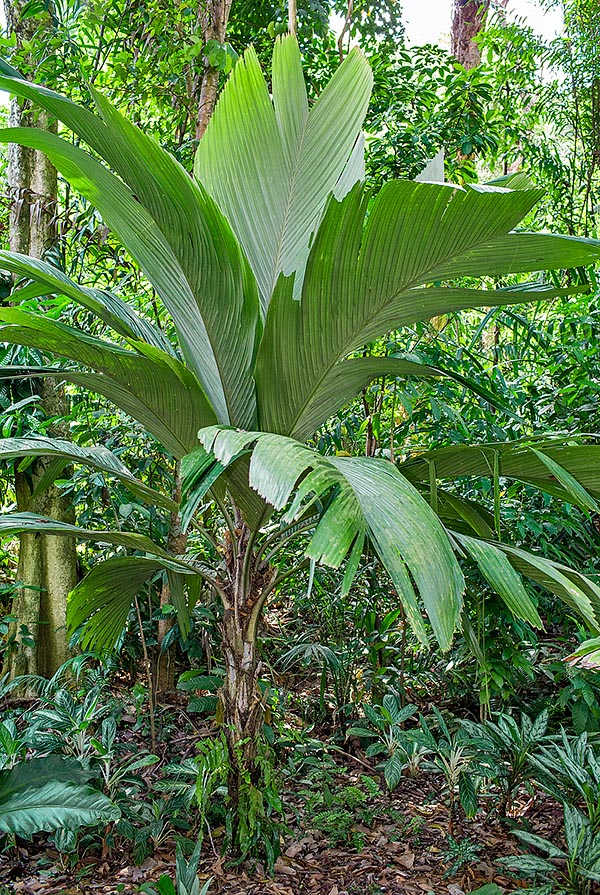 The species is native to the Marquesas Islands (Nuku Hiva) where is present with very few specimens in the underwood of the pluvial forest in a valley (Taipivai) at about 100 m above sea level.

The name of the genus is the combination of the Greek substantives “πέλαγος” (pélagos) = sea and “δόξα” (doxa) = glory, with reference to the place of origin, an island the Pacific Ocean; the species was dedicated to its collector, Charles Henry.

The Pelagodoxa henryana Becc. (1917) is an unarmed monoecious species with solitary stem, erect, up to 6-8 m tall and of 10-15 cm of diameter, of pale brown colour on which are visible the drawn near rings of the foliar scars. The leaves, on a 30-60 cm long petiole, are flabellate, undivided with bifid apex, plicate, 2-3 m long and 1-1,2 m broad, of glossy intense green colour above, covered by a thin grey tomentum below; the foliar base, with fibrous margins and covered by a thick tomentum, embraces only partially the stem in the outer leaves. Ramified inflorescence among the leaves (interfoliar), 30-60 cm long, tomentose, with unisexual flowers arranged in triad (a female flower between two male ones), but in the terminal part of the rachillae where are present only male flowers, solitary or in couple. The inflorescence displays the phenomenon of the proterandry, the male flowers ripe before the female ones, this for favouring the crossed fecundation. Spherical fruits covered by pyramidal corky tubercles of greenish brown colour, of 6-15 cm of diameter, containing only one globose seed of 3-6 cm of diameter.

It reproduces by seed, that is not easy to find, in organic draining loam maintained humid at the temperature of 28-30 °C, with germination times of 3-4 months.

One of the most ornamental palms by far, but rare and of not at all easy cultivation, requires a humid tropical climate with high and constant temperatures and ambiental humidity, deep soils, draining, rich of organic substance, maintained constantly humid, and a shady position and totally sheltered from the wind, to maintain the leaves undivided. Of great effect also when cultivated in pot, for the decoration of open air spaces, where the climate allows so, greenhouses, verandahs and luminous inner spaces, with values of temperature which are good not to descend under the 18 °C and high ambiental humidity. The waterings must be regular and abundant, especially in presence of high temperatures, but without stagnations, and the fertilization done with hydrosoluble products balanced with microelements.

Due to the reduced number of specimens, concentrated in a small area, the species has been inserted into the red list of the IUCN (International Union for the Conservation of Nature and Natural Resources) as “Critically Endangered” (at very high risk of extinction in nature in the immediate future).