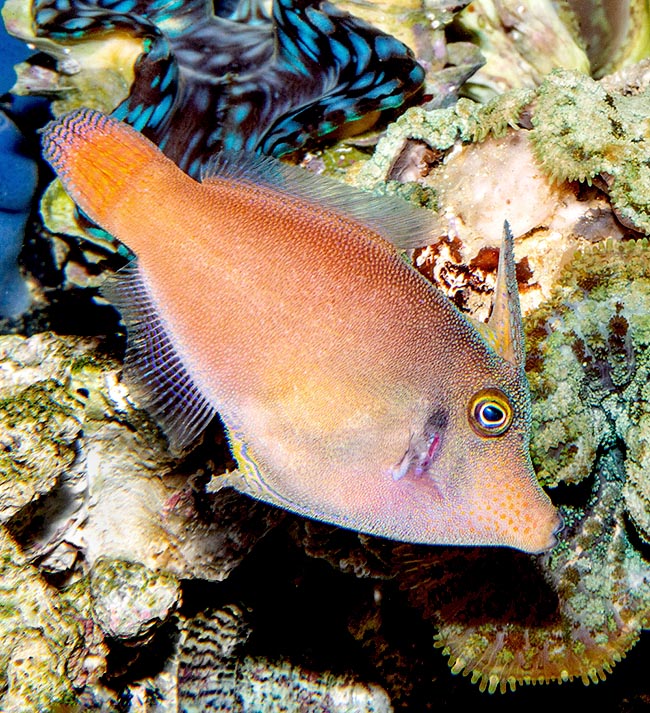 Pervagor aspricaudus (Hollard, 1854) belongs to the class of the  Actinopterygii, the ray-finned fishes, to the surprising order of the  Tetraodontiformes,  and to the family of the Monacanthidae that has 28 genera and about more than one hundred species, vulgarly known as Filefishes, due to the roughness of their skin.

The name of the genus Pervagor has origin from the Latin “vagor” = to wander, to err, to go here and there, with the prefix “per”, that reinforces the concept, with reference to their continuous wandering and uncertain swimming.

The specific epithet aspricaudus is born from the Latin “asper” = rough, and “cauda” = tail. Hence, it is a fish having a rough tail.

Pervagor aspricaudus is a species of the tropical Indo-Pacific. Starting, eastawards, from Réunion and Mauritius islands, we find it in the Maldives. Then, it reaches the Cocos Islands, Christmas Island and Australia. Further north, it is present in the Philippines and in Vietnam, then in Taiwan, in Ryukyu and in southern Japan, which is the northern limit of the species. Southwards, it has colonized the coasts of New Caledonia, and, eastwards, we find it in the Marshal and Tonga islands ending then in the Hawaii Islands and in French Polynesia.

It goes swimming in quite shallow waters, usually between 1 and 25 m of depth, among madrepores and rocks rich in ravines where to hide. As a matter of fact, it is very shy, and being uncertain with its swimming, it cannot live far from a shelter.

Pervagor aspricaudus can be 13 cm long. The body is flat, covered by the typical tiny spines of the filefishes, and if it were not for the colour, however very variable, it should have the same look as the Pervagor janthinosoma. Except that here is the yellow to predominate on the blue, more or less present on the snout, even if there are not missing specimens with grey or pinkish tones. The British call it Filefish Orangetail, that is, Filefish with orange tail, and actually this is a relatively constant characteristic of the species. 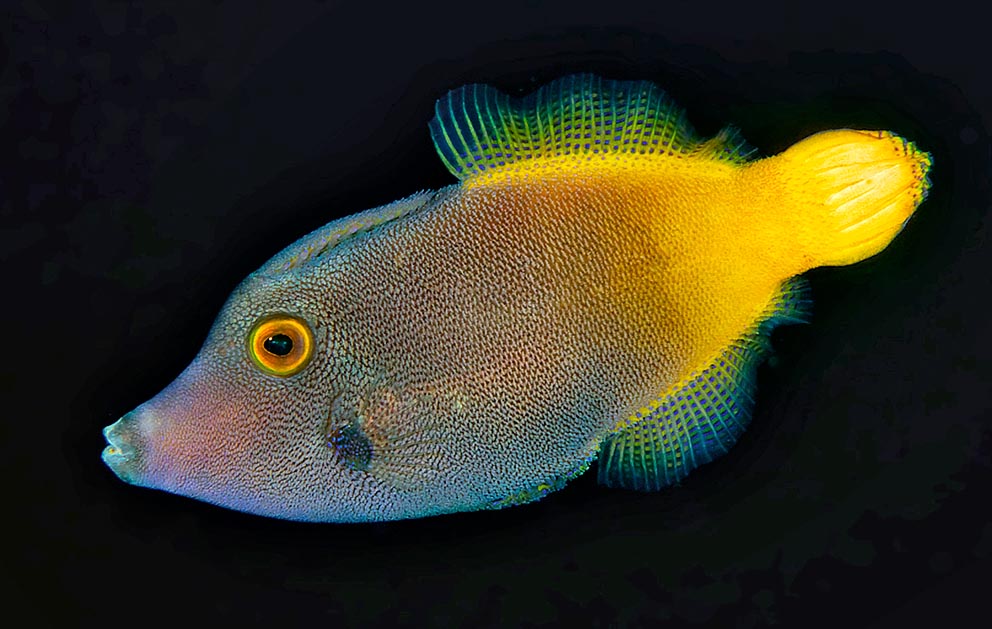 Rough to touch, especially by the tail, has the first dorsal fin formed by the spines merged in a solid stiletto, folded while swimming in a suitable housing © Keoki Stender

Above the eyes, with brown or orange iris, stands out the first dorsal fin that has turned in an erectile stiletto, kept folded, while swimming, in an appropriate lodging, as typical in the Monacanthidae and in the Triggerfishes, close relatives in the order of the Tetraodontiformes but of much larger size. This is a small dagger by sure not appreciated by the stomach of the predators. To memorize it, it is immediately straightened up before the intruders, while the chin strap is stretched up to the tiny atrophied pelvic fins, to visually increase the size of the fish.

The caudal fin, also stretched in these circumstances, is usually kept closed. Yellow or orange, it displays, opening, elegant patterns with luminous radial spine and a showy dotting forming parallel borders. Also the head and the snout, elongated to look for the food into the ravines, have more or less dottings or mall traits. 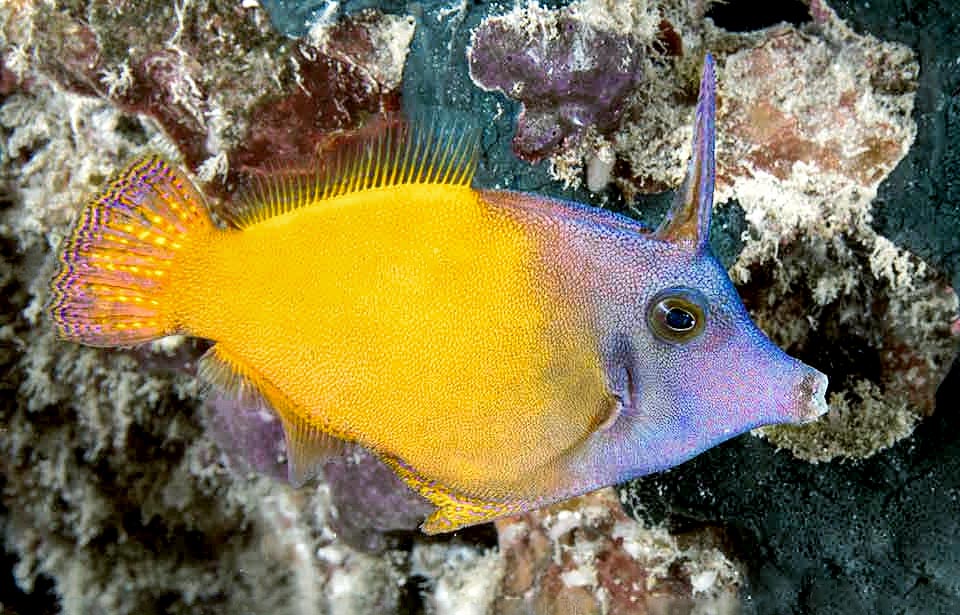 Here in all its splendour, dagger raised, the caudal fin open and the belly lying in an intimidating position © Paddy Ryan

As the specific name states, the prickliness of the scales increases towards the tail, and also the dorsal stiletto, usually dark brown, shows, like a saw, an evident prickliness on the sides. 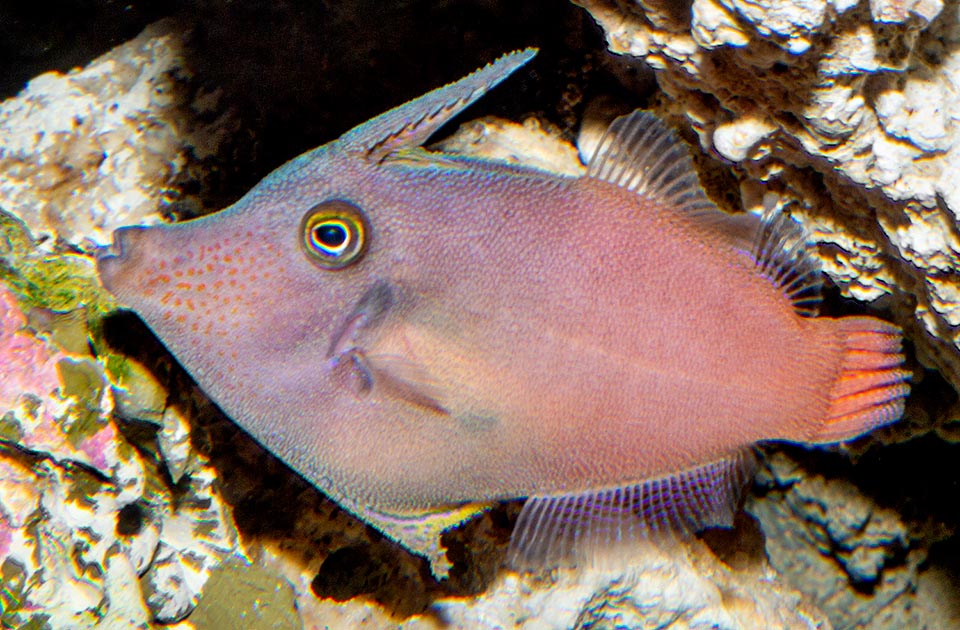 Specimen with pink tones. Note the dotting on the snout and in the spine on the dissuasive stiletto arranged in a saw © Giuseppe Mazza

Pervagor aspricaudus nourishes of plankton, benthic algae and of small invertebrates it finds exploring continuously the ravines. It is a shy fish, difficult to observe, and often as is the case for the congeners, it seems that the females chose, for spawning, particularly toxic algae, poorly frequented by the herbivores. After the fecundation, the eggs are cared for, until their opening, by both parents.

Despite their small size and their splendid livery, they are fishes not suitable for the domestic aquaria, like all the Pervagor.  Apart from feeding problems, they do not stand the coming and going of a house, and if they are to be changed of pool, their spiny coat is caught in the meshes of the landing nets with serious stress and damages to the animal when later on it must be forcefully detached with the hands. 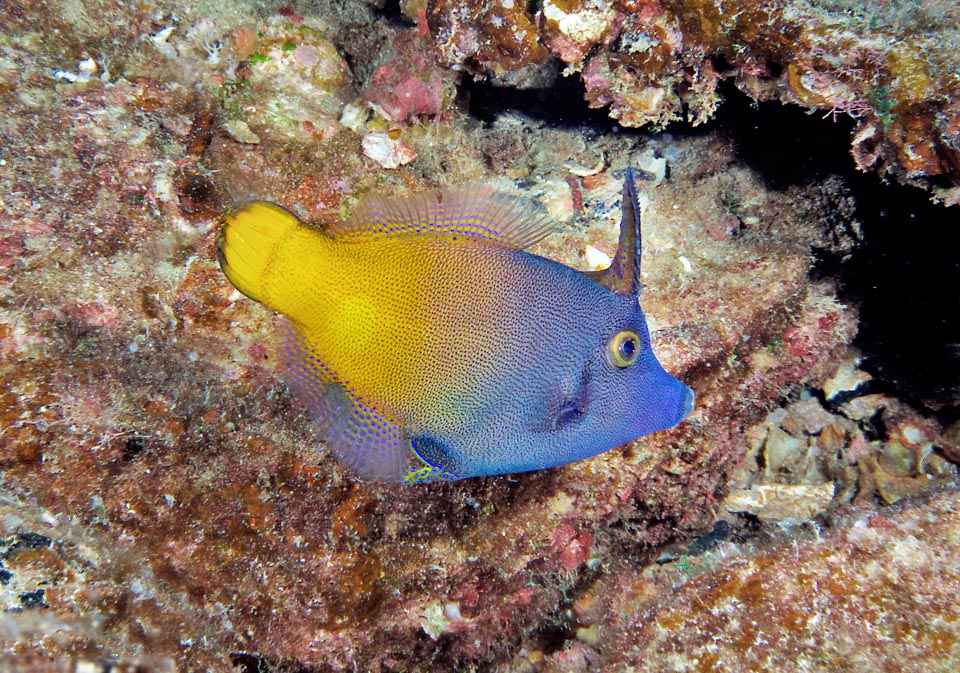 When purchased and in these cases, it is then necessary to introduce them delicately in a submerged container and taken them with the water.

Luckily, it is not an endangered species. The resilience is excellent, with a possible doubling of the populations in less than 15 months, and the vulnerability index is presently (2020), decidedly low, marking only 20 on a scale of 100.