The species is native to Andaman Islands, Assam, Bangladesh, India, Myanmar, Nicobar Islands, Peninsular Malaysia, Singapore, Sumatra, Thailand and Vietnam where it grows along the banks of the water streams, of the swamps and along the coasts at the inner margins of the mangrove forests periodically flooded by brackish water, in particular it covers with an impenetrable vegetation many islands of the delta of Ganges. The name of the genus is the Greek name given in the old times to the date palm; the name of the species is the Latin adjective “paludosus, a, um” = swampy, with obvious reference.

The Phoenix paludosa Roxb. (1832) is a dioecious species (each individual carries either only male flowers or only female ones), thickly cespitous with erect or curved stems, 2-5 m tall and 5-8 cm of diameter, of reddish brown colour with the dry leaves persisting for long time under the crown whilst in the free part are visible the rings trace of the junction of the fallen leaves space of about 5 cm each other; at the base it has a mass of exposed roots. The leaves, up to 20 per stem, are pinnate, curved, 1,5-2,5 m long, with brown basal sheath reduced to a net of rigid fibres, pinnules inserted regularly or in groups of 2-4 on the rachis at two different angles, ensiform, 30-40 cm long in the median part and up to about 2 cm broad, rather flabby, green above, greyish below, the basal ones reduced to robust needlelike spines up to 12 cm long. 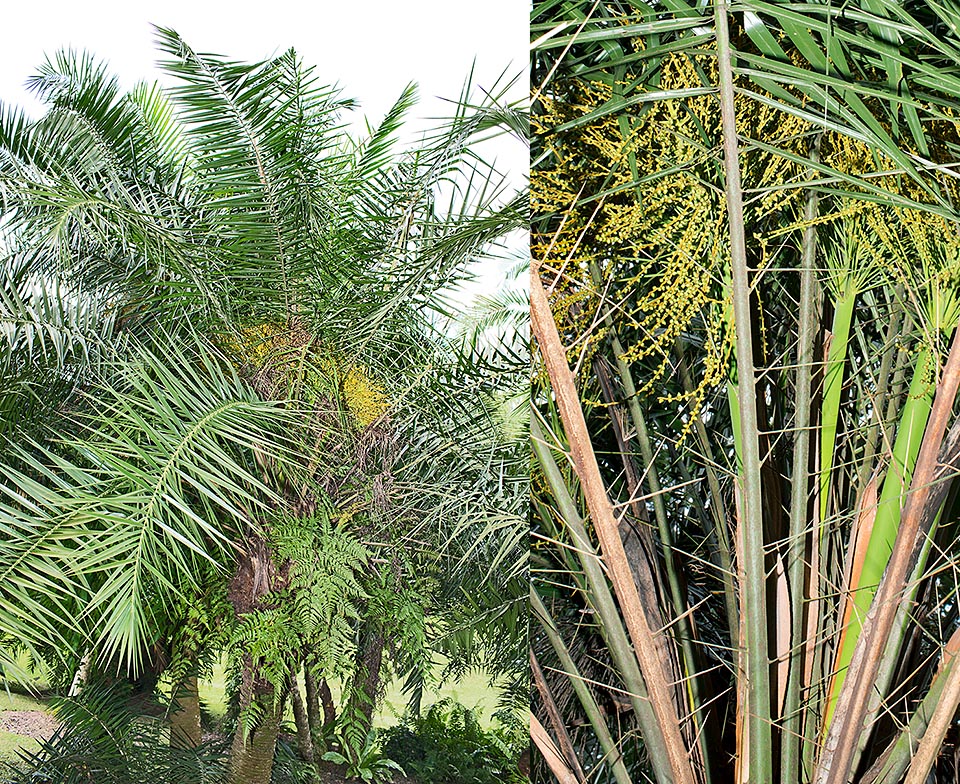 Cespitous, even 5 m tall, Phoenix paludosa grows in South-East Asia along rivers and in the dense mangrove forests periodically flooded by brackish water. Once diffused, is endangered by the anthropization and little cultivated in gardens due to the dangerous needly basal pinnules visible in the right side close-up © Mazza

The very ramified, erect, inflorescences develop among the leaves wrapped during the initial phase of growth inside a yellowish, about 45 cm long spathe, the male inflorescences are 45-60 cm long with flowers having a corolla formed by three about 7 mm long petals united at the base in the receptacle which supports the six stamina, female inflorescences long, in fruit, up to more than 1 m, with flowers having the corolla formed by three free petals, about 3 mm long, roundish and concave. The fruit is an ellipsoid berry, 1-1,2 cm long, of blackish purple colour glossy when ripe; the seed is ovoid, 0,9-1 cm long and of 0,6 cm of diameter, with embryo placed close to the base.

It reproduces by seed in sandy loam maintained humid at the temperature of 22-24 °C, with germination times of 2-4 weeks.

Initially much diffused species, but which nowadays in some origin areas is seriously endangered due to the increasing anthropization, cultivable in the humid tropical and subtropical climate zones on soils maintained constantly humid as it does not bear drought periods; it does not tolerate temperatures around the 0 °C if not exceptional and for very short period. It has a fairly good ornamental value, but is rarely employed under this profile, to utilize in parks and gardens by the borders of water surfaces, but far from passageways due to the needlelike fibres and basal pinnules. In the origin places the leaves are used as cover and the stems for fences and in the rural constructions.