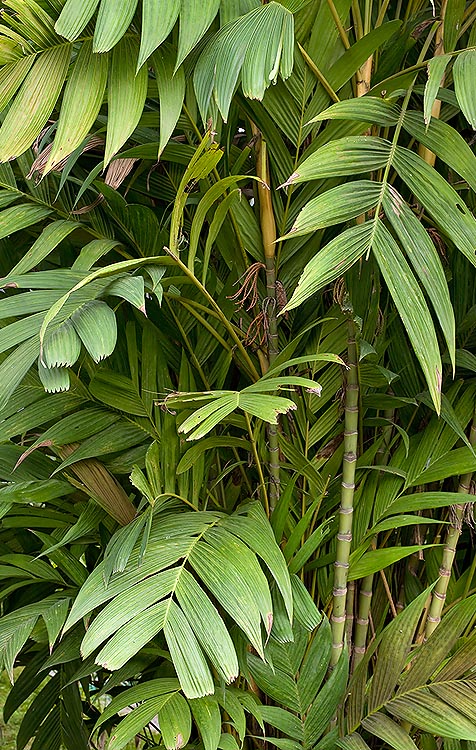 The Pinanga coronata is a tropical caespitose palm with 2-3 m stems © G. Mazza

The plant is native to Andaman Islands, Java, Lesser Sunda Islands and Sumatra, where it grows in the pluvial forests from the sea level up to more than 1.000 m of altitude.

The Pinanga coronata (Blume ex Mart.) Blume (1839) is a caespitose, monoecious plant, rather variable, with erect stems, 2-5 m tall, with a diameter of 3-5 cm, smooth, of green colour on which stand out the rings trace of the junction of the fallen leaves.

The leaves are pinnate, usually ascending, 1,5 m long on an about 30 cm long petiole, of intense green colour and subdivided into pleated segments, about 25-70 cm long and of variable width, with sharp or truncated and toothed tip; the leaves, when opening, are often pink with light dots. The basal sheath of the leaf, of yellowish green colour, wraps wholly the stem for a length of about 30-50 cm.

The inflorescences come out under the leaves, are about 30 cm long, ramified and hanging, of pink colour tending to the coral red when in fruit; the flowers, disposed in the classical triad (one female between two male flowers), and are small and cream-white.

The ovoid fruits, placed on two opposite rows, are about 12 mm long, of red colour turning to black when ripe. It reproduces by seed and by division; the seeds germinate in 1-3 months at the temperature of 24-28 °C.

Plant of remarkable ornamental value, it stands among the most cultivated Pinanga, utilizable in the tropical, subtropical and, marginally, warm temperate climate zones, in semi-shaded position and in fertile soils, slightly acidic or neutral, perfectly draining and kept constantly humid; it is rather sensitive to the low temperatures as it rarely bears, and for a very short time only, temperatures just under the 0 °C.

It is cultivable also in pot for the decoration of luminous interiors, utilizing substrata rich of organic substance, with addition of coarse and agriperlite, around the 30%, for improving the drainage; temperatures are good not to be lower than 14-16 °C.