Pinanga malaiana (Mart.) Scheff is distributed in Malaysia, Borneo, Sumatra and Thailand. It can be found in the undergrowth of the plain and mountain humid forests, up to 800 m of altitude.

Pinanga malaiana is a monoecious species, caespitose, rarely single-stemmed, that produces medium-sized bushes, up to 7 m tall and 5 m broad. The thin stems, similar to bamboo canes, are 4-5 m tall, with a diametre of 7 cm, of dark green colour, marked by grey or brown rings, scars of the fallen leaves, spaced even more than 10 cm. At the base of the stems often stands the cone of short aerial roots that serve to stabilize the plant. The crown is formed by 5-8 pinnate and arcuate leaves, up to 2 m long, composed of 18-20 flat pinnulae, symmetrically arranged in respect to the rachis in one only level. 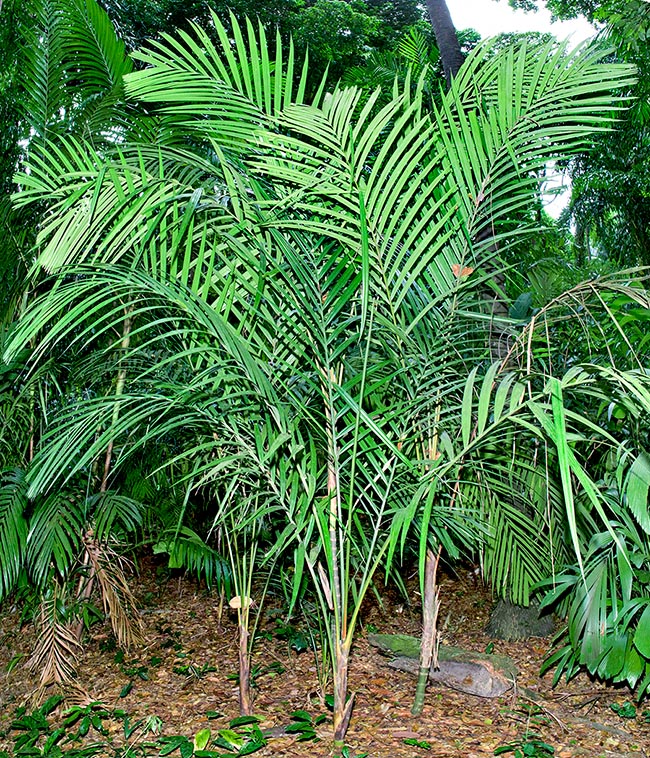 Pinanga malaiana is native to South-East Asia forests where it reaches, on a thin stem, 7 m of height, with a 5 m crown. In cultivation needs a high atmospheric humidity and does not bear cold and strong winds © Giuseppe Mazza

The smooth tubular petioles are 35-45 cm long and have a colour varying from brown to green, finally yellow/orange. They end in a sheath totally wrapping the stem, of colour variable from blue/green to yellow/orange, widely suffused in brown/violaceous shades.

The inflorescences are interfoliar, initially protected by a caduceus bract, and emerge in correspondence to the rings on the stem, bent downwards. They are 18-22 cm long and are ramified on 3-5 rachillae initially green, then yellow and finally bright red when the fruits are ripe. The flowers are arranged in the characteristic triads formed by 2 male flowers and one female, of yellow/cream colour.

The fruits are arranged regularly on the rachillae in two lines, very close together. They are ovoidal with pointed extremities, and are initially green, then red, finally black when ripe. They are up to 2,5 cm long and up to 1,2 cm broad, with a satin surface. The fruit contains only one seed. It can be reproduced by division of the tufts, or, more easily, by seed that germinates in 1/3 months, placed in loam rich in organic substance at a warm temperature of 26/28 °C.

Pinanga malaiana is a very ornamental species due to the elegant posture as well as due to the lively colour of the petioles, the sheath and the inflorescences. It may be a focal point in the composition of gardens reproducing the tropical undergrowth. Due to these characteristics, it is very much sought by the collectors, but actually is not yet very diffused in cultivation and can be admired in the botanical gardens of South-East Asia. It is essentially a tropical species and can be cultivated in climates where the temperature does not reach 0 °C, if not rarely and for a very short period. Being a species native to the undergrowth of the pluvial forests, Pinanga malaiana needs a lot of atmospheric humidity and does not like the winds, especially the dry ones that can lead the plants to dehydration and to death. It loves the shady positions and does not appreciate the direct sun rays, as they can burn the leaves. The soil must be rich and kept always humid because the plants do not like drought, but at the same time it must also be perfectly draining in order to avoid water stagnation and the roots’ rottenness. For this purpose, we can add sand and agriperlite to render it more porous.

In the origin areas, natives are used to utilize the plants as antiseptic.