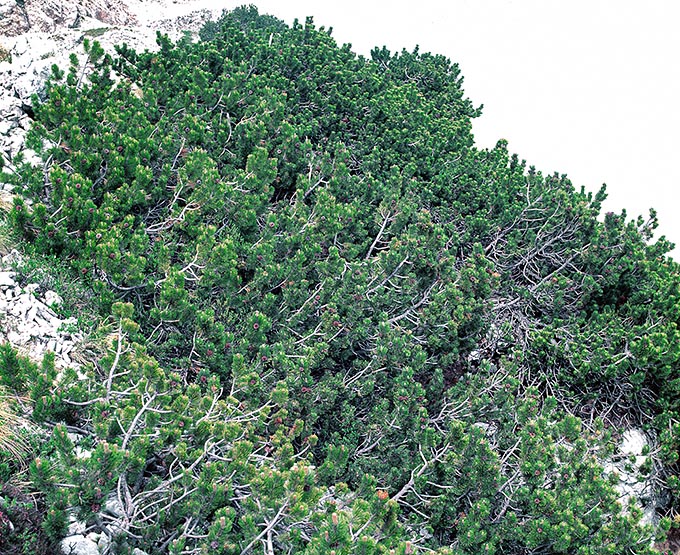 The tangled Pinus mugo has an orophyte-Euro Asian distribution, up to 2700 m of altitude © Giuseppe Mazza

The genus Pinus includes about a hundred of species distributed in the northern hemisphere; only one of them crosses, even if not too much, the Equator: the Pinus merkusii in Sumatra.

Apart a few species with shrubby habit (Pinus mugo, Pinus pumila, etc.) prevail the arboreal plants on which dominates Pinus lambertiana that is more than 80 m tall and grows on the reliefs along the coasts of the Pacific Ocean with other great conifers such as Sequoiadendron giganteum, the true American giant sequoia that passes the 130 m of height!, and Pseudotsuga menziesii or Douglas fir, reaching the 100 m of height.

In Europe 14 species of pines grow spontaneously but there is also a dozen of them of more or less American origin distributed in many European countries, imported there for getting wood or for ornament.

The genus Pinus should come from the Sanskrit word “pitu” (in Greek pytis), resinous, hence the Latin name “Pinus” cited by Pliny, Virgil and Al. Other authors date back the etymon to a Celtic term meaning mountain, rock, due to the habitat of many species of the genus, or to a Latin “pix, pìcis”: pitch or resin. In mythology, the pine is dedicated to Neptune because its wood was employed in the shipbuilding.

The name mugo of the species should come from the old French “musguét”: lily of the valley, and this is the diminutive from the Arabic “musk” = musk (Siberian cervid provided with odoriferous glands), due to the aromatic and resinous smell of the leaves, of the cones and of the wood of the plant.

The Mountain pine (Pinus mugo Turra, 1764) has an Orophyte-Euro/Asian distribution. Alps, relict locations on the northern Apennines, Campania and Abruzzo; mountains of Central Europe, various areas scattered in the Carpathians, Bulgaria and Pyrenees, from the mountain plan up to the sub-Alpine plain (1550-2700 m), but in the valleys is going down to reach the plain. 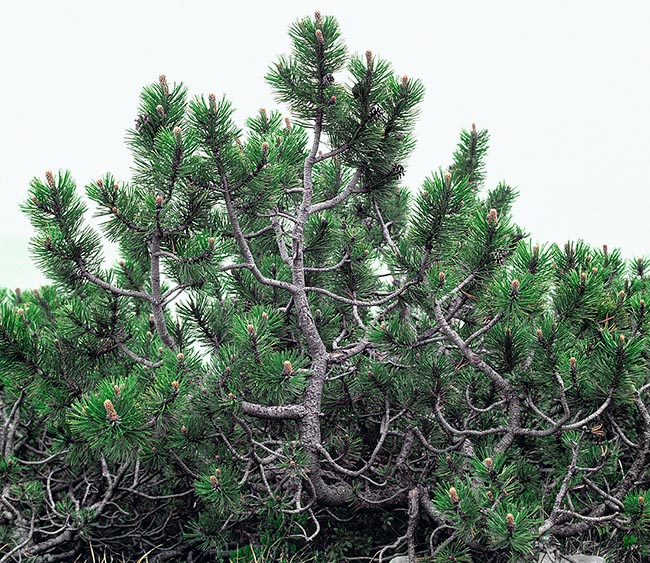 It is a polycormic shrubby species, 2-5 m tall, with often clinging branches, shaped by the snowpack weight © Giuseppe Mazza

It is a species microtherm, xerophilous, heliophilous, basiphilous (loves the calcareous-dolomitic soils, where is vicariant of the oxyphilous green alder), and pioneer on cliffs and screes and also in acidic and peaty locations. It is very frugal and resistant to the toxic elements present in the soil and, thanks to the dense and low cover and to the capacity of multiplying by offshoot through the rooting of the branches creeping on the ground, very resistant to the invasion of other species.

Is used in high mountain reforestation especially for the hydrogeological defence.

The most distinguished Professor Valerio Giacomini described in this way the scenery of the trees and of the twisted shrubs:

“Crossed now the upper limit of the forests opens to the gaze the vast altitude Alpine world, open, luminous, with its vast horizons of prairies and mountains.

Here begins the domain of more humble but most tenacious vegetation, forming verdant prairies, reddish moors, and small colonies of dwarf willows. Very few are now the most conspicuous protagonists that still impose their arboreal or shrubby presence in this dramatic landscape, the whimsical shapes of the rocks, the foaming waters, the snows and the glaciers. The few arboreal plants that well enter this landscape have a singular habit, well adapted to the severity of the cold, windy and with long showy winter climate: these are the so-called “twisted trees”, lying on the ground and resurgent with twisty and robust ramifications. Typical examples are the mountain pines, called also mugo pines, forming often impenetrable thickets. Also some shrubs gather to form a los but robust shrubby vegetation at these altitudes: especially the rhododendrons that often associate with thick carpets of blueberries”.

The mugo pine, note also as mountain pine, dwarf mountain pine, is a polycormic, brushy species, 2 to 4 (5) metres tall, with lying branches, ascending towards the apex (shapng due to the snow), or, in some stirps (i.e. subsp. uncinata) also in low (arboreal shape; bark of the young branches green, then grey-brown, at times with reddish hues, that initially flakes in small rhomboid scales, with the age in irregular ones. 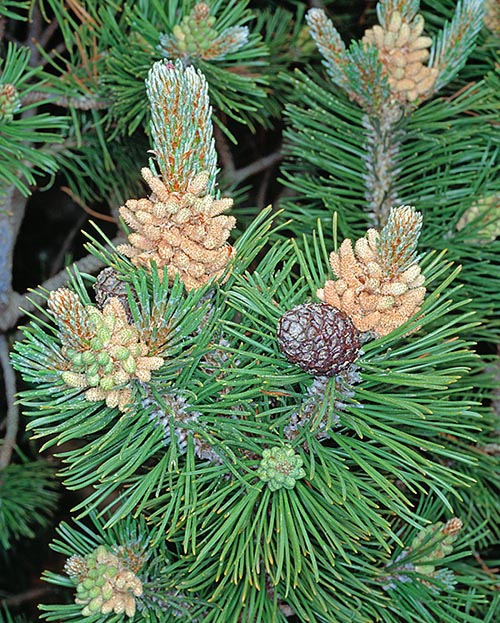 The rooting system is rather superficial but well ramified. Pointed and very resinous buds, evergreen leaves (persistent for 3-9 years), needle-like of 1,3 x 35 (28-45) mm, erect-appressed, in pairs (rarely in three), robust, dark green, rigid, obtuse or sub-pungent, a little twisted, gradually shorter towards the apex of the branches.

The male amenta are verticillate or terminal, yellow or yellow-orange; the female ones are purple-violet. The reproductive period last from May to July and the fecundation and the seeds dispersion are guaranteed by the wind. The strobili (cones) are isolated or sometimes binate, sessile or briefly pedunculate, ovate or conical, 1,5 x 2-5 (7) cm long, symmetrical at the base, reddish and glossy when ripe (after 3 years).

Small seeds, blackish with a thin 8-10 mm wing. Some varieties (or subspecies) of this “collective”, very polymorph species, have been described especially due to the morphological differences of the cones and in the habit (var. rotundata, pumilio, mughus).

The wood of the mountain pine, with whitish alburnum and red-brown duramen, with well distinct rings, is heavy (330 kg/m3) compact, resinous, of average hardness, slow-growing. Even if of excellent quality, due to the modest dimensions reached, it cannot be employed except for small kitchenware, as fuel or for getting cellulose. The mountain pine has mycorrhizae with some species of fungi, like Boletus granulatus, Boletus luteus, Boletus variegatus, Cortinarius muscosus, Lactarius deliciosus, Russula fragilis, Tricholoma virgatum, ecc.

The tangled thickets formed by the populations of mountain pine (pine woods) are avoided by the experienced hikers who well know how is uncomfortable to pass through the tangle of the branches, but are in the meantime much useful for the stabilization of the slopes stopping the descent of the rocky debris.

From the ramuli of the mountain pine they distillate a fluid essential oil, clear, perfumed (mugo oil or mugolio) by the well-known balsamic, antimicrobic and anti-inflammatory of the airways, anti-catarrhal and protective properties, thanks to the content in monoterpenes (pinene, dipentene, phellandren, limonene) and sesquiterpenes (cadinene, caryophyllene, borneol, bornyl acetate that confers the smell of pine), besides aldehydes, alcohols, phenylpropanes, acids, salts, tannin, gum, etc. The mountain pine is a species that multiplies by seed and is used for ornamental purposes in its numerous horticultural varieties, mainly for the creation of rocky gardens and for the creation of edgings and compact evergreen “cushions”. Preparations:

A spoonful of buds in a pot of warm water. Leave in infusion for 15 minutes, sweeten with honey; prepare and drink thrice a day away from meals.

The female ones, initially purple-violet, form sessile corns or briefly pedunculate even 7 cm long. From the ramuli they get a fluid essential oil, clear and scented, with known balsamic, antimicrobic and anti-inflammatory officinal properties for the airways not to forget the anti-rheumatic and antineuralgic virtues © Giuseppe Mazza

A handful of needles, one of buds and two green cones cut into quarters previously macerated for one night in half a litre of warm water. To boil the whole in two litres of warm water; leave to rest fifteen minutes, strain the whole and add the decoction in the tub before going in.