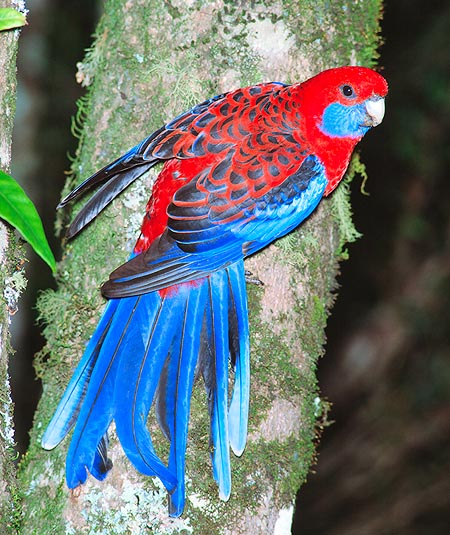 The Crimson Rosella (Platycercus elegans Gmelin, 1788) is a bird afferent to the order of the Psittaciforms (Psittaciformes), family Psittacids (Psittacidae), genus Platycercs (Platycercus).

It as discovered by the Greman botanical biologist and entomologist Johann Friedrich Gmelin, during his exploration trips in Oceania, in the specific, in Australia.

Its common names in English are Crimson Rosella, Red Lowry and Mountain Lowry.

The first English common name, as well as, anyway, the Italian one, indicate the belonging of this species to the variegated group of parrots called “rosellas”, present, with colourful liveries, in various areas under the Wallace line, that is, in the southern part of the area called “Wallacean”.

In zoo-geographic terms, therefore, it belongs to the Australasian ecozone.

In other languages, this spectacular psittaciform is called Periquito de Pennant in Catalan, Pennantsittich in German, Rosella amarilla y escarlata or Perico elegante in Spanish, and Perruche de Pennant in French.

After the IUCN, the populations of these parrots, even if nowadays subject to a certain decrement, do not present serious vulnerability criteria.

In defiance of their showy colours, which might lead to think to a grim trade as companion animals, they do not appear, in fact, into the famous “red list of endangered species” among the animals and vegetables under serious risk of extinction. 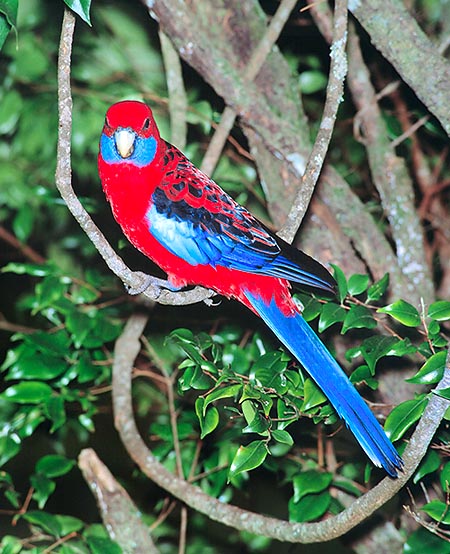 This is because it is absent, in their populations, that decrement greater than the 30% of the original nucleus in more than ten years or three generations, used by the IUCN biologists as warning alarm for assessing the vulnerability of a species.

From censuses made in 1997, after the ornithological biologist Ohyo, the population of such species is still relatively abundant.

The Crimson Rosellas are endemic to eastern Australia and the Norfolk Islands. In Australia, more precisely, they are present in the southern and south-eastern areas. During the eighties of the last century, they have been introduced also in New Zealand, where they have much quickly diffused.

They are regular inhabitants of the tropical pluvial forests, where they carry on and arboreal life seen their zygodactyl foot, but they may be found also in the areas covered by a shrubby vegetation, usually close the water streams, where they often clumsily walk on the ground looking for food.

They have the tendency to invade the plantations, especially in New Zealand, where, after having been unwisely introduced because of their beauty, are nowadays hunted with every means due to the serious damages they may cause to the fruit orchards. They get used quite easily to the presence of humans, and for this reason it is not uncommon, in Australia, to find them also in the parks and in the city public gardens, which they cheer, for the enjoyment of the tourists.

Their alimentary ecology is characterized by a diet based on eucalypti and acacias seeds (granivorous), various herbs (phytophagous), ripe fruits and berries (frugivorous), some species of tree flowers, in particular of the cauliflorous species, not to forget their insectivorous diet, based on larvae and insects. 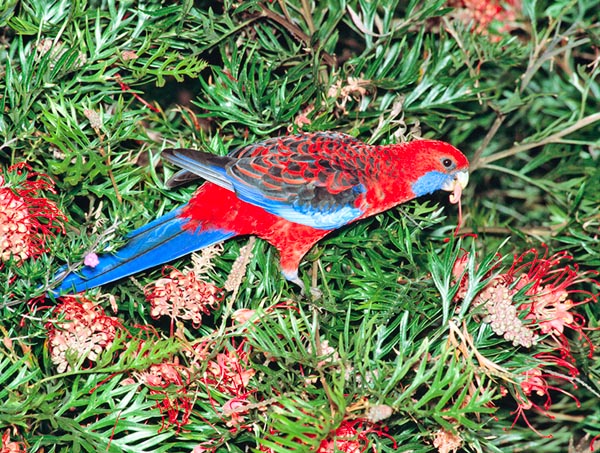 Practically omnivorous, with a fondness for the sweet Grevillea flowers © Giuseppe Mazza

Besides humans, another enemy is the Common cat (Felis catus) introduced in Australia during the first half of the seventies and nowadays became feral.

The male as well as the female, for calling the partner, emit soft two notes sounds (bitonal), “cussik-cussik”, with the second one more markedly pronounced and several soft gurgling.

On the contrary, when menaced and feeling in danger, they emit, while flying away, typical hoarse and metallic sounds.

The very bright crimson red and electric blue livery renders the Platycercus elegans the most beautiful parrots in the world.

The lower parts of the body and the head are crimson red, but a huge violet-blue spot that covers the throat area and the cheeks.

The feathers of the neck, of the back and of the wings are black and bordered of crimson red. More specifically, the primary coverts of the wings in the median part of the wing are black, whilst the coverts in the lower part of the same limb have the outer barbs electric blue. 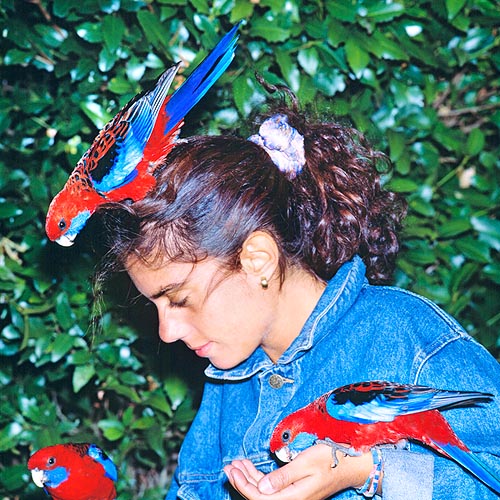 Very sociable, does not fear man, but may destroy an orchard © Giuseppe Mazza

The tail is long, with blue rectrices ending in a white tip. The bill is greyish-white in the upper branch and darker in the lower one. The iris is burnt brown.

Upon the arrival of the sexual maturity, the relevant moulting will determine the formation of the species livery.

Usually, the adults live in small groups, whilst the immature individuals already able to fly tend to unite in great flocks. They nidify in the tree holes at a considerable height; the male, in charge of the construction of the nest, fills up the same with wood chips.