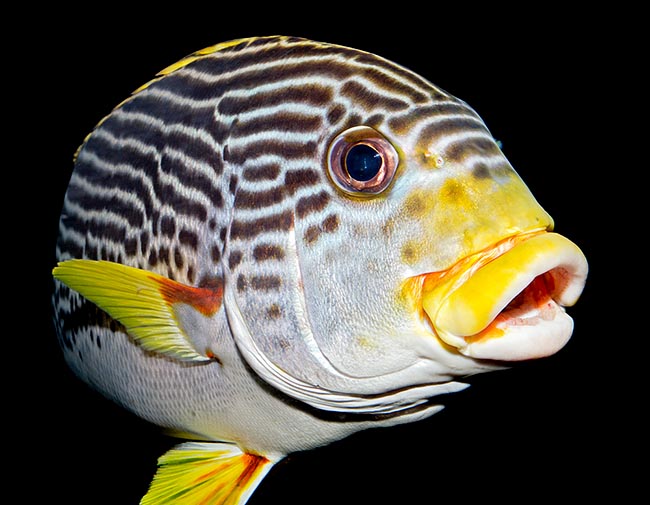 Very similar to Plectorhinchus vittatus, which has its body painted with horizontal stripes, Plectorhinchus lineatus is mainly distinguishable by the marked diagonal black barred design which breaks into spots towards the belly © Giuseppe Mazza

The Yellow banded sweetlips or Diagonal banded sweetlips (Plectorhinchus lineatus Linnaeus, 1758) belongs to the class Actinopterygii, the ray-finned fishes, to the order Perciformes and to the family of the Haemulids Haemulidae, which includes 19 genera and 134 species.

They are mostly marine or brackish waters fishes, reminding at first sight, due to their look, of the sparids or the sciaenids.

They rarely exceed 60 cm in length and often occupy an important rôle in the human alimentation.

The name of the genus, Plectorhinchus, comes from the Greek “epiplektos” = twined, and “rygcos” = snout, with reference to the big lips full of folds. The specific name, lineatus, means in Latin “lined, banded”, in reference to the stripes of the livery.

The Plectorhinchus lineatus inhabits the tropical waters of the Indo-Pacific. 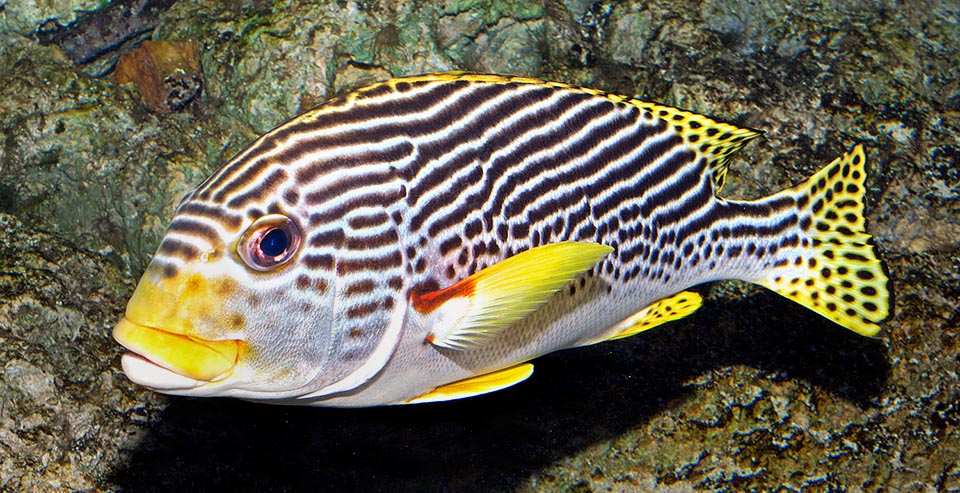 Adults may exceed 70 cm. They live alone or in groups swimming synched looking for molluscs, crustaceans and minnows © Giuseppe Mazza

It lives in relatively shallow waters, without exceeding the depth of 35 m. Frequent in gulfs, bays and lagoons, among the corals, where the young grow sheltered by the madrepore branches. 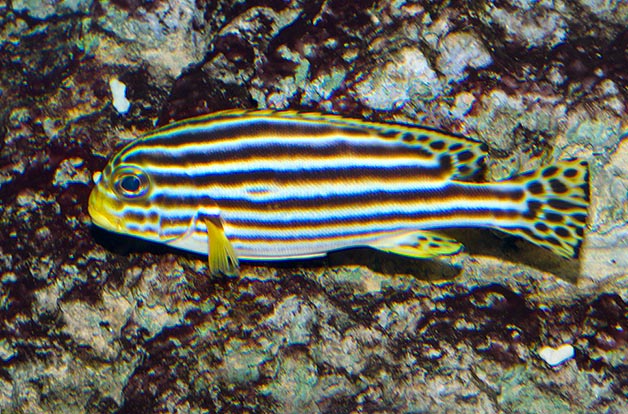 In the subadults the dark belts are decidedly horizontal © Giuseppe Mazza

It may grow over 70 cm long. The body, compressed on the sides, is overall oval, slightly more convex on the back and rectilinear ventrally.

Big fleshy lips and long, solid caudal peduncle with rounded fin in the young, which goes truncate when they grow.

When smaller than 15 cm the overall colour is reddish brown with large white spots. Then the white extends to almost all the body, crossed by dark horizontal and parallel bands. The eyes and the lips are yellow.

In the adults the stripes get increasingly oblique, even breaking into spots at their lower region, at the border with the ventral white colour. It can also be noted a showy reddish spot at the base of the pectoral fins, with traces of this same tone around the thick lips and on the ventral fins. 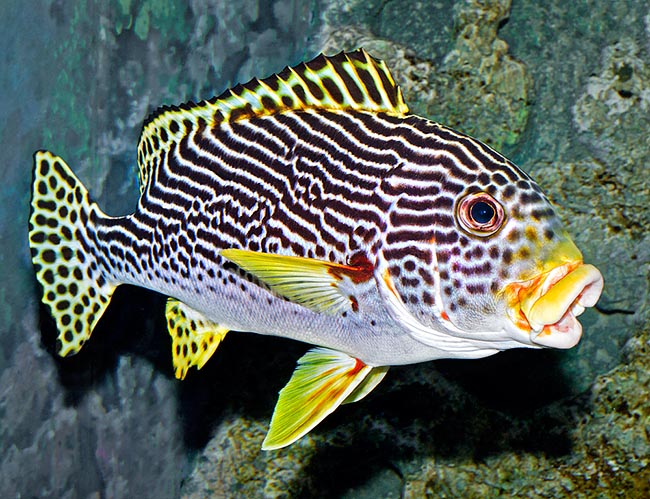 The Plectorhinchus lineatus is a fish that lives solitary or in groups that often swim synched, forming a sort of a multicoloured wall that advances, ravenous, looking for benthic mollusks and crustaceans and some little fish.

It is active mainly during night, when it swims over sandy plains or seagrass beds looking for food, whilst at day it rests among the rocks and corals.

The reproduction takes place in the open sea with eggs abandoned to the currents.

With a moderate vulnerability index, 37 over 100, Plectorhinchus lineatus is not an endangered species at the current time. Albeit having a more limited distribution in comparison to its relatives its situation is not too worrying thanks to the fast development of their fry and their good resilience, having that it takes 1,4-4,4 years to double a decimated of population of this species.