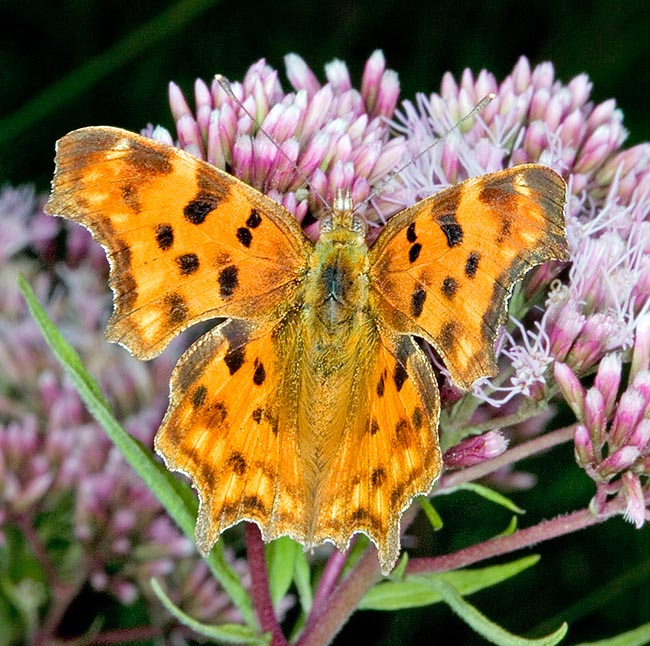 The Comma (Polygonia c-album Linnaeus, 1758), belongs to the order of the Lepidoptera and to the family of the Nymphalidae. This family is diffused in all continents, groups about 6.000 species and is therefore classified as the largest family among the Rhopalocera.

The comma is extremely common and can be found practically everywhere. With its rapid and flashing flight it crosses incessantly its territory quarrelling and fighting with any butterfly or flying insect passing through it. It is pugnacious also with the human being and as soon as somebody gets close to the area controlled by it, quickly runs towards the intruder, inspecting him rapidly and then goes back to its starting point, any small branch or shrub from which it can control visually its territory.

With its very fast flight and the little time left for interpreting its exact shapes we might say, first glance, that it is a strongly chipped and damaged on the wings butterfly. In fact, there is not a single inch of the margin of the wings not having an indentation or a chipping of the margin. It seems to have the wings tattered and when it is possible to observe it carefully still we have the doubt about its integrity.

The scientific name rightly comes from this characteristic. Polygonia in fact comes from the Greek “polus” = many and “gonia” = angle, tightly for the many anglings present on the wings. The name of the species c-album comes, on the contrary, from the white C-shaped comma it has in the cell, on the lower wing verso.

The European vulgar names faithfully report this characteristic but the French which has adopted a very odd name referred to a medieval character, perhaps non-existent, who was said to be the son of the wife of the Duke of Normandy and of the Devil, Robert le Diable, story then taken in a Meyerbeer’s melodrama in 1831. The vernacular Dutch name Aurelia conversely refers to the Latin aureus = golden, due to the reflections of such colour shown on the upper face of the wings of this butterfly. In English, Comma butterfly; in Spanish, C-blanca; in German, C-falter; in Dutch, Gehakkelde Aurelia; and, rightly, in French, Robert le Diable.

The Comma has an extremely vast area of diffusion. In Europe it is found everywhere excluding the northern part of the Scandinavian Peninsula and some areas of Scotland. It lives in the Mediterranean North Africa, reaching also the southern Morocco. It is spread in Asia in the temperate belt and has its eastern limit on the coasts of the Pacific. 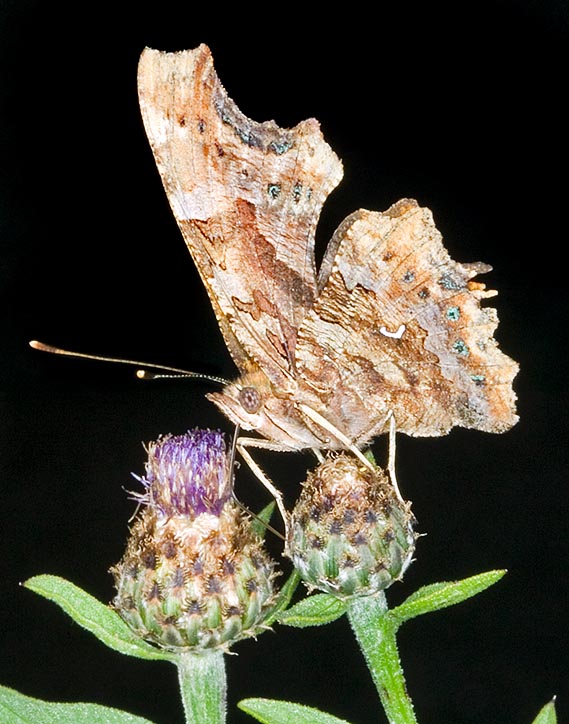 Its life is based on mimicry: is invisible with folded wings and the caterpllar looks like a bird dropping © Giuseppe Mazza

There are similar species living even in North America. The species is rarely abundant but is regularly present in all the occupied territories.

In the Mediterranean area it overlaps to a species much similar, morphologically as well as for the behaviour. It is the Polygonia egea of much paler and yellowish colour with a small Y-shaped drawing in the cell of the lower page, instead of the typical C.

It lives in the most varied habitats, but prefers the well wooded and full of shrubs country lanes but with ample spaces of movement. It is found also in flowery gardens, parks and prairies rich of floral essences. It lives from the sea level up to the 2000 m of altitude.

The comma has a wingspan of about 45 mm. The wings, as we have already mentioned, are very jagged and present prominent indentations on the fore wing as well as on the hind one. On the hind ones three of these shreds assume the look of an attempt of tail and especially one of these, placed laterally, often exceeds the 5 mm of length.

On the recto of the wings its has a golden-amber colour, very bright, dotted with round black spots and by paler ochre streaks. The verso has a general brown grey colour with various streaks rather speckled and with a darker ample basal area that includes the cell, in which appears this white comma shaped like a C that characterizes it from any other butterfly and which gives it the scientific name.

In the first generation, the comma has rather faded colours if compared to the summer one but in any case it is always and anyway an unmistakable butterfly.

The antennae are black, long and robust, clavate in the terminal part. The club is yellow. The male is smaller than the female with a more marked colouration.

When this butterfly perches it usually keeps, as for all the nymphalids, the wings folded on themselves becoming absolutely invisible and resembling a withered leaf. Its prominent indentations render it absolutely similar to a piece of crumpled leaf. This allows it to spend the winter at the stage of imago concealed in a perfect “camouflage” in the cracks of barks in the trees and also hidden among the withered leaves of the under-wood. Above all, the hibernating generation has a much darker and streaked colour that facilitates even more the camouflaging.

It is a bivoltine species and the second generation hibernates at the adult stage. It is possible, however, to see it flying all over the year as occasionally it wakes up, even for a few hours, in the warm winter days for a short flight and then going back to its shelter. 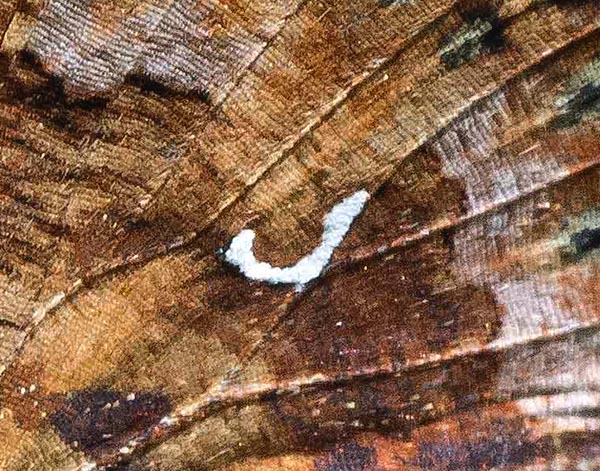 Peculiar characteristic that has named the species, is a white C on the lower wing verso © G. Colombo

The hibernation ends with the first days of March and after a short time of feeding, it lays its eggs which will hatch by the beginning of the month of June, thus giving life to the summer generation.

It is much prolific and can lay up to 200 eggs of pale green colour which will become, after a few days, yellowish. They are laid singly on the outer edges of the upper page of the leaves of the host plants.

The second generation comes to life by the end of summer and even by late September. The butterfly flies anyway up to November with the aim and the greed to rake in the largest possible amount of proteins to get through the winter.

The caterpillar is born after about three weeks from the deposition and moults 4 and 3 times respectively in the first and second generation.

Fairly easy to breed on plants of the genus Urtica, is quite characteristic: it has a brownish colour bristling with whitish thorns on the whole body and carries an ample dorsal band well evident covering the back mid of the body.

When positioned over a leaf it results perfectly similar to the excrement of a bird. It can be said without any fear that all the life of this butterfly s strongly based on the mimicry.

Like for all the Vanessae, the pupa is hanging upside down tied with the cremaster and is ochraceous with small silvery white dots. Also this is perfectly similar to a small leaf crumpled up on itself.

Many are the host plants. From the nettle to the currants, the hops to the willow, elm to hazel trees, but with a strong preference for the genera Humulus and Urtica.