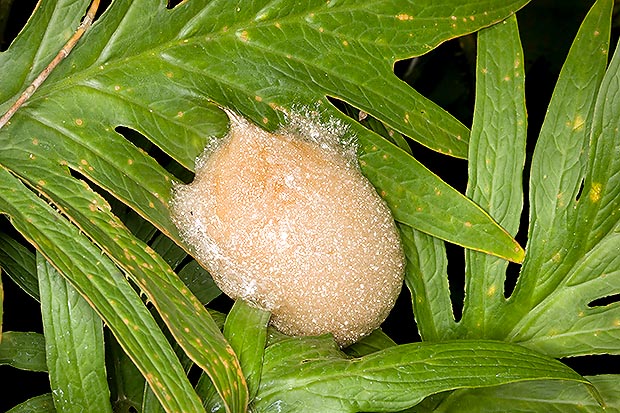 The Polypedates leucomystax lays its eggs on a hanging nest, above the water level © Giuseppe Mazza

The Four-line tree Frog or Malaysia tree Frog (Polypedates leucomystax), discovered by the English batrachian specialist and biologist Gravenhorst in 1829, is a particular species of Anuran (Anura), belonging to the family of Rhacophorids (Rhacophoridae) endemic to Indochinese and Asian geographic area.

By the beginning, this species was called (Rhacophorus leucomystax) by the biologists, and it is found especially close to the centres with strong human activities: rural villages and roads passing through the jungle, crossed with ease, in defiance of the cars, by these small amphibians while looking for ponds where to reproduce.

The Polypedates leucomystax are endemic and autochthonous to several Asian and Indochinese geographic areas: Thailand, Vietnam, Cambodia, Laos, Burma or Republic of the Union of Myanmar, southern China, but they may be found also in the Java Island and up to Nepal and the Philippines, from where, thousands of years ago, the species should have spread around. Recent censuses done by the biologists have revealed specimens also in the north-east of India, which seem of not having been imported.

Preferably nocturnal and arboreal, these amphibians love the pools and the ponds surrounded by broad leaf plants, where the females lay the eggs, at several centimetres of height above the water surface. It is a unique case, in the vast world of the anurans, as it strikes also, in ecologic terms, the fact that the Four-line tree frog is almost never located inside the primary rainforest, but only close to the inhabited areas.

The adult individuals, both males and females, have a small size. The females are little bigger (7-8 cm of length, from the tip of the snout to the base of the cloaca, vs. about 5-6 cm of the males) and therefore there is a certain sexual dimorphism. The legs are well shaped, very slender, tapered, especially the back ones, suitable for locomotion by jumps. The fingers, four for the fore limbs and five for the hind ones, end with small button and bubble-shaped expansions, which are of help in having a good grip on the smooth and wet surface of the great green leaves, where the deposition of the eggs and their fecundation take place. In both sexes the livery has a usually pale-tobacco maroon colouration, with four lines, always brown, with darker tonality (whence the English common name Four-Line and “tetralineata” in Italian), running along the back longitudinally, and continuing on the hind legs, at the level of the femoral zone (thigh) as well as the tarsal-tibia zone, with transversal trend with horizontal band. 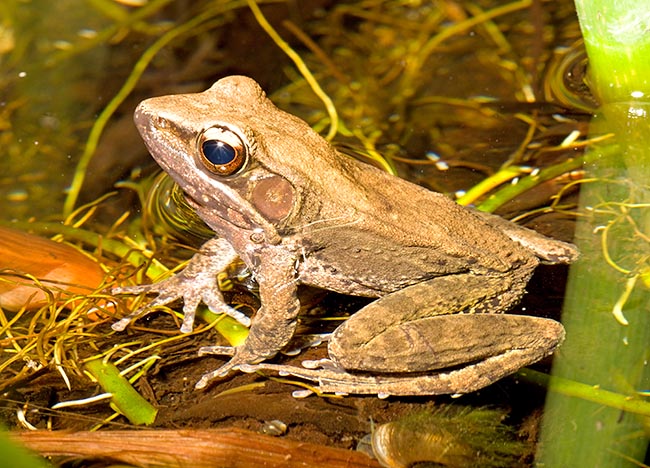 In some subspecies there is a triangle drawn on the head and a weak dotting of the body. Other subspecies have thin horizontal white bands running along the cheeks up to the base of the ocular orbit, whence, perhaps, the name “ leucomystax “, chosen for this anuran. And the greyish-marmoreal liveries, with beige shades, are not missing. The development, after the fecundation of the eggs, which have been laid on wide or fringed leaves, as for the ferns, is of the indirect type. We go, that is, through a larval form with polliwogs. These ones, after the incubation in the aerial nest, fall inside the underlying pond, reaching the 3-4 cm of length, with a quite sharp tail called “flagellum”. It seems that the sunlight plays a key role in the water, as stimulator-promoter of growth and metamorphosis.

The adults eat small fishes, molluscs and invertebrates, both aquatic and typical of the soil fauna of the banks, whilst the preferred meal of the tadpoles is formed by small insects and aquatic larvae. It is a much greedy species, in turn actively preyed by serpents such as the Gonyosoma oxycephala or other Asian colubrids.

They are, as already briefly said, animals with a mainly crepuscular-nocturnal arboreal life, and therefore their ethology and reproductive biology have adapted to this situation. In fact, they nourish mainly by twilight, night and until the first lights of dawn, then remain resting during the day, and also when bred in a terrarium, they need about 12 hours of day light in order to maintain their biologic rhythm.

The reproductive cycles are characterized by courting stages. It would seem that the variations in ambient relative humidity do stimulate the males, when close to a pond or after a heavy rain typical of those biotopes, to emit mighty raucous croaks. These are showy “attracting sexual sounds”, to which the female just replies moving towards their source with powerful jumps. We have to keep in mind that a pond or a puddle of water may attract different species of Anura, with many heterospecifics, such as the Rhacophorus reinwardtii, but in order to avoid hybridizations, the females of Polypedates leucomystax, have developed, evolutionarily speaking, the capability to reply only to their males. This guarantees the perpetuation of the species, even if, rarely, there may be cases of interspecific crossings.

The spawning, with relevant fecundation, happens a few days after the formation of the pair, thus giving time to the female to increase the alimentary charge of proteins, necessary for the ripening of the active ovarian follicles. Several tens of virgin eggs are immersed in protecting and hydrating foam, suspended in a sort of flattened nest, several centimetres over the water. Then the male comes into play fecundating them and then keeping watch and becoming aggressive, with intimidating choirs directed to the other conspecific males. And if they dare to approach, the fights are then in the agenda.