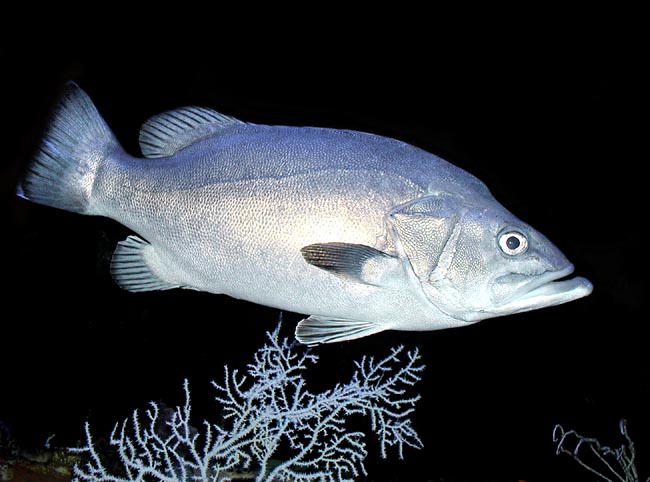 The Atlantic wreckfish (Polyprion americanus Bloch & Schneider, 1801) belongs to the class of the Actinopterygii, the ray-finned fishes, to the order of Perciformes and to the family of Polyprionidae.

The name of the genus comes from the Greek “poly” = much and “prion” = saw, that is, it’s a fish which “saws a lot”, considering the fact that it is covered by small, ciliate, ctenoid scales, very rough, not to talk about the scabrous crest of the operculum, the sawtoothing of the preoperculum and the numerous spines.

The name of the species, “americanus”, would be simplistic to be defined as coming from “American”, seen that it is present, with variable density, on the Atlantic coasts of North and of South America, but it was so christened in Germany by Johann Gottlob Theaenus Schneider and Marcus Elieser Bloch in their monumental opus about fishes “Systema Ichthyologiae iconibus cx illustratum”, dated 1801. Like Linneo, Bloch also had his contacts in further countries and for this species he described, as himself explains us, an individual sent by Dr. Latham, his American correspondent.

The Polyprion americanus has an extremely vast, but irregular. Except America, we find it in the Mediterranean and on all the Atlantic coasts, from North Europe up to the Cape of Good Hope in South Africa. From here, it move into the Indian Ocean going northwards up to Mozambique. And it has been fished also in New Zealand, where it is strictly protected.

Usually, it lives in the grottoes at 100-200 m of depth, but it has been sighted even at 1.000 m. It loves the sunken ships, where it establishes its house, so much to justify its English name, and the younger specimens, for training, can be found often in surface under floating wooden boards and scraps going adrift.

Even if, usually, they are smaller, the Atlantic wreckfishes may exceed the 2 m of length and the 100 kg of weight. The body is stocky and squared, and the head, by sure, does not go unnoticed, massive not to say armoured, with steep profile and the protruding lower jaw. It has a slight depression over the eye and a huge operculum with a solid bony crest in relief, almost horizontal and scabrous. 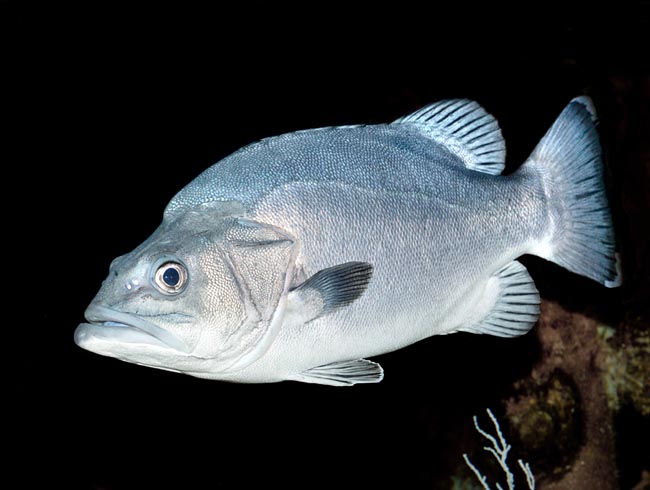 Greedy hunter of cephalopods, crustaceans and fish, it may be 2 m long and weigh 100 kg © Giuseppe Mazza

The preoperculum is denticulate, the nostrils are wide and tight, the eyes are big, in order to see in the darkness.

The mouth, enormous, is armed by countless conical teeth. They are solid, placed in bands on the jaws and inside the buccal cavity, at times even on the tongue.

The colouration is bluish-grey in the upper part, it progressively fades on the sides, and finally becomes silvery on the belly. In the young, the edge of the fns is whitish, and they show black dots on the head and the body. The old specimens get darker with the time, with brown and vinous shades, whilst the belly turns to the yellowish.

It is a very greedy animal, often solitary, which hunts cephalopods, crustaceans and benthic fishes.

It is a permanent gonochoric species, which means with stable and separated sexes. The reproduction takes place in summer, as it is shown by the catches of plankton containing pelagic eggs, and the young reach the 10 cm when one year old. Due to the depth where it lives, it is not easy to say till which point this species is endangered. But it is clear that prized fishes of big size, slow-growing, are seriously menaced by the modern fishing industry, even if in some nations they have voted protecting measures. On the other moment, at this stage, it is impossible to estimate the population of the Atlantic wreckfish, which performs, among other things, incredible migrations, as proved by the European fishing hooks often found on the animals caught overseas, along the American shores.

The vulnerability index of this species is of 72 over 100.