The genus Polytelis is formed by three species of Australian parakeets, of quite considerable dimensions and having a long tail. These are the Polytelis swainsonii Desmarest, 1826, the Polytelis alexandrae and the Polytelis anthopeplus. Due to their elegant appearance, the eye catching colours and their docility, they are, since long, the favourites of the breeders, and are very much present, for the same reasons, in the zoological gardens and the aquatic parks. It is very easy to feed them, and this is another advantage for their breeding, as they accept a mix of common small seeds: canary seed, millet, oats, wheat and little hemp; this diet is often integrated with sunflower seeds and peanuts.

The Polytelis swainsonii was discovered by the French ornithologist biologist Anselme Gaëtan Desmarest in 1826, during his trips in Australia. The common names characterizing this member of the Psittacidae in the various parts of the world are very odd: in English Superb parrot, in Czech Papoušek nádhern, in Slovakian Králcik nádhern, in German Schildsittich, in Italian Parrocchetto di Barraband or superbo, in French Perruche de Barraband, in Spanish Perico Soberbio, in Dutch Barrabandparkiet, in Swedish Gulstrupig parakit, in Japanese Mikazukiinko and in Danish Barrabandparakit; but also the Latin synonym Polytelis swainsonii, which was utilized before the first half of the last century in lieu of Psittacus swainsonii. They are inserted, even if fairly known, in the red list of the IUCN, as in the wild their demographic density is increasingly rarefying.

They are endemic to south-eastern Australia, in particular to the region of Victoria and of the New South Wales.

They love the luxuriant Eucalypti (Eucalyptus camaldulensis), forests, of south-eastern Australia, present along the banks of the rivers but they do not disdain the areas with Australian Mediterranean maquis (so called because the vegetation is formed by mid height plants and low trees) and the bush, even if the zygodactylous foot favours them in an arboreal life; they may, however, walk at the base of the plants, where they go to pick up fallen seeds, some ripe fruits or for tearing off tufts of fresh grass with which they integrate their diet. 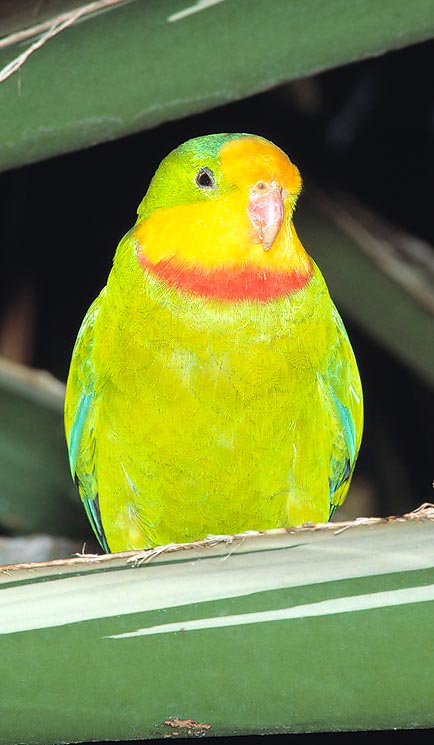 For instance, they are greedy of berries of hawthorn, elder, and of rowan. Often these splendid birds may, while seeking food, move in the woody inland, from the rivers areas where the nests are built, covering distances of even 15 km.

The male of the Barraband’s or Superb parrot (Polytelis swainsonii) is a really extraordinary bird, with yellow face and red sickle-like border.

Its colouration and its proportions are very much elegant. More precisely, the male has a bright red band on the chest, in the transition point between neck and thorax, the throat is bright yellow, whilst the cheeks are bright green, like the upper part of the head, which often has a small area of turquoise blue feathers, which looks like a dot.

The back and the dorsal part of the neck are bright green, including the primary and secondary coverts of the wings and the remiges; some of these last ones they may have a slight turquoise colouration. The belly is always bright green, but less dark.

The female does not have this colouration so much variegated and bright, the face presents dirty white-grey feathers, which on the throat become bordered by a pale pink, the body and the head are totally of a dull saurian green, also the tail feathers are bordered of pale pink. In reality, a certain number of remiges and primary coverts, in the female, have variations of shades of green, which are quiet evident.

These are characters of stable sexual dimorphism which allow to distinguish them at sight; furthermore, the adults of both sexes have a yellow iris, whilst, when immature, the iris is brown.

The tail is perhaps the most special character of these birds, in both sexes is a fairly long organ, in the male has, however, a sickle-like structure, compact-slender ending with a tip, getting narrower from the base, connected to the body, and the rectrices composing it have a black colouration. For this reason, it stands out against the rest of the body, like a pointed black structure, well visible while flying.

The tail of the female, on the contrary, is much more modest in beauty, always much long, but is broader and frayed, the rectrices are all green, what slightly varies between them is a slight shade of the colour.

The individuals of both sexes, have equivalent dimensions (40-42 cm of length) fairly big among the various genera of parakeets (Aprosmictus, Barnardius, Bolborhynchus, Eunymphicus, Psephotus, Psittacula, Touit, Neophema, Purpureicephalus, Alisterus), and for reason, when captive, they need fairly ample aviaries. Their lifespan has an average of 25 years.

Like the other species of parakeets, also the Polytelis swainsonii, is a very docile bird, lively and who becomes attached to those care it. Like all Psittacidae, they are much intelligent, even if not characterized by imitating characters, and very melodious.

From the reproductive point of view, they have long periods of inactivity, therefore trying to recreate a population in the wild or in captivity, for then, later on to free them, to try in this way to reduce and stop their progressive rarefaction caused by the pressing urbanization phenomena, is not a so immediate and simple task.

The male during the coupling time, takes care of the construction of the nest, on an eucalyptus tree, for instance; the female cares the incubation of the four-five eggs she has laid, for 20-24 days; from their hatching the pullets will come out with a brown iris and a colouration of the transition feathers similar to the mother’s livery, which will turn to bright and variegated colours once the sexual maturity comes, in about 3 years, for the male and remaining fairly eclipsed for the females. The pullets will remain in the nest for about 50 days, period during which they are fed by the father’s regurgitation. It will also take care to provide food to the partner; after this time, the young will leave in order to carry on their own life.

These animals are easily subject to fractures to the foot and to eye ailments due to stress, especially when kept in captivity. The CITES, seen the rarefaction of the wild populations, is increasingly limiting their trade for commercial purposes; the IUCN is trying, by means of repopulation programmes, to reconstitute their demographic density.