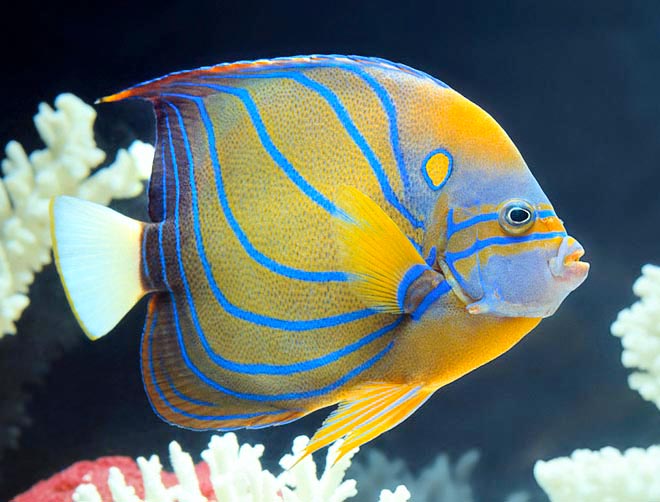 Pomacanthus annularis mainly lives in the Pacific Ocean, but also in the Eastern part of the Indian Ocean © G. Mazza

The unmistakable and showy Bluering angelfish (Pomacanthus annularis Bloch, 1787) belongs to the class of Actinopterygii, the ray-finned fishes, to the order of Perciformes and to the family of Pomacanthidae.

The name of the genus comes from the Greek “poma” = cover and “akantha” = spine, with reference to the spine on the operculum.

The name of the species “annularis” refers to the unusual blue ring, placed in the fore part of the body, over the operculum.

It is mainly present in the Pacific Ocean, but also in the eastern part of the Indian Ocean. As an indication, we find it in Mozambique, India, Sri Lanka, Andaman Islands, Thailand, Malaysia, Indonesia, New Guinea, New Caledonia, Philippines, Taiwan and China up to southern Japan. Eastward, it stops towards the Solomon Islands.

It lives in the madreporic formations up to 30 m of depth, even if it is more frequent between the 5 and the 15 m.

The bluering angelfish can reach the 45 cm. The body, almost roundish when the fins are spread, is compressed laterally with one spine at the base of the operculum, as the scientific name states. 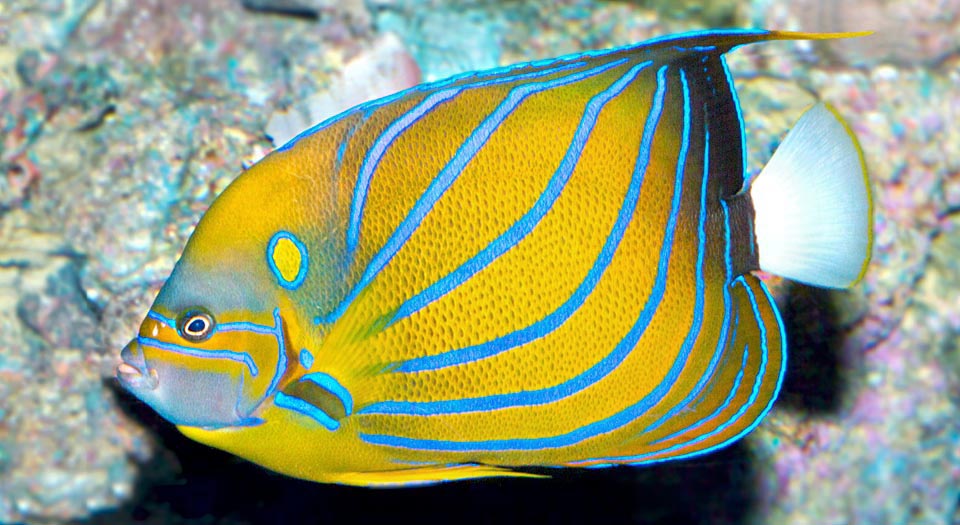 Omnivorous, it mainly feeds on sponges, tunicates and coral polyps, but also on small fishes and algae © Giuseppe Mazza

The background colour is golden brown or orange with curved blues stripes which spread from the pectoral fin. From one side they interest the body and from the other the operculum with two parallel lines, united at the base, by a perpendicular trait. They are present also on the fins which show at times some red traits. The head has two bluish zones at the level of the mouth and over the eye, before the characteristic ring-shaped pattern. The tail is white with yellow margin.

The juveniles have quite a different livery. They are black before, with white and blue vertical stripes, then blue with pale patterns, finally, the tail becomes white and get progressively the appearance of the adults.

The bluering angelfish is territorial. Usually, one male with 2-5 females defends a zone of about 6-10 m2. It is omnivorous. It nourishes mostly of benthic invertebrates, such as sponges, tunicates and coral polyps, but also of small fishes and seaweeds. 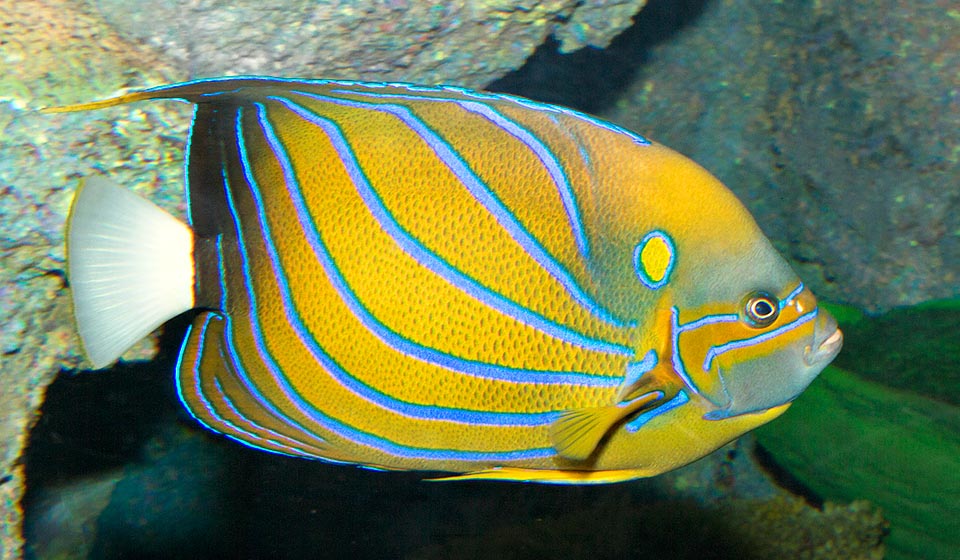 Juveniles have a very different livery from the adults ones, passing through various stages. The males, which can reach 45 cm, are very jealous of their small territory, where they usually live with 2-5 females. When they die, the largest of the group very often inherits the harem, changing sex © Giuseppe Mazza

It is a protogynous hermaphrodite species. At the beginning all specimens are females and later on, while ageing, they become males. The couplings take place in surface, at dusk: it can involve a male with one female or contemporary union with the females of its small harem. The fecundated eggs hatch the following day and the larvae carry on a pelagic life for about one month. The juveniles are at home in very shallow waters, among the rocks and the dead corals rich of filamentous algae.

The Pomacanthus annularis can live even 25 years in an aquarium, but needs big, well kept, pools and even if it is very often fished for the aquaria trade, it is not by sure a house fish. The populations may double in 1,4-4,4 years, and even if the varied diet protects it against the climate changes of the reef, it has a moderate vulnerability risk of 40 per 100.